The risk of megafloods is increasing dramatically as global temperatures rise and store more moisture in the atmosphere. We are not as prepared as many assume. For California, history provides interesting insights. The question is when the next megaflood will occur—and not if this will happen.

Atmospheric rivers that reach the west coast of North America have been a frequent news topic in the past few winters. These enormous bands of moisture originate in the tropical Pacific Ocean and can flow eastward for thousands of miles, drenching coastal areas with rain and dumping heavy loads of wet snow over mountains. California relies on atmospheric rivers for roughly half of the annual rainfall, but flooding is inevitable when a rapid succession of powerful winter storms occur. The risk increases when storms stall over a particular area for a prolonged period and drop an enormous amount of water. 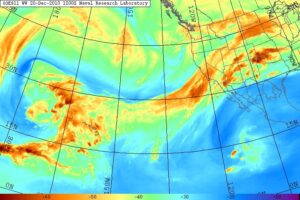 Water vapor imagery of the eastern Pacific Ocean from the GOES 11 satellite, showing a large atmospheric river aimed across California in December 2010. This particularly intense storm system produced as much as 26 in (660 mm) of precipitation in California and up to 17 ft (5.2 m) of snowfall in the Sierra Nevada during December 17–22, 2010. (US Naval Research Laboratory, Monterey; Wikipedia)

We have indications of what could happen from the Great Flood of 1861-1862 – the largest flood in the recorded history of Oregon, Nevada, and California. Over a period of about 43 days, almost 10 feet of rain fell in parts of California, and snow piled high in the mountains. Then, a warm storm melted much of the snow, sending a tremendous quantity of water cascading downhill. There was devastating flooding over an area that may have been as large as 6,000 square miles (16,000 sq km), including inundation of the entire Sacramento and San Joaquin valleys. In some areas, the floodwater reached depths of up to 30 feet (9 m). Neighboring states also experienced flooding as the storms moved farther east. My post Fear of Flooding has details about this event.

Researchers at the US Geological Survey developed a hypothetical but realistic megastorm scenario in 2010 as part of a Multi Hazards Demonstration Project, which uses hazards science to improve resiliency and loss reduction to natural disasters for communities. Based on data from geologic and historical records, the “ARkstorm” scenario reflects the exceptionally intense winter storms of 1861-1862 and also incorporates detailed information from large California storms in the winters of 1969 and 1986. 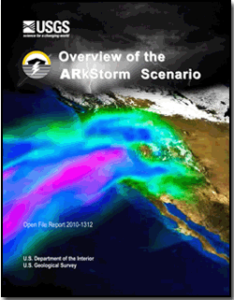 Image of cover of USGS Open File Report 2010-1312. Model image is of the enormous atmospheric river that may have been present during the 1861-1862 flood event. (Wikipedia)

The ARkstorm name given by the USGS researchers combines the terms “atmospheric river” with the “k” for 1-in-1000-year event, as that is what the researchers expected the scenario to be at the beginning of the study. Remarkably, however, they found that the Great Flood of 1861-1862 is not the worst case for California. In the past 1800 years, the geologic record shows six megastorms more severe than 1861-1862. Six! And there is no reason to expect that similar events will not occur again.

The ARkstorm modeling is based on severe storms from atmospheric rivers, with one focused on Northern California and another on Southern California, just four days apart. According to this scenario, devastation would occur over much of California. Key findings are:

–Thousands of square miles of urban and agricultural land could flood throughout the Central Valley, the San Francisco Bay Area; San Diego, Los Angeles, and Orange counties, and coastal and riverine communities throughout the state. Flood depths could be on the order of 10 to 20 feet (3 to 6 m), requiring the evacuation of hundreds of thousands of people.

-Heavy rain would also cause thousands of landslides and disruptions that could last for weeks, costing on the order of $400 billion in property damage and $325 billion in business-interruption losses (2011 USD). Critical transportation corridors could remain unusable for months.

Based on historical records the return period for ARkstorm is estimated to be about 200 years. Global warming, however, is changing the storm picture. 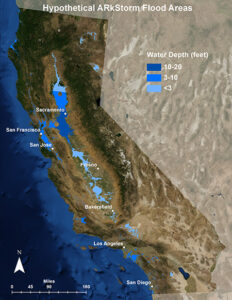 A diagram of the flood areas of the December 1861-January 1862 Great Flood. The same areas are expected to be flooded again if another ARkStorm was to impact California;such an event would have severe impacts on the entire U.S. economy. (USGS, 2013; Wikipedia)

More recently, hydrologists have performed climate simulations with month-long sequences of atmospheric river storms, published in the journal Science Advances in August 2022. Named “ARkStorm 2.0” the modeling is based on severe storm and flood scenarios that consider long-duration (30-day) storm sequences with bursts of high precipitation intensity. The result: catastrophic flooding. If flooding similar to that occurring in 1862 happened today, it would displace up to 10 million people, submerge many cities, close major freeways for months, and overall result in a $1 trillion dollar disaster. The resulting economic and supply chain blockages would be felt worldwide, given California’s status as a food-producing powerhouse.

The scientists cite recent estimates that suggest floods equal to or greater in magnitude to those in 1862 have a 100- to 200-year recurrence interval (i.e., a 1.0 to 0.5 annual likelihood). They also show that the likelihood of such a megastorm sequence is increasing strongly as a function of climate warming. With increased global temperatures, the jet stream that steers weather systems high above the Earth is expected to slow, resulting in heavy rains, as well as heat waves, that linger. Warmer temperatures result in freezing levels at higher elevations, so there is more rain and less snow. The increase in runoff from the areas of heavy rainfall will cause flash flooding and mud and rockslides to increase in severity.

The results of ARkstorm 2.0 show that an increase in the frequency and intensity of storms from atmospheric rivers is already underway. By ~2060, a megaflood event that previously occurred once every 200 years or so may occur approximately three times per century. The researchers suggest 20th century flood hazard mapping, emergency response plans, and infrastructure design standards may already be out of date as our climate warms in the 21st century. Grim.

A Closer Look at Flood Hazard in Los Angeles

Researchers led by a team at the University of California, Irvine, studied how floodwater from a major storm would move through the city of Los Angeles, the second largest city in the US with a population of about 4 million. In a study published in August 2022 in the journal Nature Sustainability, they report the results from modeling 24 hours of rain that have a 1 percent chance of occurring in any year. A high-resolution topographic map incorporates the infrastructure of flood control channels and culverts, many of which are clogged with sediment and vegetation that would block water flows. The modeling of water movement shows that hundreds of thousands of people (median 425,000) and tens of billions of dollars (median US $65 billion) in Los Angeles are exposed to flooding of greater than one foot (30 cm) within the 100-year flood zone.

Flood hazard maps for the United States are compiled by the Federal Emergency Management Agency (FEMA). The variability of data available means the accuracy of these maps is uneven. The detailed study of floodwater movement in Los Angeles shows the flood risk in Los Angeles is actually more than an order of magnitude larger than what FEMA projects. More than ten times larger – yikes! This substantial underestimation is almost certainly true for other cities reliant on FEMA maps. Definitely scary!

There are ways to mitigate the risks of flooding. These include floodplain restoration and levee setbacks—plus clearing debris from existing flood control channels. We also need emergency evacuation and contingency plans that can accommodate the possibility of widespread inundation and transportation disruption. Public acknowledgement of the risk of megafloods is increasing slowly.

As for the winter of 2022-2023, a strong atmospheric river caused widespread flooding and numerous landslides in central California during the weekend around New Year’s Eve. The region had a chance to dry out for a few days, but as I’ve been writing this post, another major storm from an atmospheric river is underway, bringing heavy rain and high winds. Multiple warnings about flooding, fallen trees, power outages, and landslides are being broadcast– and more rain is predicted in the days ahead as a series of storms roll in from the Pacific. After many years of drought, California needs water–but too much in too short of a time is definitely a set up for disaster. The question lingering in the back of my mind: what will be the timing of the next megaflood in California?

Figure showing water vapor imagery of the eastern Pacific Ocean from the GOES 11 satellite, showing a large atmospheric river aimed across California in December 2010. This particularly intense storm system produced as much as 26 in (660 mm) of precipitation in California and up to 17 ft (5.2 m) of snowfall in the Sierra Nevada during December 17–22, 2010. United States Naval Research Laboratory, Monterey; Wikipedia.  https://en.wikipedia.org/wiki/Atmospheric_river#/media/File:Atmospheric_River_GOES_WV_20101220.1200.goes11.vapor.x.pacus.x.jpg

Image of ARkstorm Scenario report cover, USGS Open File Report 2010-1312. Model image of the enormous atmospheric river that may have been present during the 1861-1862 flood event.  https://en.wikipedia.org/wiki/ARkStorm#/media/File:Coverthb.png

Diagram of the flood areas of the December 1861-January 1862 Great Flood. The same areas are expected to be flooded again if another ARkStorm was to impact California, which is predicted to cause over $750 billion (2011 USD), making it more disastrous than California’s long-overdue major earthquake. USGS, 2013  https://commons.wikimedia.org/wiki/File:California_ARkStorm_Flood_Areas.jpg