Dogs have been human companions for thousands of years. Unraveling their history of domestication is ongoing, with sophisticated sequencing of mitochondrial genomes and examination of coprolites or fossilized feces (yup, poop) providing fascinating insights. As the first animal species domesticated, dogs altered human relationships with the natural world and profoundly influenced the course of early human history. Of special interest to me are new data indicating that dogs most likely accompanied the first explorers as they traveled southward from Siberia and fanned out across the Americas.

Tens of thousands of years ago, in the cold and harsh environment of Siberia during the Ice Ages, people and wolves interacted as they would have been drawn to the same prey species. There may have been mutual scavenging of kills, and wolves were probably also attracted to human campsite debris. Genetic data suggest that the long road to domestication for Arctic wolves began by about 26,000 to 20,000 years ago.

Archaeologists believe that ancient dogs may have assisted people in hunting, warded off predators, acted as alarms, provided a food and fur source–and served as convenient bed-warmers. (Rock band history note: the American band Three Dog Night, founded in the ‘60s, reportedly was named after the aboriginal Australian practice of sleeping next to native dingo dogs on nights with freezing temperatures, although some dispute this story.) 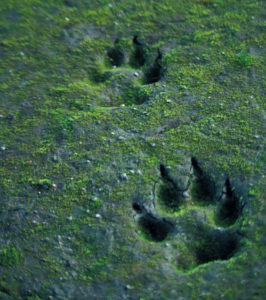 Genetic studies suggest that all ancient and modern domesticated dogs (Canis familiaris) worldwide share a common origin from Old World gray wolves (Canis lupus). There are three major ancestral lineages: western Eurasian, east Asian, and an Arctic lineage. From these origin regions, dogs were dispersed around the globe as they accompanied people. The lineage of native American dogs has almost completely disappeared, as European dogs replaced them after Europeans arrived in the Americans.

A fragment of a dog’s femur recently found in a cave in southeast Alaska has been radiocarbon dated by researchers to about 10,150 years ago. Analyses also show that the dog had a marine diet. The bone fragment is one of the oldest, if not the oldest, dog remain found in the Americas. Based on DNA comparisons, the animal likely belonged to a line that separated from Siberian dogs around 16,700 years ago. This timing suggests that dogs were domesticated before that time, and that the dog’s ancestors accompanied people who left Asia to travel to the Americas. Although there is no direct evidence of humans in North America in that distant past, archaeologists have proposed migration southward via the Kelp Highway. The image of dogs sharing boats with their human companions as they explored the Kelp Highway together is appealing! (For more details about this migration, check out my post, The Kelp Highway.)

Ritual burials of dogs demonstrate the unique and close social relationship between dogs and humans. The earliest generally accepted domestic dog was found in a human burial dated to about 15,000 years ago at the Bonn-Oberkassel site in Germany. Archaeologists have also found numerous ancient dog burials in North America. At the Koster and Stilwell II sites in the state of Illinois, there are several individual domestic dog burials that have been dated to around 9,500 years before present. The Egyptians revered animals, considering them crucial to both physical and spiritual survival, and they mummified dogs along with a variety of other animals. The earliest non-human animals mummified in Egypt date back to approximately 7,000 years ago. 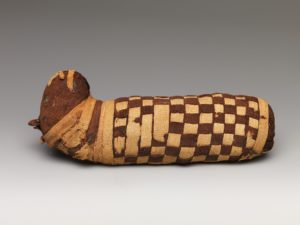 The Moche culture that thrived on the north coast of modern Peru between about 100 and 800 CE interred dogs in elite burials. Archaeologists have found the remains of dogs in at least 15 Moche tombs. Since most of the burials contain only the skull and jaw, or other selected dog parts, archaeologists suggest that the ancient ones consumed the meat, possibly as part of ceremonial rituals. They found complete dogs within the tombs of two high-ranking dignitaries, the “Lord” and “Priest” of Sipán (named after the archaeological site in Huaca Rajada in the Lambayeque Valley). The sumptuous burials of these individuals contained a wealth of exquisite textiles, hundreds of pieces of gold and silver jewelry and ornaments, and the bodies of several adults who were probably attendants for accompaniment into the underworld. 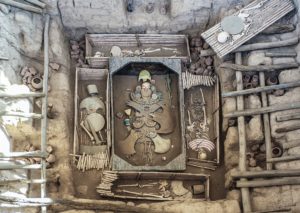 Reconstruction of the tomb of the Lord of Sipán in Huaca Rajada, Peru (Wikipedia)

When human diets changed as hunting and gathering shifted to domesticated plant production, the transition altered human evolution, as well as that of dogs. A surprising amount of information is available on ancient human diets, ranging from analyses of food left on hearths to the distinctive silica bodies (phytoliths) from plants that have been found embedded between human teeth in ancient burials.

Scientists have recently sequenced DNA from dog coprolites that were found at an archaeological site of an ancient farming community in northeast Italy. The fossilized feces revealed only a few copies of a gene that encodes the digestive protein amylase, used to breakdown starches in the gut, together with evidence of bacteria capable of producing high amounts of amylase. Many wolves today lack this gene, but most modern dogs have more of the gene. The simple explanation is that dogs were adjusting to a shift from mostly meat to more grain-rich meals, although the big picture of dog domestication undoubtedly has many complexities.

Fossilized animal excrement is an important resource. In the Scientific American news article that I read about dog digestion, a researcher stated “Usually in archaeology, human material is difficult to get a hold of…but no one is fighting over dog poop.” Sounds like coprolites are definitely an under-used resource with a bright future!

Today, we recognize an impressive 450 plus dog breeds globally. (Goldendoodles, Labradoodles, and other “designer dogs” are mixed-breed and not official breeds.) Dogs have the distinction of being the only large carnivore domesticated, and currently, they are the most abundant carnivore and the most variable mammal on earth. Most dog breeds today are the products of Victorian era breeding practices, with the majority dating back to the English Kennel Club in 1873, established to begin accurate tracing of pedigrees similar to the registries for horses.

Dogs have come a long, long way from their wolf origins! 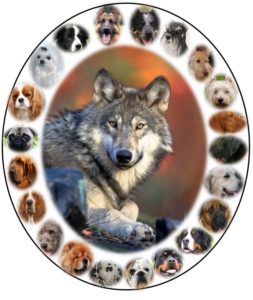 Photo of wolf tracks, 2002, by US Fish & Wildlife  https://commons.wikimedia.org/wiki/File:Canis_lupus_tracks.jpg

Photo of dog and wolf skulls; because of artificial selection, domestic dog skulls range from very short to very long, and these examples span the range, by Dmccamb, 2020   https://commons.wikimedia.org/wiki/File:Selected_skulls.jpg

Photo of reconstruction of the tomb of the Lord of Sipán in Huaca Rajada, Peru, 2014, by Bernard Gagnon  https://commons.wikimedia.org/w/index.php?search=lord+of+sipan&title=Special:MediaSearch&go=Go