Large earthquakes, volcanic eruptions, and tsunamis can create shock waves felt around the world–literally. The blast from the volcanic eruption on January 15, 2022, near Tonga caused spikes in air pressure recorded around the planet. People heard and recorded the sonic booms from the eruption as far away as Fairbanks, Alaska, around 6,000 miles (9,655 km) distant. The tsunami triggered by the eruption raced across the Pacific Ocean to cause death and destruction along the coastlines of the Americans, also about 6,000 or so miles distant. We can add this eruption in a remote part of the Pacific Ocean to our knowledge of pandemics, climate change, and numerous other interconnections that tie our planet and our societies together.

The Hunga Tonga Hunga Ha’apai eruption, named for the two small islands where it originated, created a large and extremely dramatic explosion, followed by lots of excitement. As the tsunami waves raced across the Pacific Ocean, tens of thousands of people were advised to evacuate from coastal areas.

From a historical perspective, volcano-generated tsunamis are rare compared to those generated by earthquakes. According to the director of the International Tsunami Information Center in Honolulu, Laura Kong, volcanoes generate only about 5% of tsunamis, with 87% from earthquakes. The remaining 8%? Large volumes of water can also be displaced by massive landslides, originating above or below ocean waters, glacial calving, and other underwater explosions. Our understanding of these phenomena isn’t as complete as we’d like it to be. And the immense amount of energy behind this sea level volcano–of which there are many more in the oceans–has prompted new concerns about effects when similar eruptions may occur in the future.

News sources have covered many aspects of the Hunga Tonga eruption, and spectacular videos of the eruption are available, but I’ve gathered some of the information that I think is especially interesting below. I’ve also written about tsunamis in my recent blog posts. One post, Great Earthquakes – From Distraction to Disaster, discusses how tsunamis form and their deadly power. The second, Exceptional Magnitude 9 Earthquakes, has details about the five extremely powerful magnitude 9 earthquakes that have been recorded in the past century – including the major tsunamis triggered by each of these earthquakes.

And –if you are interested in more information about the science behind some aspects of the Hunga Tonga eruption, check out a couple of excellent posts by Albert Zijlstra on the Volcano Café website here:  The Hunga Tonga Explosion  and  The VEI-5 Millennium Eruption of Hunga Tonga.

Hunga Tonga Hunga Ha’apai Island with superimposed coastline boundaries. Shown in yellow is the outline of the original island just after the end of volcanic construction in January 2015; the red outline is the coastline geometry as of early 2016. The development of accreted sandy isthmus regions to the northeast and west of the core of the new island is apparent (Garvin et al., 2017)

The eruption of Hunga Tonga wasn’t a surprise, as this volcano is located adjacent to a subduction zone in a region with frequent earthquakes and young volcanoes, markers of high tectonic activity. The volcano is part of the Tonga volcanic arc where the Pacific tectonic plate is subducting beneath the Australian plate. Molten material rising upwards in the crust is creating the volcanic arc, or string of volcanoes above the subducting oceanic plate.

Hunga Tonga has been erupting intermittently for more than a century, with the latest action beginning on December 20, 2021. The volcano is located on a large seamount, or submerged island about 6,500 feet (2,000 m) high above the ocean floor. The island has taken on various forms as eruptions altered the shape over time. When lava spews out into the ocean water in an eruption at sea level, the ocean waves quickly erode the new rock, and a plateau forms just below the water’s surface. After an eruption in 2015, rock filled the space between two small islands, which were each about 325 feet (100 m) above sea level. These islands were along one edge of what is the ring of a large caldera, now underwater, but outlined in black on the map below. 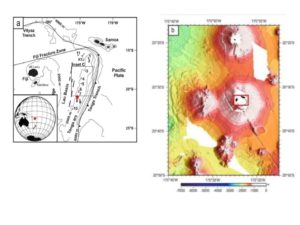 (a) Map representing the intra-oceanic Tonga arc in its regional tectonic setting and the location of the Hunga Tonga-Hunga Ha’apai volcano marked with a red star. (b) Bathymetry of the area showing the Hunga Ha’apai and Hunga Tonga islands (in the red box) at the rims of a preexisting caldera (black dashed line). (Colombier et al, 2018)

The enormous explosion on January 15 blasted volcanic ash and gas up to a height of close to 20 miles (30 km) (roughly three times higher than commercial aircraft fly). The fine ash particles propelled upwards at high speeds can hold electric charges, and so tens of thousands of lightning strikes were recorded all around the volcano (over 60,000 in 15 minutes at the peak–an amazing light show!) The explosiveness of the eruption is related to the interaction of magma with water and is known as a Surtseyan type, after the spectacular 1963-1964 eruption that formed Surtsey Island in Iceland

Information about the tsunami that is slowly coming in indicates it was extremely destructive locally, completely obliterating some small islands (hopefully uninhabited). Waves as high as 16 to 32 feet (5 to 10 m) have been reported. Fortunately, the waves were focused to the north and east, away from the populated areas of Tonga and Fiji, although the extent of the damage and fatalities are not yet available. As the tsunami traveled around the Pacific Ocean, waves as high as about 4 feet (1.2 m) were recorded at some locations. Waves swept away two women who died near the city of Lambayeque on the north coast of Peru and caused flooding and damaged boats in harbors up and down the coast of North America.

Some tsunami waves that rolled for thousands of miles across the Pacific Ocean were unusual. Instead of the usual gap of 20 to 60 minutes between large waves, as expected from tsunamis triggered by earthquakes, there was a notable sloshing observed at some locations, with only a few minutes between wave crests. Scientists are interpreting this as a result of air-pressure waves that radiated outward from the force of the powerful explosion. Another possibility is that super-heated magma mixing with seawater led to steam-blast eruptions that whipped up ocean waves. Whatever the cause, these waves likely exceeded the speed of sound, making them shock waves.

A similar air-pressure wave effect occurred in the 1883 explosion of Krakatoa, now in Indonesia, in what may have been the most violent volcanic event in recorded history. This eruption blew an island apart, and the massive pyroclastic flows that displaced sea water created tsunami waves estimated as high as an incredible 150 feet (46 m). The air-pressure waves from the eruption were recorded on multiple barometers around the globe, and they show waves traveled around the globe three and a half times. Unusually high waves in the Atlantic Ocean, including in the English Channel, are believed to have been caused by the air-pressure waves.

Sulfur dioxide is a potent volcanic gas that can cause global temperatures to cool. This happens when the sulfur reacts with water to form a layer of aerosol particles, creating a haze that scatters and absorbs sunlight, with a slight cooling effect on the planet’s surface. So far, scientists estimate that the amount of sulfur dioxide released by Hunga Tonga was low. Nonetheless, the fine particles of volcanic ash carried in the air will likely result in brightly colored sunsets in the southern hemisphere in coming months. 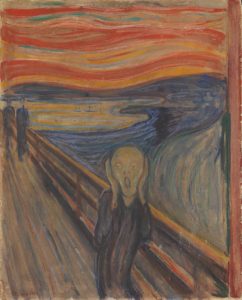 And now in an Art Note: the Krakatoa eruption may have been the source of inspiration for Edvard Munch’s painting The Scream. This eruption had colored skies in Munch’s homeland of Norway a decade before he made this painting. Munch described what led to his painting* as “I was walking along the road with two friends–the sun was setting–suddenly the sky turned blood red–I paused, feeling exhausted, and leaned on the fence–there was blood and tongues of fire above the blue-black fjord and the city–…. I stood there trembling with anxiety–and I sensed an infinite scream passing through nature.”

Many other explanations for this painting have been proposed, of course, but the effects of a major volcanic eruption causing an infinite scream in nature are fitting, too, IMO. We live on an amazing planet!

*E. Munch quote from “The Scream” page in Wikipedia