Watching a volcano erupt is exciting–and now people all around the world have opportunities to see these dramatic performances! The new volcano on the Reykjavik Peninsula in Iceland is getting lots of attention, as is Mount Etna in Sicily. Also, the eruption that began at Kilauea on December 20, 2020 is continuing and slowly filling the lava lake in the Halema’uma’u crater. The Global Volcanism Program of the Smithsonian reports that about 20 eruptions are occurring each day, and around 45 volcanoes have been active within the past few months. You can check details here: https://volcano.si.edu/gvp_currenteruptions.cfm . 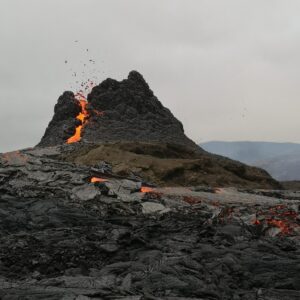 Over the past months, tens of thousands of small earthquakes on the Reykjavik Peninsula have shown that hot magma was moving slowly upwards towards the surface. On the evening of March 19, 2021, an eruption finally began. Located south of a peak named Mount Fagradalsfjall, this volcano is growing about 20 miles southwest of Reykjavik, the capital of Iceland, and 12 miles northwest of Iceland’s international airport. Lava is forming a small cone and pouring out into a valley; if that valley fills, the lava will flow into adjacent areas where it is unlikely to affect any infrastructure. So far it is a small eruption, as scientists expected, with lava pouring slowly out of only a few vents. Eruptions could continue intermittently for many years.

Scientists and other volcano enthusiasts around the world had been eagerly waiting for this eruption to begin, so there were celebrations when it finally started. Reportedly, there were also traffic jams of locals, witnesses to the earthquake shaking that had frequently disturbed even their sleep, and who now wanted to see the volcano at close range. The weekend starting time added to the festival atmosphere, and the ridges around the valley where the eruption is occurring form a natural amphitheater setting.

Here is the live feed webcam: https://www.ruv.is/frett/2021/03/20/live-feed-from-iceland-volcano These views can be quite spectacular, especially with the red glow of the hot lava during nighttime darkness. The fabulous photo of the cone and lava, above, is courtesy of Albert from his Volcano Café post here: https://www.volcanocafe.org/the-reykjanes-update/. Albert’s volcano updates are excellent, so you might want to check them out.

Iceland is in the region where the Eurasian and North American plates are separating along the Mid-Atlantic Ridge. This small country has over 30 active volcanoes, and a long and colorful history of volcanic activity. Memories of the 2010 eruption of the Eyjafjallajokull volcano in Iceland remain strong in the minds of many, not the least because it ejected so much ash into the air that flights across parts of Europe had to be grounded for weeks. Scientists don’t expect that to happen with the present eruption, although Nature often surprises us.

Residing on the Big Island of Hawaii in the southernmost part of the Hawaiian Island chain, Kilauea is possibly the most active volcano on earth. This volcano is currently erupting on the slope of another volcano: the enormous and also active Mauna Loa. Interestingly, Kilauea has a different plumbing system and lava chemical composition from those of Mauna Loa. The Hawaiian volcano chain has a fascinating history, and I’ve written about these islands in several blog posts (here: https://roseannechambers.com/hotspots-and-hawaiian-islands/ and https://roseannechambers.com/kilauea-stirring/ ).

Kilauea had an almost continuous eruptive sequence from 1983 to 2018. This ended when the ground surface at the volcano summit gradually collapsed over a few months into the space once filled by magma, deepening the summit crater by more than 1,600 feet. A quiet period ensued, ending on December 20, 2020, when an eerie orange glow appeared on the infrared monitoring cameras focused on the volcano summit. A new volcanic eruption was beginning. A lava lake inside the crater developed and is growing slowly, recently reaching a depth of about 732 feet. 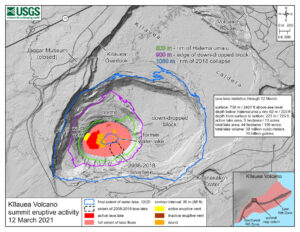 This map of Halema‘uma‘u at the summit of Kīlauea shows 20 m (66 ft) contour lines (dark gray) that mark locations of equal elevation above sea level (asl). The map shows that the lava lake has filled 221 m (725 ft) of the crater, to an elevation of 737 m (2418 ft) asl since the eruption began on December 20, 2020.  Lava is expected to be within view of the Kīlauea Overlook visitor area shortly before it rises to the level of the green contour line at 800 m (2625 ft) asl. USGS map.

The Hawaiian Volcano Observatory operated by the US Geological Survey provides great information on Kilauea here: https://www.usgs.gov/volcanoes/kilauea . The recent graphic, above, shows some interesting details.

Mount Etna is actively erupting on the east coast of Sicily, Italy. Located along the converging plate boundary between Africa and the Eurasian plate, Etna is a massive volcano that is the largest of three active volcanoes in Italy. Mount Vesuvius and Stromboli, the other two, have been active within the past century as well. Etna has documented historic eruptions dating back to 1500 BCE, and many times it has erupted explosively, resulting in thousands of human fatalities. Around 10,900 feet high, it towers above Sicily’s second largest city, Catania. 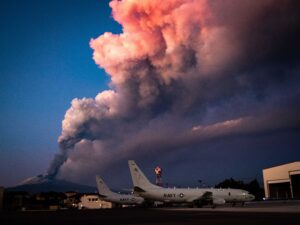 The Smithsonian Global Volcanism Program cites the current eruption as beginning in September 2013. The frequency and intensity of the eruption has varied since 2013, but includes periods with explosive eruptions, accompanied by lava fountaining high into the air from the summit craters, and ash plumes that have extended to several miles in height. Over one million people live within 20 miles of this erupting volcano–definitely frightening, IMO.

If you ever have the opportunity to get close to an active volcano, beware. There are many cautionary tales. In New Zealand, the Whakaari/White Island volcano had shown signs of unrest for several years, and then erupted unexpectedly on December 9, 2019. Sadly, 47 unlucky tourists were touring the private island when the eruption began; many received severe burns and 22 died. Volcanologists take lots of risks–and they tend to have shorter lifespans than other geologists.

The safest way to watch a volcano erupt? From a long distance, or via a webcam. Nature puts on a great show!

Please share this article — and if you like my posts, scroll down to the form on the bottom of this page and leave your email address on my website. You’ll receive messages only when I publish a new post (about once a week) and my occasional newsletter. Join now to learn more about geology, geography, culture, and history.

Photo (feature) of ʻaʻā flow front advancing over pāhoehoe on the coastal plain of Kilauea in Hawaii. https://en.wikipedia.org/wiki/Lava#/media/File:Aa_large.jpg

Photo of cone and erupting lava at Fagradalsfjall, Iceland. From https://www.volcanocafe.org/the-reykjanes-update/