Earthquakes and volcanoes can provide us with surprising and unexpected new data. Just within this century, several dramatic events have increased our understanding of these natural hazards. One of these was in December 2004, when the catastrophic Sumatra-Andaman earthquake in Indonesia demonstrated the incredibly deadly power of tsunamis. Following this magnitude 9.1 earthquake, tsunami wave heights up to 100 feet (30 m) overwhelmed coastal communities around the Indian Ocean; between the tsunamis and earthquake damage, there was a staggering number of fatalities, with about 230,000 perishing in 14 countries. 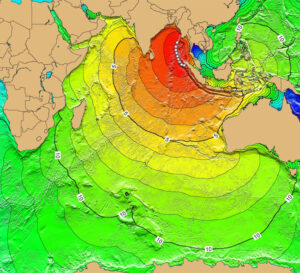 Another event was the 2011 Tohoku earthquake in Japan, a magnitude 9.1 earthquake that produced extremely high ground motions, including the highest ever recorded, and new data for engineers about soil behavior and liquefaction (loss of soil strength). Now, a volcanic eruption in 2021 has brought new information.

Waiting for Volcanoes to Blow

Typically, volcanic eruptions are preceded by days or weeks of changes in the earthquake activity of the region, as well as variations in gas emissions and in ground deformation, such as swellings or bulges as magma builds up beneath the surface. Magma levels in lava lakes at the tops of volcanoes can also vary shortly before an eruption. These are all important indicators of an impending eruption, allowing scientists to announce alerts, perhaps leading to evacuations. However, new data is showing that sometimes there can be less than one hour of warning before an eruption begins.

This story takes us to Africa, where active volcanoes line the East African Rift. Earthquakes and these volcanoes are gradually breaking the African continent apart along the rift; someday, an ocean will fill the gap where the crust is currently opening. Two volcanoes in this rift, Nyiragongo and Nyamuragira, are among the most active volcanoes on Earth. Nyiragongo directly threatens the densely populated city of Goma (>1 million inhabitants) in the Democratic Republic of Congo and the city of Gisenyi (~110,000 inhabitants) in Rwanda.

A lava lake that has persisted since at least 1928 crowns Nyiragongo, with roiling contents fed by molten magma welling up from below. In 1977, the crater wall broke open and the lava lake emptied in about 1 hour. Rolling down the flanks of the volcano, the lava reached speeds of up to about 37 miles/hour (60 km/hr), killing at least 600 people. A lava lake accumulated again in the crater. Fissures opened in 2002, and once again lava steamed down the steep flanks of the volcano. Approximately 400,000 people near the lava’s path were evacuated, but about 250 people died and 120,000 were left homeless. Following that eruption, the lava lake refilled once again. Waiting. Quietly. Finally, the weak rock confining this magma broke, and on May 21, 2002, with virtually no warning, another eruption began. 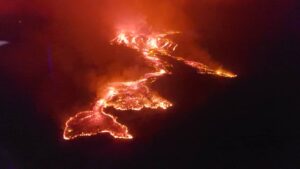 Before each of the 1977 and 2002 eruptions, a nearby M>5 earthquake was recorded in the rift valley, the lava lake at the top of Nyiragongo behaved strangely, and Nyamulagira volcano erupted, which has a plumbing system that is entwined with Nyiragongo. All of these were warning signs signaling that magma was moving towards the surface and about to erupt. These clear precursory signals were not present before the May 2021 eruption of Nyiragongo.

How can scientists predict an eruption—and warn people of an impending disaster—if there are no warning signs? This makes Nyiragongo–-and likely other volcanoes worldwide–-even more dangerous than previously thought.

The May 2021 eruption of Nyiragongo was located on the steep flank of the volcano, where magma broke through a weakened area of rock. Similar to the flank eruptions in 1977 and 2002, lava poured down toward Goma. The lava destroyed key electrical, water, telecommunication and other infrastructure, as well as eight schools, three health centers and many more structures, plus about 220 people died or were reported missing. (For more information about this eruption and future hazards see my blog post Volcanoes and East African Rift Roulette).

Scientists have methodically reviewed the relevant data that could indicate precursors to the May 2021 eruption. A sophisticated seismic array to track volcanic activity was deployed in 2015 in the Kivu rift region around Nyiragongo. Nine broadband telemetered seismic stations operated at the time of the eruption on May 22, 2021. In the days and hours leading up to the eruption, nothing unusual occurred.

Then, suddenly, anomalous seismic and acoustic signals were recorded – and within 40 minutes, the eruption began, and lava flowed towards Goma. The scientists who carefully searched for precursor information after the eruption noted: “Even for the best prepared volcano observatories, such a delay is extremely short, yet it would allow for some risk-reducing actions using appropriate monitoring infrastructure (for example, denser instrumentation of the edifice), early warning systems and robust emergency procedures, which were not available at Nyiragongo in May 2021.” (Smittarello et al., 2022) Sobering.

Can We Predict Earthquakes?

The short answer to the above question: NO. To date, there have been NO successful predictions of the time, location and magnitude of large earthquakes. And that is not for lack of trying. Numerous anomalous phenomenon are known that some believe could potentially could give effective warning of an impending earthquake. These include changes in animal behavior, radon gas emissions, electromagnetic anomalies, and many more – but none of these precursors have been reliably identified and used to predict an earthquake. Also, when observed, they may be attributed to other causes. Reports of alleged successful predictions are biased towards positive results, so the rate of false negatives – an earthquake without a precursory signal – is unclear, but high. Random chance plays a role. 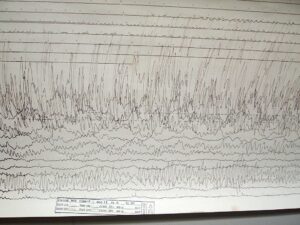 Seismogram of the 2011 Tohoku earthquake recorded at Weston Observatory in Massachusetts, USA (Wikipedia)

Additionally, there are negative consequences to posting a warning about an impending earthquake, from the costs of emergency measures to the economic disruption, and to public anxiety and panic in evacuations. False alarms undermine the credibility of possible future warnings. The numerous geologic complexities that control earthquakes may make it impossible to ever predict the occurrence of these events. Time will tell.

Hazards All Around Us

The world is an exciting place! We live on an active planet, and the natural world will continue to hold surprises. Stay tuned.

Photo of Nyiragongo eruption on May 22, 2021 by MONUSCO https://commons.wikimedia.org/wiki/File:The_Nyirangongo_volcano,_one_of_the_most_active_in_the_Great_Lakes_region,_erupted_on_Saturday,_May_22,_causing_the_displacement_of_populations_who_feared_for_their_safety_(51228861853).jpg

Seismogram of the 2011 Tohoku earthquake recorded at Weston Observatory in Massachusetts, USA https://commons.wikimedia.org/wiki/File:A_seismogram_of_2011_T%C5%8Dhoku_earthquake_and_tsunami.jpg