Did you know that in the time you are reading these words, at least 20 volcanoes are erupting on or close to continents around the Earth? Most of these volcanoes are in a band along the Pacific Rim of Fire, where tectonic plates are smashing together in subduction zones. I love maps, so when I found the excellent one showing recent volcanic eruptions below, I wanted to share it. The chains of volcanoes along the western edge of North America and South America, and in Japan and Indonesia, stand out clearly.

Since the Holocene epoch began about 11.6 thousand years, scientists believe that more than 1,400 volcanoes have erupted on or near continents.  In a striking contrast, hundreds of thousands of eruptions are taking place deep under the oceans. You can see this on the map above: these eruptions are occuring along linear spreading centers where tectonic plates are moving apart. Spreading centers are typically found in the middle of oceans, so they are known as midocean ridges. New oceanic crust (basalt rock) is being generated from magma bubbling up from deep in the mantle at these ridges, which can rise 8,000 feet or more above the ocean floor. Roughly 75% of all the lava that reaches the Earth’s surface is estimated to form along the midocean ridges*. 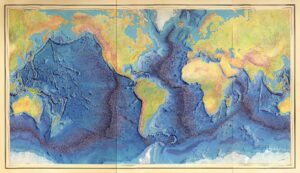 The spreading center below the Atlantic Ocean, called the Mid-Atlantic Ridge, is the longest of these ridges and the lengthiest mountain range on Earth. Extending an impressive 25,000 miles, this ridge separates the South American and African plates, and the North American and Eurasian plates. In central Iceland the ridge extends onto land, and active volcanoes are forming new rocks both on land and in ocean waters.

A new spreading center is gradually forming in eastern Africa along the East African Rift (clearly indicated on the first map). Numerous volcanoes, including Mount Kilimanjaro and Mount Kenya, are associated with the developing rift. The African plate is slowly breaking apart in this region, and 10 million years from now, give or take a few million, portions of Kenya, Uganda, and other east African countries will flood and become seafloor in a new ocean basin. We live on a fascinating planet! 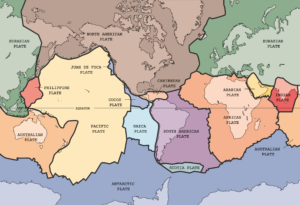 Painting of the Mid-Ocean Ridge with rift axis by Heinrich Berann based on the scientific profiles of Marie Tharp and Bruce Heezen (1977). ( https://www.loc.gov/item/2010586277/).

If you like my posts, please leave your email address on my website. You’ll receive messages only when I publish a new post (about once a week) and my biannual newsletter. Join now to stay up-to-date about culture, geography, and history — and to receive a special preview of my forthcoming book!