Achieving water security has been a challenge throughout human history, and now there are formidable mismatches between demand and supply on our planet. Currently, California and many western US states are edging closer to a continuation of drought conditions. Forecasts indicate another La Niña year for the winter of 2021-2022, which is expected to bring lower than normal rainfall to the Southwestern US. Drought conditions are affecting other states as well, including New England in the Northeast and parts of the Southeast. These regions have been experiencing moderate, short-term drought, and if these conditions persist, they will lead to significant drought.

Many of us take the availability of freshwater for granted, however, an astonishing two-thirds of the global population is projected to have difficulty accessing potable water by 2025. Also, surprising to me: 40 states in the USA will face water shortages by 2024. 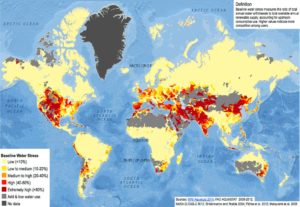 The increase in world population, changing food consumption patterns, improved living conditions–and especially, human-induced climate change that is creating a warming world–are forcing alternative approaches to reduce water scarcity. Energy and clean water production are correlated; with enough inexpensive power, we can reduce or even eliminate water shortages. Fortunately, the enormous power of the sun can be employed in energy production, and highly intelligent people are exploring many options to harness this energy to produce clean water. 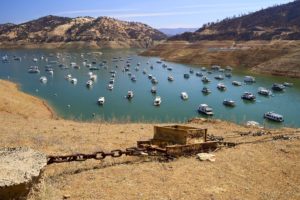 Lake Oroville in late May 2021, when water levels dropped to 38% of capacity. (Wikipedia)

The adverse effects of water scarcity have appeared repeatedly in my research on the rise and fall of ancient cultures in the Andes Mountains. In one notable case, two major cultures persisted for centuries in neighboring territories, but then apparently developed water disputes that led to their destabilization and ultimate collapse. About 1,400 years ago, the Tiwanaku and Wari cultures each established colonies in the Moquegua Valley, now in southern Peru, where irrigated agriculture provided an important source of food for their populations. In this valley, the water supply from rain and snow high in the mountains passed through Wari canals and fields before reaching Tiwanaku fields. Eventually, this situation appears to have become a source of conflict, and archaeologists believe it contributed to riots, destruction, and ultimately the downfall of both cultures in the valley. Within decades, both larger societies also disintegrated.

Today, there are many potentially volatile societal disputes arising as water scarcity looms ahead. I spent several months in fieldwork searching for active faults in Egypt in the mid-1980s, so I have been especially interested in following the controversy around the Grand Ethiopian Renaissance Dam on the upper stretches of the Nile River. Ethiopians aim to fill the massive reservoir behind the dam by 2023, creating the largest hydroelectric plant in Africa and generating power for Ethiopia and neighboring countries. A decrease in the amount of water available downstream from the dam is inevitable, and since the Nile currently provides over 90% of Egypt’s water supply, as well as affects the livelihood of millions of people in Sudan, many have significant concerns about water security. The dispute between the three countries has had ominous undertones at times, and there is currently a stalemate, as an agreement that could satisfy the interests of all three countries has yet to be found.

There are thousands of large-scale desalination plants in operation around the globe today. Several processing methods are used, but most rely on reverse osmosis, which forces seawater through a membrane that separates out the salt. This process requires copious amounts of electricity, typically supplied by fossil fuels. The method also leaves behind a super-salty soup, creating a disposal problem that can cause environmental damage when the operators inject brine underground or dump it back into the ocean. Also, typically only about half the seawater that is processed is desalinated, membranes eventually become clogged with salt, and the process can’t handle highly concentrated brines from groundwater and wastewater produced by industrial and agricultural uses. 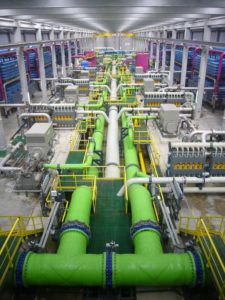 Purifying contaminated water by using the heat of the sun directly to evaporate water, and then condensing the vapor into clean water, has been used for thousands of years. This solar distillation technique can also efficiently desalinate brackish water and other wastewater with a high salt content. A large-scale plant with giant mirrors that will concentrate and super-heat water is currently planned in Saudi Arabia, but we also need simpler and cheaper systems that are more accessible worldwide.

Enter the US Department of Energy, which is now leading an ambitious program called the Water Security Grand Challenge. The goals are to advance technology that can help to meet the global need for safe, secure, and available water. Efforts are currently underway utilizing competitions and tens of millions of dollars in prizes to accelerate early-stage research, development, and deployment of new technologies. Transforming wastewater, ranging from sewage to oilfield waste, into water that people can use as an alternative source for agricultural and industrial operations, as well as simple and efficient potable water systems for domestic use, are part of the challenge. There are five goals to be reached by 2030:

Goal 2: Transform the energy sector’s produced water from a waste to a resource.

To help achieve the goals of the Water Security Grand Challenge, administrators have launched the Solar Desalinization Prize competition to encourage the development of lower-cost, simpler, and portable desalination systems that use solar-thermal power. Specifically, these systems are needed to provide clean drinking water in remote locations that are off the grid, or to be employed for emergency use, such as after a hurricane, earthquake, or other natural disaster. 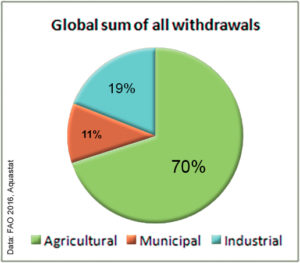 Global use of freshwater (Wikipedia)

A goal of the Solar Desalination Prize is a system that costs $1.50 and can produce 1,000 liters (264 gallons) of usable water. Engineers are experimenting with novel materials and processes. At Rice University, a team is testing a porous plastic membrane that lets water vapor through but not liquid, and that has one side coated with tiny carbon particles that heat up with the sun. At the Massachusetts Institute of Technology, researchers have developed a 10-stage system in plastic frames, with a black layer that evaporates salty water as it wicks up a paper towel and then reaches an aluminum film where the vapor condenses. The condensation releases heat, which aids evaporation into the next and subsequent paper towel layers. Other novel approaches are under development, and as researchers refine these into even more sophisticated methods, the new technologies could eventually lead to large-scale solar-thermal systems, besides complementing the reverse osmosis technique.

These are lofty goals to increase water security worldwide–and it is encouraging to know that people are working on them. It is also nice to know that taxpayer dollars to the US Department of Energy are going to good use.

We forget that the water cycle and the life cycle are one. (Jacques Yves Cousteau)

Photo of Lake Oroville, California in May 2021, by Frank Schulenburg. https://en.wikipedia.org/wiki/Droughts_in_California#/media/File:Boats_on_Lake_Oroville_during_the_2021_drought.jpg

Chart of global use of freshwater, United Nations Food and Agriculture data,2016, by Sampa. https://en.wikipedia.org/wiki/Water_scarcity#/media/File:GlobalWaterWithdrawals.jpg