The demand for lithium is increasing dramatically – and sources of this metal are being sought from the high elevations of the Andes Mountains to the lowlands of Australia. Battery packs for cell phones, laptops, and electric vehicles require lithium, as do batteries to store energy outputs from solar, wind, and other types of power generation. In efforts to curtail reliance on fossil fuels, more and more lithium will be needed as we move into the future. Many countries around the planet are searching for reliable supplies, either by identifying sources of this metal close to home, or by snapping up stakes in mines in the major lithium-producing regions of South America, and in countries from Australia to Zimbabwe. (More information about lithium batteries and domestic United States mines is in my post here: https://roseannechambers.com/leaning-forward-with-lithium/ )

Initially synthesized as a primordial element that can be traced back to the Big Bang and the beginning of the expanding universe, lithium is widely distributed on planet Earth. It is found in ocean water, many igneous rocks, and even plants and animals. Since concentrations of this metal are typically quite low, relatively few sources that are economical to mine have been found to date. The most productive are the salty brines found in salt flats and certain minerals in granitic rocks that formed extremely slowly. A third source, claystone associated with ancient lake deposits, is being recognized increasingly as a potential lithium ore. 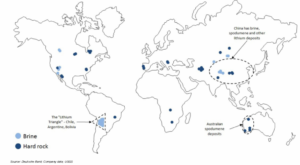 The “Lithium Triangle”, which spans the intersecting borders of Bolivia, Chile and Argentina, holds an estimated 50% of the world’s reserves. This lithium is found in vast salt flats, the remnants of ancient lakes that once covered much of this high plateau region in the Andes Mountains. These include the Salar de Uyuni, which extends across roughly 4,000 square miles and is considered the world’s largest salt flat. (It is approximately 100 times larger than the Bonneville Salt Flats in Utah, which have seemed enormous to me when driving across them on Highway 80.) Tens of thousands of years ago, water in the ancient lakes began to evaporate, leaving behind salt crusts and salty brine groundwater. Lithium is concentrated in these brines, which can be pumped out into solar evaporation ponds to remove excess water. When various chemicals are added to the brine, salts precipitate out and the valuable lithium can be extracted. 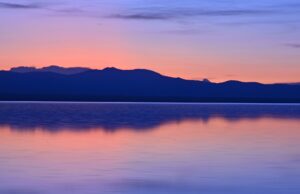 Similar salt flats are found in many regions around our planet. This includes Nevada, where the Silver Peak mine is currently the only operating lithium mine in the United States. In China, a major source of lithium is being mined from the hypersaline water of Lake Zabuye, located at an elevation of 14,400 feet in the Tibet region of southern China. Unfortunately, mines consume large amounts of water, typically a scarce resource in arid regions. In the Salar de Atacama in the Andes, brackish lagoons filled with brine shrimp are a major nesting habitat for flamingos, and lowering the water table to supply mines will impact the lagoons. In Nevada, watering holes for desert bighorn sheep and other wildlife may disappear. Local human populations also rely on this water, and watch the expansion of mining operations in the region with alarm. 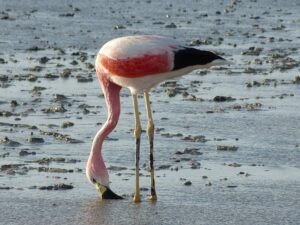 Lithium can also be successfully extracted from granitic rocks in hard-rock mining. Granitic rocks develop in regions that have been subjected to the volcanoes and earthquakes that are associated with converging tectonic plates. Pools of molten magma develop deep underground, and some of this magma eventually erupts in volcanoes, with the majority cooling slowly to form large bodies of granite known as batholiths. Over time, many of these batholiths are uplifted into rugged mountain ranges.

When pools of magma slowly cool, various minerals will form solid crystals that drop out of the liquid at different temperatures. Heavier minerals, such as manganese and iron, precipitate out earlier than lighter elements, such as silicon and lithium, which linger in the liquid and become concentrated. Eventually, if the cooling process is extremely slow, exceptionally large crystals develop, forming pegmatites. The coarse-grained pegmatites – typically with crystals 1 inch or more in diameter — can contain relatively high concentrations of rare minerals that would otherwise be widely dispersed in the rock. Among these are boron, fluorine, uranium – and lithium, which is frequently encompassed in the minerals spodumene and petalite (both are lithium aluminum silicates). These lithium-bearing minerals are the targets of hard-rock mining.

Elbaite tourmaline (olive-green) and lepidolite mica (violet), from a lithium-enriched pegmatite in Brazil.

Pegmatite crystals can be of enormous sizes. At the Etta Mine in the Black Hills of South Dakota, giant spodumene crystals were recovered, including many 30 feet long with diameters of 3 to 4 feet.  Possibly the largest spodumene crystal ever found was from the Etta Mine — a true giant that was reportedly 42 feet long and 5 feet 4 inches in maximum diameter.  This mine shut down in 1959 – and probably many more enormous crystals are hidden underground.

Mining hard and strong granitic rocks for lithium is expensive and the landscape is demolished in open-pit mines. Bulldozers and blasting are required to excavate the ore, and then the rock has to be crushed, treated with acid, and heated to obtain a commercially useful form of lithium. Nonetheless, granitic rocks are widely distributed around our planet, and many countries are focusing on domestic sources of granitic rocks in the rush to mine lithium. Pegmatites are being mined for lithium-bearing minerals in Australia, Zimbabwe, and in newly recognized areas in European countries, including in Austria and the Czech Republic.

Sedimentary rocks can also contain large amounts of lithium. This metal is highly soluble, so it travels around inside the thin outer layers of the Earth’s crust, sometimes interacting with clay. Efforts to track where lithium-rich fluid could be migrating and where it could become trapped have been assisted by the use of models developed for petroleum and groundwater circulation. Fault lines, among other geologic structures, can focus groundwater movements and allow development of valuable mineral concentrations.

The mining target at Thacker Pass, recently approved for construction in northern Nevada, is lithium-rich claystone from ancient lake deposits. These rocks are within the McDermitt Caldera, the site of a volcano that erupted around 16 million years ago.  After the eruption stopped and over time, water percolating through the volcanic rocks leached out lithium, which gradually accumulated in a large lake in the caldera basin. Eventually, the lake drained and exposed thick deposits of lithium-rich claystone. At Thacker Pass, open-pit mining and a leaching circuit that uses sulfuric acid and other chemicals is planned to extract the metal from the claystone and produce battery-grade lithium.

The volcano that formed McDermitt Caldera originated from the same source as the volcanic eruptions that have been occurring for the past 2 million years in the Yellowstone region.  A trail of volcanoes extends for at least 500 miles from Yellowstone southwestward into Nevada, with the ages of these volcanoes becoming increasingly older to the west. (A hotspot model for the Yellowstone volcanic system has been assumed for decades, although this is controversial; more about this and related topics in my blog post here: https://roseannechambers.com/yellowstones-dynamic-geologic-history/ ) Although I haven’t seen any specific information, I strongly suspect that a search for lithium is underway at other ancient lake sites in calderas. These are found in other volcanic regions in the Western US, and many could possibly be targets for mining.

Lithium-rich claystone has also been identified adjacent to the brine works of the Silver Peak mine in Clayton Valley, Nevada. In the Clayton Valley, Pure Energy Minerals has mineral claims on over 20,000 acres of land that surround the Silver Peak lithium brine mine, sited in an ancient dry lake bed. Exploratory drilling on the Pure Energy Mineral claims began shortly after the Nevada Division of Water Resources granted water rights to the project in January 2019. These water rights are considered sufficient for testing and to support a pilot plant facility. Many local residents in the region, as well as beyond, are viewing the next step of water demands, not to mention large-scale mining, with trepidation.

As outlined in my previous blog post about lithium, mining is messy. Open pit mines, and the many acres of evaporation pools required to concentrate brine, are clearly destructive for landscapes. Fortunately there are some mitigation measures available – more about those in a future blog post.

Photo of low light over the Salar de Uyuni in Bolivia by otsuka88 from Pixabay. https://pixabay.com/photos/bolivia-salar-de-uyuni-salt-lake-1802043

Photo of flamingo in Chile, Image by falco from Pixabay https://pixabay.com/photos/flamingo-chile-south-america-798591/

Photo of elbaite tourmaline (olive-green) and lepidolite mica (violet), from a lithium-enriched pegmatite in Brazil. https://en.wikipedia.org/wiki/Pegmatite#/media/File:Elba%C3%AFte_et_mica_(Br%C3%A9sil)_1.JPG