Where Mammoths and Mastodons Once Roamed

Where Mammoths and Mastodons Once Roamed

Ancient relatives of elephants–mammoths and mastodons—capture the imagination in a big way! From their heavy and muscular bodies to long trunks and curved tusks of ivory, humans have portrayed these creatures in artistic renderings from rock art thousands of years old to animated films like the “Ice Age” series. These extinct proboscideans appeared around 4 or 5 million years ago, and once roamed from Asia to Africa, and across Europe and North America. By around 10,000 years ago, almost all species of mammoths and mastodons had become extinct, likely from a combination of climate changes at the beginning of the Holocene and hunting pressure from humans.

Large populations of these giant animals once roamed the landscape, and their relatively young and well-preserved fossil remains are widely distributed. Frozen specimens are even found in Siberian permafrost, where the valuable ivory tusks are collected and sold. Notable traces of both mammoths and mastodons have been found practically in my central California neighborhood. In a blog post a couple of years ago, I wrote about one locality with evidence of mammoth activity; after visiting this site again recently, I was so intrigued by these impressive animals that I wanted to share more about them.

Mastodons (family Mammutidae, genus Mammut) and mammoths (family Elephantidae, genus Mammuthus) are distant relatives, with lineages that diverged many millions of years ago. A major difference between the two types of animals is the environments they inhabited. Mastodons were predominantly forest-dwelling creatures that browed on a diet of coarse leaves and branches of shrubs and trees. Mammoths were primarily grazers with a diet of herbs and grasses. The two types of animals have distinctly different teeth, as these evolved to suit their separate lifestyles. Mastodon teeth had pointy cones to efficiently breakup woody vegetation, and mammoth teeth were flat and more suitable for grinding grasses. 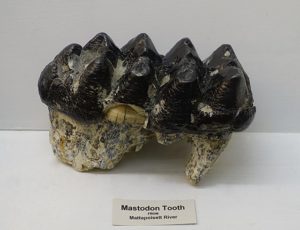 Mastodons had shorter legs, longer bodies, shorter and straighter tusks, and minimal body hair. Biologists believe their range was probably restricted to North and Central America. Mammoths evolved into a wide variety of species on many continents. Many were quite large, reaching to around 13 to 14 feet (4 m) at the shoulder and weighing as much as 12 tons, and they had long curved tusks. The wooly mammoth species from colder climates in North America and Eurasia had a heavy coat of hair. 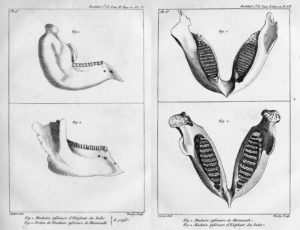 Fossil jaw of a wooly mammoth (bottom left and top right) and the jaw of an Indian elephant (top left and bottom right) from a paper published by George Cuvier in 1798–99.

Wooly mammoths were the last species of mammoths to emerge. They lived on Wrangel Island in the Arctic Ocean until as recently as about 4,000 years ago, where they probably survived only as long as they were isolated from human hunters.

Traces on the Sonoma Coast

Remarkable mammoth traces are found on a tall rock outcrop on the Sonoma Coast, north of San Francisco and Bodega Bay. Outcrops of resistant rocks known as sea stacks are common along this stretch of coast, both in the ocean water and in remnants on the wave-cut terraces now high above the crashing waves. The outcrop cluster near Goat Rock has a rough and lichen covered surface, but along the edges are many areas of highly polished rocks. We can find these polished surfaces where rock walls intersect and project outward or are overhanging, and on the leeward sides of the outcrop, away from the winds that blast onshore. The smoothed areas extend to heights of 14 feet (4.3 m) or so above the ground surface. How could these have formed? Mammoths. Mammoths rubbing their coarse fur against the rock. Impressive! 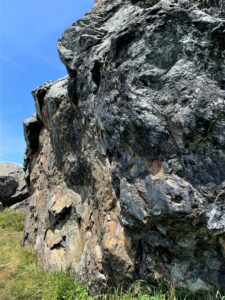 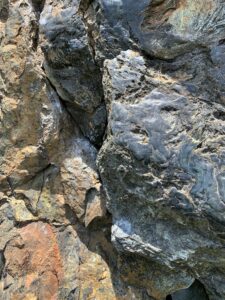 In a common grooming behavior, many large mammals like to rub themselves against rocks, trees and other solid objects to relieve itches and remove parasites. Giant mammoths roamed this ancient grassland when sea level was much lower and ocean waves were breaking onto beaches approximately 15 to 20 miles (15 to 32 km) to the west.

More information about these rocks, plus possible alternative explanations for the polished areas, and how scientists concluded mammoths have made them, are in my two previous blog posts. (The posts are here: Mammoth Findings on the Sonoma Coast – Part 1 and Part 2.) When I recently revisited this outcrop, I recognized many more small polished areas above my head than I had seen the first time I visited. Fascinating!

Fossils in the Sierra Nevada Foothills

While patrolling Mokelumne River watershed land in the Sierra Nevada foothills in July 2020, an employee of the local utility district (EBMUD) recognized petrified trees, remnants of an ancient forest. A fabulously rich 10-million-year-old fossil assemblage that is extremely valuable to scientists was subsequently discovered.

The utility has partnered with experts in paleontology and geology from California State University Chico to establish excavation sites over several miles in the region. These excavations have revealed hundreds of fossil specimens that represent more than a dozen ancient flora and fauna species. The fossils include bones and teeth from horse, camel, bird, tortoise, and rhinoceros–plus a complete mastodon skull with giant teeth and tusks. Also very impressive!

Mastodon and mammoth remains are widely spread around landscapes in the Northern Hemisphere. Depending on where you live, it might surprise you to learn that there are some nearby (check the web!). California has many examples, including at the La Brea tar pits amid densely developed downtown Los Angeles. The Wikipedia Mammutidae page states: “In 2009, a family in Portland, Michigan, unearthed mastodon bones while excavating a new pond on their property. It is one of around 250 mastodons found in Michigan over the past century”.

So, watch for unusual natural objects when you are out walking, as you just might stumble across an important fossil. There is so much more out there to be discovered. We live on an amazing planet!

Illustration with a comparison of a wooly mammoth (left) and an American mastodon (right) by Dantheman9758, 2007.  https://en.wikipedia.org/wiki/Mammoth#/media/File:MammothVsMastodon.jpg

Figure of the fossil jaw of a wooly mammoth (bottom left and top right) and the jaw of an Indian elephant (top left and bottom right) from a paper published by George Cuvier in 1798–99.  https://en.wikipedia.org/wiki/Woolly_mammoth#/media/File:Cuvier_elephant_jaw.jpg

My photos of Sunset outcrop near Goat Rock, Sonoma County, 2019