The dramatic landscape of Yellowstone National Park, including exploding geysers, bubbling mud volcanoes, and rainbow-colored lakes, all provide hints of the dynamic geologic history of the region. Yellowstone is one of the Earth’s largest volcanic systems, and earthquakes, ground surface movements, and hydrothermal activity in the region are all indications of this volcanism.

Yellowstone’s origin is widely considered a classic example of a hotspot, with volcanic activity generated by a plume of hot and buoyant material rising from deep within the mantle. This is a simple and elegant explanation – but it is probably not accurate. In recent developments, geophysical techniques that provide windows deep into the Earth are revealing views that are different from what was once assumed. 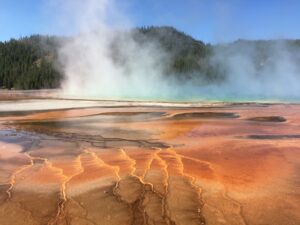 There have been three exceedingly large volcanic eruptions in the Yellowstone region in the past 2.1 million years. The first of these events was one of the five largest individual volcanic eruptions known on Earth, forming a caldera more than 60 miles across. (Calderas are giant depressions that develop when a massive volume of material is erupted in a volcano, and the ground surface loses structural stability and then collapses into the empty space.) A second smaller, but still huge, eruption occurred about 1.3 million years ago (Ma) and a third giant eruption was a mere 630,000 years ago.

Each of these three (plus at least two older eruptions at 4.5 Ma and 6.0 Ma) are considered “super-volcanoes” and ranked at Level 8, the highest level of the “Volcanic Explosivity Index” used to compare volcanoes. This scale is logarithmic, similar to that used for earthquake magnitudes, so that each successive interval on the scale represents a tenfold increase in explosive power. Vibrant descriptive terms are used in this scale, including “Cataclysmic” for Level 4, “Paroxysmic” for Level 5, and for the highest, Level 8, “Mega-colossal”. (Yikes! Best to only read about such astonishing events.)

The Yellowstone eruptions of the past few million years are part of a pattern of volcanism that has extends along the Snake River Plain. Eruptions of decreasing age are found from west to east, consistent with the westward drift of the North American continent and the eastward movement of subducted oceanic tectonic plates beneath the mid-continent. 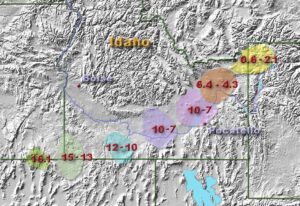 Volcanic eruptions in the Snake River Plain and Yellowstone region, ages in millions of years

The relative sizes of explosive eruptions are compared by calculating the volume of volcanic ash (glass shards) and rock distributed across the landscape and then estimating the amount of molten material that was erupted. For perspective, scientists believe that the volume of magma involved in the 2.1 Ma Yellowstone eruption was nearly 6,000 times greater than the volume released during the 1980 eruption of Mount St Helens in Washington. The two Yellowstone eruptions at 2.1 Ma and 0.63 Ma were the largest in North America in the last few million years; the third largest is the 0.76 Ma Long Valley eruption in California that created the Bishop ash, and the Yellowstone eruption at 1.3 Ma is the fourth largest. (My recent post, Earthquakes and Eruptions in Eastern California, has a description of the Long Valley volcanoes [ see https://roseannechambers.com/earthquakes-and-eruptions-in-eastern-california/ ].) 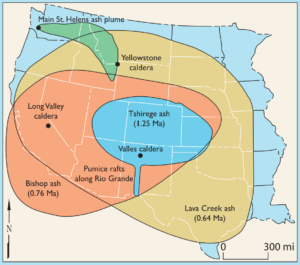 A future “super-volcano” erupting at Yellowstone appears to be highly unlikely as the geologic setting of North America has changed. Nonetheless, volcanic activity continues and relatively “minor” steam eruptions and lava flows are possible anytime. This makes the region an exciting place for anyone interested in the formation of the spectacular landscape.

Lava and Geysers and Earthquakes – oh my!

There have been approximately 30 eruptions of lava flows in the Yellowstone region since the last caldera-forming eruption, with the most recent erupted about 70,000 years ago. These events are far less devastating than explosive eruptions, as the lava oozes slowly over the surface, but the molten material destroys everything in its path (similar to the recent eruptions from Kilauea in Hawaii, where houses, park roads and other structures became toast).

Steam explosions are common in Yellowstone, and occasionally violent. Dozens of these over the past few thousands of years have hurtled water and rock fragments for as much as several thousand feet. One such hydrothermal explosion about 13,800 years left a crater that is 3 miles in diameter; a series of these in the 1880 and 1890s sent large rocks flying as far as 50 feet. The magma reservoir beneath the region has temperatures that exceed 1,400 degrees F, which heats the surrounding rocks and the groundwater. Since the boiling point of water increases with pressure, and pressure increases with depth, deep water can be much hotter than the boiling water near the surface. If confining pressure is released quickly, an explosion occurs and converts the water to steam. This is the process that drives the activity of the many active geysers in Yellowstone, including Old Faithful.

Earthquakes can destabilize the hydrothermal system in Yellowstone. Changes can occur in the water pressure in the conduits feeding the geysers, with some ceasing to erupt and others newly forming or returning to life after dormancy. Increases in the temperature of the geysers, explosive steam eruptions, and other changes have also been correlated with earthquakes. Ground movements, including swelling or doming upwards over tens of square miles, are correlated with earthquakes and the rising of magma and hydrothermal fluids into the subsurface reservoirs. 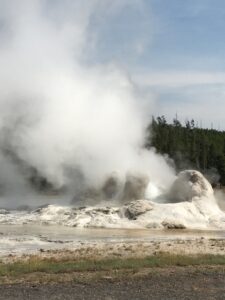 Thousands of earthquakes are occurring in the region each year as a result of the tectonic setting. Most of these earthquakes are too small to be noticeable, but there have been at least six of magnitude 6 or higher within the past few hundred years. Some, including the 1959 Hebgen Lake earthquake of magnitude 7.2 that occurred just outside the northwestern boundary of the park, are related to crustal stretching that is building mountains in the Basin and Range geographic province. (My recent post Earthquakes and Other Surprises in the Basin and Range, has a description of this province [ see https://roseannechambers.com/earthquakes-and-surprises-in-the-basin-and-range/])

Distant earthquakes can affect the Yellowstone region. This was first recognized in 1992 when the magnitude 7.3 Landers earthquake in southern California trigged a swarm of earthquakes at Yellowstone, some 800 miles away. The magnitude 7.9 earthquake on the Denali fault in November 2002, almost 2,000 miles to the north in central Alaska, triggered hundreds of small earthquakes in Yellowstone. Geyser activity was altered for several months afterwards.

For decades, the source of the Yellowstone volcanic system has been assumed to be a hotspot, similar to the ones underlying the volcanoes of the Hawaiian Islands and Iceland. (My recent post “Hotspots and Hawaiian Islands” describes hotspots [see https://roseannechambers.com/hotspots-and-hawaiian-islands/].) Since a wide assortment of geologic and geochemical data cannot be adequately explained by this model, however, the hotspot hypothesis has been debated for many years. Developing a model that accommodates the range of available data remains a challenge.

Geophysical imaging techniques indicate that far below the Yellowstone region, there are remnants of the Farallon plate, a tectonic plate of oceanic crust that began to disappear beneath the west coast of the North American continent from subduction tens of millions of years ago. This presents an important challenge to the deep mantle plume model because the thick slab should effectively block the upward movement of a deep-rooted plume. Some interpretations of geophysical data suggest either that a deep plume structure is absent, or alternatively, that a plume is slipping through gaps in the fragmented slab. In other models, researchers propose that deep mantle material is upwelling around the tip or edges of the sinking slab, creating the Snake River Plain and Yellowstone volcanism. Mantle dynamics are complex and not clearly understood, so much more work is needed before a clearer picture can emerge.

Future Hazards – and a Good Story

Hazards from future Yellowstone volcanic activity are outlined in a USGS graphic, below. Despite the tidy picture presented, there are extremely high uncertainties in predicting volcanic events and earthquakes, at least in part because recurrence intervals of these phenomena are irregular. 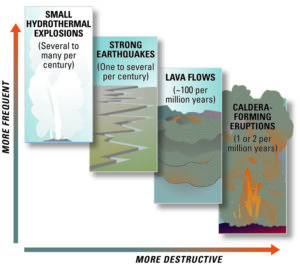 Frequency of events at Yellowstone (USGS)

The probability of a super-volcano erupting in the near future is extremely low. Nonetheless, such a mega-colossal event is still possible, so a few years back, inquiring minds at NASA began to consider the consequences (all bad) of a major new eruption at Yellowstone. The researchers concluded that the gigantic Yellowstone heat generator could be cooled by dousing it with water, thus potentially short-circuiting a future major eruption. They hatched a plan for circulating water deep underground, and then for bonus points/dollars, proposed including a geothermal plant to generate electricity at extremely competitive prices. The cost of this project was even estimated: around $3.5 billion. An internal NASA report was prepared, but never released. (An interview with a scientist who was involved in the deliberations was the subject of a 2017 news release by the BBC [Cox, 2017].)

Such a grand humans-attempting-to subdue-nature plan! (Sometimes the truth is stranger than fiction.) As you’ve probably already predicted: drilling into an active volcanic system would carry extremely high risks – like, triggering a massive eruption and/or release of volatile gases that could devastate humanity. This is not going to happen. Still, it’s a fascinating story! 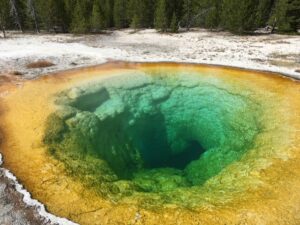 Cox, David, 2017, . “Nasa’s ambitious plan to save Earth from a supervolcano; August 17 https://www.bbc.com/future/article/20170817-nasas-ambitious-plan-to-save-earth-from-a-supervolcano

Map showing eruptions in the Snake River Plain and Yellowstone during the past 16 million years; https://en.wikipedia.org/wiki/Yellowstone_Caldera#/media/File:HotspotsSRP_update2013.JPG

Graphic representing frequency of events that occur at Yellowstone by USGS; https://www.usgs.gov/media/images/graphic-representing-freq-events-occur-yellowstone