I’m a fan of Jared Diamond’s classic Guns, Germs and Steel: The Fates of Human Societies published back in 1997. Recently, I’ve discovered another two interesting “Big History” books. Origins:How Earth’s History Shaped Human History (2019) by Lewis Dartnell begins with human evolution in East Africa and ends with the profound ways the planet has been altered in just the past few centuries. Peter Watson, in The Great Divide: Nature and Human Nature in the Old World and the New (2012) examines the remarkably different trajectories taken by human societies in the Old World and the New World between 15,000 BCE and 1,500 CE. 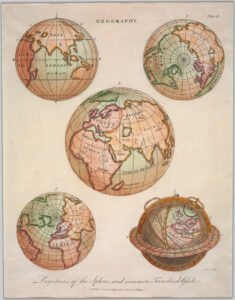 In Origins, Dartnell covers climatic changes, colliding tectonic plates, distribution of wild species of plants and animals, different types of rocks, ocean currents and wind patterns, and on and on. These phenomena helped to shape the dispersal of humans out of Africa, locations of the earliest civilizations near tectonic plate boundaries, routes along the Silk Road across Eurasia, mining of coal and oil supplies that dominate geopolitical tensions today, and even why Democratic-voting counties exist in a distinct band across the southeastern US (Cretaceous marine shales that produce fertile soils, especially valuable for cultivating cotton).

The descriptions of how European sailors explored the seas are fascinating. Starting as early as the late 14th century, Spanish and Portuguese sailors were venturing south along the northwestern coast of Africa. Return trips were difficult. Eventually the navigators learned that by turning west into the vast Atlantic Ocean and heading north to above 30 degrees latitude, they could catch southwesterly prevailing winds and sail back home. Over time, sailors gained the knowledge that prevailing winds blow in opposite directions in adjacent bands of latitude. Christopher Columbus believed that by sailing west he could reach the East Indies, which he expected was just over the horizon. Wrong. (His posssible map, below.) Instead, in his 1492 expedition he visited what are now the Bahamas, Cuba, and Hispaniola (Dominican Republic/Haiti)—then sailed northeast and managed to catch the westerly winds that returned him to Spain. Amazing! 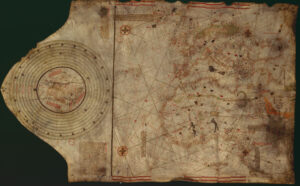 The two great populations that developed in the Old World and the New World — Africa, Asia and Europe on one side and the Americas on the other — were completely separated until the small wooden ships carrying Spanish fortune seekers sailed across the Atlantic Ocean. The Great Divide has descriptions of how the societies in these realms developed very differently, with dissimilar beliefs and religious practices, all as a result of adaptations to environments with different climates, plants, animals, and other natural resources.

The Great Divide is a tome, and I haven’t finished reading it yet, but Watson covers lots of great material. Did you know — three things that didn’t happen in the New World: plowing, milking and riding (fragile llamas and alpacas were the only large mammals domesticated in the Americas). Pastoral nomadism dominated in the Old World (lots of domesticated mammals) and fertility was a foundation of religions. The unpredictable environment of much of Mesoamerica and the Andes – including El Niño floods, violent earthquakes, and exploding volcanoes –inspired dramatic religions that included human sacrifice (emphasis on convincing deities to make things NOT happen). The New World ruled with vast numbers of hallucinogens (as many as 100 different types; the Old World only had opium poppies, Cannabis, and a handful of others) but in the Old World alcohol was discovered very early. And much much more – fascinating info!

Have you read any of these three books or similar titles that you’ve enjoyed? I’d love to hear from you — please add your comments in the “Comment” box, below. Thank you!