Earthquakes and volcanoes are frequent occurrences along the Pacific coast of the Americas, from Alaska to Patagonia. When I first visited the Andes Mountains in Peru, the evidence of this tectonic activity in the landscape was captivating. Also notable: the archaeological sites with monumental adobe and stone block structures, built by the ancient Andeans hundreds and even thousands of years ago, and still standing today. Clearly, the ancient builders planned to have their important structures last–-and they had the knowledge to build appropriately for their environment.

In earthquake-prone regions like the Peruvian Andes, landslides, avalanches and tsunamis often accompany earthquakes. And earthquake shaking can be devastating. Many human-built structures don’t hold up well in severe shaking, especially when it lasts for several minutes. Historically, large swaths of cities have essentially been leveled. So, it is interesting that structures built by the Andeans have remained intact for centuries. Turns out the ancient builders were more sophisticated than many realize. Learning how ancient experience-based technologies compare with current technologies fascinates me.

One example that amazes many is an expertly built curved stone wall built by the Incas as part of the Coricancha, their sacred ceremonial complex that visitors can see today in Cusco, Peru. The blocks that form the wall are smooth, uniform, and fit tightly together. Inca builders are renowned for their stonework, and the workmanship in the curved stone wall is exquisite, probably the most superb ever constructed at the height of this formidable empire. The wall has stood solidly for over 500 years. 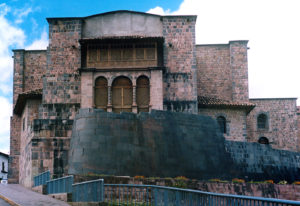 Late in the sixteenth century, the Spanish Dominicans chose the Coricancha site for the construction of their Church of Santo Domingo. They ordered the destruction of much of the curved wall, except for a single large section preserved to form the foundation for a wall of the church. When a powerful earthquake shook Cusco in 1650, it reduced the Church and many other Spanish Colonial structures in the city to rubble. The curved Inca wall remained unscathed. Eventually, the Church of Santo Domingo was rebuilt, again anchored to the curved Inca wall. Another strong earthquake shook Cusco in 1950. More than half of the buildings in the city collapsed, including the Church–but not the ancient curved wall. Later, the Church of Santo Domingo was restored for yet a third time using the sound foundation of the Inca wall. The ancient designers of this  curved wall intended for it to last—and they were successful.

Perhaps the ghosts of Inca builders laughed at the construction blunders made in their homelands by the ignorant European newcomers who had invaded so brashly?

What are some of the design details that can help to make a structure resistant to severe earthquake shaking? Building codes today strive to limit potential damage to socio-economically acceptable levels. These levels vary for the type of building, as high occupancy or critical facilities such as hospitals, schools, fire stations, and others need to be engineered to avoid collapsing and some need to continue functioning following a major earthquake. To assess earthquake resistance, researchers frequently use experimental evaluations. These include building small-scale models of a structure, putting it on a shake-table, and then shaking the structure to see what damage occurs. Engineers also use computational approaches that involve modeling the behavior of columns, shear walls, and other structural components.

There are several ways that modern engineers can mitigate the adverse effects of seismic shaking, or vibration. One important method is to suppress the amount of energy flowing from the ground into a structure by decoupling it from the substructure that is resting on the ground. We know this approach as base isolation. An analogy is that a building can be like an ice cube on a plate—even when the plate moves, the ice cube stays relatively stable.

Engineers incorporate the technology into new structural designs, but most importantly, it can become a part of seismic retrofitting. Prominent buildings—including the San Francisco City Hall, Los Angeles City Hall, and Salt Lake City and County Building—all have had base isolation systems added to foundations to protect them against future severe earthquake shaking. Thousands of other buildings in earthquake-prone regions around the globe also use this technology. 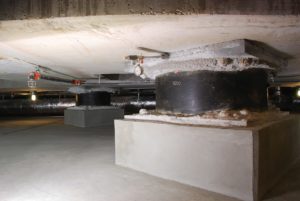 Why do the fine stone walls of the Incas, such as the curved wall of the Coricancha or buildings in the citadel of Machu Picchu, survive repeated earthquakes for hundreds of years? It turns out that the dry-stone masonry techniques the ancient Andeans used for their finest constructions are highly earthquake resistant. The builders carefully cut and trimmed stone blocks to fit together tightly without mortar. During earthquakes, the blocks can move slightly, effectively dissipating the earthquake wave energy, but then resettle into the original positions.

Other characteristics of ancient Andean construction also contribute to earthquake resistance. Builders used strong igneous rock for many of their monumental structures, such as granite at Machu Picchu and andesite in the curved Coricancha wall. Thick walls, together with the dense stone, makes these structures heavy and quite strong. Andean traditions of inclining thick walls inward a few degrees (called batter) also contribute to earthquake resistance. 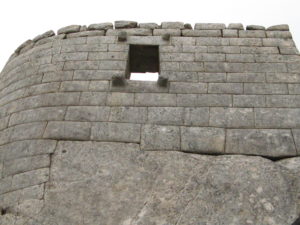 The Incas were master builders, but long before this culture arrived on the scene, other ancient Andean societies used a unique method to limit earthquake vibrations.

Around 5,000 years ago, ancient Andeans on the coast of modern Peru used shicra bags in the foundations of their monumental step pyramids. They filled these mesh bags, woven from plant fibers, with river cobbles and piled them behind retaining walls and into the bases of the terraces of their temples. The standardized weights of the shicra bags found at one site (El Paraíso) ranged from about 50 to 60 lbs (23 to 28 kg)—which is a weight that one or two workers could carry. Archaeologists at this site also found that the rock fill needed to be piled into the fiber bag and then the final weaving completed to close up the bag while it was still in place. Seems like a lot of extra work to bag rocks, but the Andeans knew what they were doing.

A group of engineers in Japan recently examined the role these shicra foundations played by investigating their earthquake response properties. Using replicas of the rock filled shicra bags as the substructure and large steel plates to represent the pyramid mound, shaking table experiments produced accelerations that revealed the stability of the shicra foundations. Researchers found that, effectively, the shicra bags with river cobbles displayed behavior similar to the base isolation technology used in important buildings today. Amazing! When—and how—did the ancient Andeans discover this method of strengthening their ceremonial structures? We will probably never know, but I think the 5,000 year examples of the base isolation method are impressive. 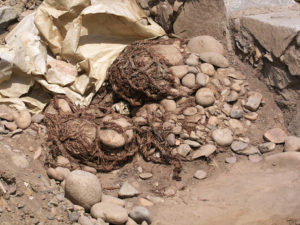 A New Building That Should Age Well

The earthquakes and volcanoes that ancient Andeans had to contend with continue to threaten vast regions today. Plus, modern times have brought additional hazards. A few years ago in Salem, Oregon, a group of employees at the Oregon State Treasury considered the variety of disasters that could befall a government building. Besides volcanic eruptions and strong earthquakes, potential calamities include floods, wildfires with choking smoke, and power outages. Since employees in the Treasury building prepare the paychecks for many government and civic employees, and they process Medicare payments, state pensions, unemployment checks, and other services, they are essential workers. Their old building had serious limitations, among them: it would probably collapse in a large earthquake. Now, a new Oregon State Treasury building is in use, and this structure will allow employees to continue to work during and after a disaster.

The newly constructed two-story building sits on a base isolation system that reportedly can reduce earthquake shaking by as much as 75 percent. The building is highly energy efficient, with substantial insulation, banks of solar panels, and plenty of natural light—the lighting system uses just half the energy of a typical building. There are sophisticated ventilation systems, backup water and sewage systems and a backup diesel generator. The building cost about $32 million for 35,805 square feet of office space—about twice the cost of a conventional office building of the same size. And there are significant benefits.

Will the Oregon State Treasury building be serviceable for hundreds of years? Maybe! Whatever happens in the coming decades, it is a building for modern times.

Fuller, Thomas, “Built to Outlast the Big One, and Pretty Much Anything Else”, The New York Times, April 13, 2022.

Photo of pyramid at Caral, built circa 5,000 years ago, by Javier Fernandez (javi270270), 2007. https://commons.wikimedia.org/wiki/File:Piramide_de_Caral.jpg

Photo of seismic dampening base isolators under the Utah State Capitol building, by Mike Renlund, 2008. https://en.wikipedia.org/wiki/Seismic_base_isolation#/media/File:Base_isolators_under_the_Utah_State_Capitol.jpg