Chiles and Chocolate – Exchanges and Extinctions

Chiles and Chocolate – Exchanges and Extinctions

What would Italian food be without tomatoes or Indian food without chiles? Both plants were first cultivated and used for thousands of years in the Americas before being transported across the world to join the cultures where they are appreciated today. Another important meeting: sugarcane from Asia and cacao, or cocoa, from Central America — without that merging, the chocolate confections we love wouldn’t be nearly as delicious. Plant and animal exchanges have shaped our societies and our environments. My fascination with the history of these exchanges is based on my interest in natural history, as well as (ahem) my enthusiasm for food.

Migrations have been taking place ever since complex life forms began crawling on the surface of the Earth some 600 million years ago. In just the past few million years, two major migrations and exchanges that have taken place are especially notable. The most recent one began when the first Spanish conquistadors reached the Americas in the 15th century, known as the Columbian Exchange. The earlier one started around 2.7 million years ago when migrations of plants and animals between the North and South American continents began. Known as the Great American Interchange, these migrations set the scene for the indigenous societies that eventually developed. 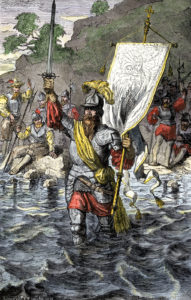 Vasco de Balboa and Spanish conquistadors claiming the Pacific Ocean for Spain in 1513 (an imaginative work by F.E. Wright, 1897)

Migrations Between the Old World and New World

After the earliest explorers traveled to the Americas from Siberia many thousands of years ago, there was minimal contact between the Old World and the New World for millennia. Societies in the Americas developed completely independently until three small wooden ships carrying Spanish fortune seekers sailed across the Atlantic Ocean. In 1492, Christopher Columbus and his crew reached the Americas, and the Columbian Exchange began. European ships traveling between the Old World and the New World moved plants, animals, diseases, technology, and ideas between continents. This brought dramatic — and frequently tragic — changes that transformed societies and environments worldwide.

The Columbian Exchange began in the Caribbean islands that the Spanish conquistadores reached first, including what are now Cuba, Jamaica, and Hispaniola (Dominican Republic and Haiti). Over the next decades, Spanish ships reached regions that are now in Mexico, Columbia, Ecuador, Peru and other South American countries, and the exchanges continued. Produce from the Americas was carried by ship back to Europe, including maize, chocolate, chiles, tomatoes, avocados, and potatoes. In turn, the arriving Spanish settlers brought their familiar foods to the Americas, such as wheat, rice, sugar, and livestock of sheep, pigs, and cattle. These transfers between the New World and the Old took place within just a few centuries–a rapid pace that was unprecedented in world history.

A few million years earlier in the Americas, a major exchange of animals and plants occurred when the North American and South American continents were joined by the Isthmus of Panama. Over many thousands of years, this interchange significantly modified the flora and fauna of both continents. From North America, animals that traveled into South America included the ancestors of camels, deer, horses, tapirs, bears, cougars, jaguars and saber-toothed cats. The animals that traveled north from South America to North America included ground sloths, porcupines, opossums, terror birds (large carnivorous flightless birds), capybaras (giant rodents), and glyptodonts (tortoise-shaped mammals about the size and weight of a Volkswagen bug). 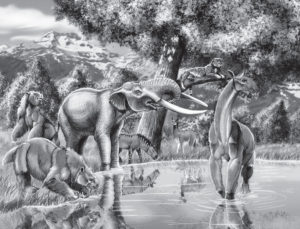 Although researchers have found evidence that the initial net migration was symmetrical between the two continents, over time the northward migrating animals were not able to compete as successfully for resources. One reason was the cooler and drier climate in the north, to which animals that had evolved in warm tropical conditions could not easily adjust. Another reason was that the North American species had evolved to fill ecological niches in a more competitive environment and were better suited to compete with the newcomers. Southward migrating species were more successful and managed to reproduce in larger numbers, which also helped them to achieve greater diversity. Paleontologists believe the new South American residents caused the extinction of many of the long-established South American species, while there is no clear evidence that South American migrants caused extinctions in North America. 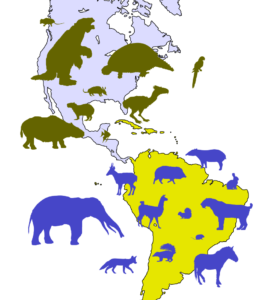 Widespread extinctions of megafauna at the end of the Pleistocene, around 12,000 years ago, and into the early Holocene, occurred on many continents worldwide. (Megafauna is a term commonly used for animals that are larger than humans.) Large mammals were affected the most severely, followed by large birds and reptiles; most marine creatures were unaffected.

The South American continent had a very high extinction rate, with over 80 percent of the large-bodied animals lost. Only deer and the wooly coated camelids, the guanaco and the vicuña, survived to become the largest mammals that are native to South America–with the camelids to eventually become the ancestors of llamas and alpacas. On the North American continent, researchers have found that the extinction rate was about 70 percent. On both continents, entire groups of large mammals, including mastodons, mammoths, and horses, disappeared. The reasons for this dramatic rate of extinction are widely debated. Over-hunting by expanding populations of humans is likely a major contributor, along with changes in the climate and associated habitat loss.

In the modern world, of course, human-caused mass extinctions are underway. Many animal species are being eliminated, from tiny frogs and birds to enormous white rhinos. Scientists estimate that the current rate of global species extinctions is 100 to as much as 1000 times the average extinction rates, or the “background” rate, in the evolutionary time scale of our planet. We have reportedly lost an incredible number of at least 570 species since 1750. The destruction of natural habitats resulting from overpopulation and overconsumption by humans is the primary cause of these extinctions. And the future looks grim: by the year 2100, some scientists estimate that up to half of all presently existing plant and animal species may become extinct.

If different continents had been connected together millions of years ago, what would have changed in human history? What if the ancient Andeans hadn’t had camelids to domesticate into llamas and alpacas, or if people hadn’t domesticated sheep, goats, and cattle in the Middle East? What if koalas and kangaroos roamed California? Most of all–why don’t societies today work harder, or more effectively, to slow the rate of extinctions and the destruction of our planet?

If you liked this post, please share it and/or leave a comment below – thanks! And if you’d like to recieve a message when I publish a new post, scroll down to the bottom of this page and leave your email address on my website. Join now to learn more about geology, geography, culture, and history.

All data in this post from various Wikipedia pages.

Painting of Vasco de Balboa and Spanish conquistadors claiming the Pacific Ocean for Spain in 1513 (an imaginative work by F.E. Wright, 1897)  https://commons.wikimedia.org/wiki/File:Vasco_-N%C3%BA%C3%B1ez_de_Balboa.jpg