Curious Concretions on the Colorado Plateau

Curious Concretions on the Colorado Plateau

Iron-oxide concretions – curious-looking dark spheres – can be found by the hundreds of thousands in the dramatic red and white outcrops of Navajo Sandstone in the Southwestern United States. The quartz sands composing the Navajo Sandstone originated in the shifting sand dunes of a vast expanse of a Jurassic desert around 200 million years ago. The concretions typically consist of a sandstone core surrounded by a thick and hard iron-rich rind, and they have an interesting geologic history and Native American cultural history. Similar iron oxide concretions found on Mars, known as Martian spherules or “blueberries”, has spurred research into how concretions form on Earth and on Mars. Many questions remain. 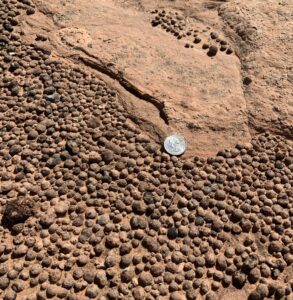 Concretions in a “puddle” accumulation, Navajo Sandstone near the southern end of Hole in the Rock Road, Grand Staircase-Escalante National Monument

Moqui Marbles in the Navajo Sandstone

During my recent wanderings through the Grand Staircase-Escalante National Monument in southern Utah, concentrations of these concretions, also called “Moqui marbles” after Hopi Tribe traditions, fascinated me. Concretions develop when concentric layers of iron oxides – specifically, hematite and goethite – build a strong rind around a softer sandstone core. Ranging from pea-sized to baseball-sized, most that I saw have spherical marble-like shapes, but they are also found in other odd shapes, from discs to hollow pipe-like forms, and some are fused together into doublets or triplets. Embedded within Navajo Sandstone outcrops, the concretions are gradually being released as the surrounding rock erodes away. Their hardness and resistance to weathering allows the concretions to collect on the surface in loose “puddle” accumulations. 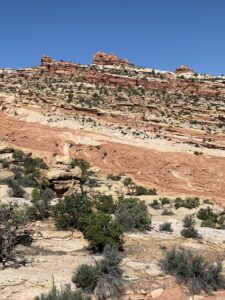 The distinctive red sands found in the Navajo Sandstone and other Mesozoic sedimentary rocks in the Southwest result from a fine coating of iron oxide on each sand grain, derived over eons from the breakdown of iron-bearing (silicate/ferromagnesian) minerals. When these became deeply buried beneath younger sediments and cemented, reddish sandstones developed. Groundwater circulating through sections of the rock dissolved some of the iron-rich grain coatings, leaving creamy white sandstone. The free iron that was now in solution traveled with the groundwater until the proper conditions arose for the iron to precipitate out and accumulate into the iron concretions. (Chemical complexities: the groundwater mobilizing the iron needed to be in a reducing state; the iron came out of solution when oxidizing conditions were encountered.) Tiny microbes appear to have helped the cementation process along. 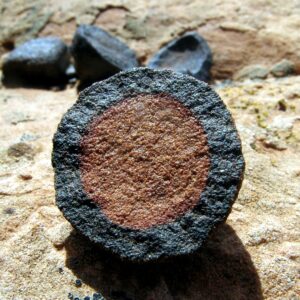 Cross-section of a Moqui Marble

In the Escalante region, geologists have found that whitish sections of Navajo Sandstone, where the iron was removed by leaching, tend to be concentrated near upward doming folds, or anticlines. These anticlines contain reservoirs where buoyant, migrating hydrocarbons rose and collected. The oil and natural gas accumulations are trapped beneath the Navajo Sandstone in much older rock formations (Triassic and Permian age). Faults and fractures, however, allowed ground water containing hydrocarbons (reducing fluids) to percolate upwards into the Navajo Sandstone, where the iron coatings on sand grains were removed and the iron transported to where the concretions we see today developed.

Uplift of the Colorado Plateau, the Rocky Mountains, and other mountain ranges in the region are products of a time of tremendous tectonic activity, known as the Laramide orogeny. Along with the folding and faulting that shaped the anticlines, erosion exposed ancient sedimentary rocks including the spectacular Navajo Sandstone. Age dating of radioactive elements shows some concretions in the Escalante region formed 20 to 25 million years ago, with a second batch dated to about 2 to 3 million years ago. There is a clear association with geologic structures that were shaped during the Laramide orogeny. The younger set of concretions is correlated with the time that the Colorado River started to cut through the Navajo Sandstone near the mouth of the Escalante River, altering groundwater flow in the region. 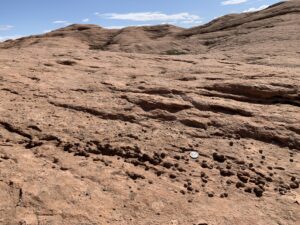 Calling Cards of Departed Ancestors and Beyond

The name Moqui marbles that is used for the concretions comes from a Hopi word that is translated as “dear departed ones” or “the dead”. Hopi traditions say the spirits of their ancestors return to Earth at night to play games with the marbles, and they distribute them across the landscape. After the games, the spirits leave the balls behind so that their relatives can be reassured that they are happy and content in the afterlife.

In a modern twist, spiritualists tout Moqui marbles as having the power to connect people with the high vibration energy of the Earth, realign energy centers, relieve energy blockages, contact extra-terrestrials, improve enjoyment of life, bring calm and peace to your soul, and other intriguing properties. (And yeah, I’m a skeptic….) The distinctive shapes have encouraged some to consider the concretions as male and female; having a pair is advised to help you balance your male and female energies. This brings up the question of how genders are mixed and matched, which could be complicated? I’ll just stick to the science….

In 2004, NASA’s Mars Exploration Rover Opportunity sent back surprising images of spherules that are formed by iron oxides and similar to the Moqui marbles found on Earth. Discovered unexpectedly in the Burns formation in Meridiani Planum, the false color images beamed back to Earth gave the spherules a bluish color, hence the name “blueberries”. Discovery of these spherules prompted research into the geochemical details of how concretions form in the Jurassic Navajo Sandstone in Utah, and in the Cretaceous Djadokhta Formation in Mongolia. Although these Earthly analogs don’t fit the Martian spherules exactly, there are many important physical similarities. 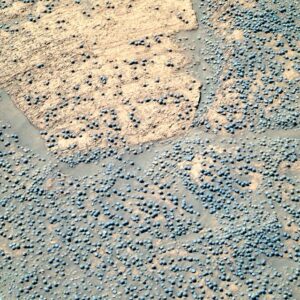 Based on detailed slicing, dicing and chemical analyses of concretions, scientists have developed several models for the formation of Earthbound concretions. Water is an essential component of many of these models, and so the similarities with Martian blueberries are another piece of data indicating water in the distant past of Mars. In addition, the evidence for tiny microbic life playing a role in the development of the Utah concretions suggests that signs of ancient life on Mars may eventually be revealed.

An alternative theory suggests that meteorites deposited the Martian spherules. Meteorites are believed to enter the thin Mars’ atmosphere at tremendous speeds, resulting in high heat that melts the meteor. Spherical drops of uniform sizes develop, and these become solid as they cool and approach the planet surface.

We need more data to unravel these mysteries. In the meantime, concretions are fascinating objects with colorful histories.

My photos from southern Utah, May 2021

Photo of inside of a Moqui marble by Mostly Deserts, June 2010. https://en.wikipedia.org/wiki/Navajo_Sandstone#/media/File:Broken_Moqui_Marble.jpg