A curious fact: Arabian Peninsula countries import tremendous amounts of sand. There is no shortage of this material in the Arabian Desert – beautiful quartz grains that have blown around for eons and are now beautifully rounded (hint!). The silicon and oxygen in desert sands are the two most common elements found on Earth. From the silicon bound into the obsidian and flint that our earliest ancestors used to chip rock tools, to an essential component of the computer chips that are transforming civilization today, silicon plays a major role in human history. 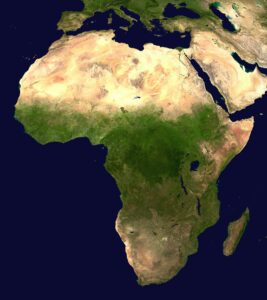 Our planet has thousands of miles of ocean beaches and vast deserts full of sand. The Sahara Desert extends across much of the African continent and adjoins the Arabian Desert. Almost 200 million years ago a huge part of the western US was covered by an ancient sand sea that rivaled the Sahara. Today, evidence of that desert is preserved in the spectacular scenery of Zion NP, Capitol Reef NP, Canyonlands NP, and many other parklands. Known as the Navajo Sandstone, the ancient dunes are preserved throughout an immense region that now encompasses parts of Colorado, Utah, Arizona and Nevada. This great expanse of rolling dunes also covered parts of California, New Mexico, and Wyoming (different rock formation names are used). Impressive!

Where did it all this sand originate? Granitic rocks. It’s a complicated story, but here’s a short version.  Over the past few billion years, colliding tectonic plates created vast pools of magma that cooled slowly deep underground. The first minerals to crystallize and sink to the bottom of these magma chambers are dense metals like iron and magnesium.  The liquid magma that remains is enriched in silicon, and when it finally cools, much of the silicon is bound into quartz crystals in granitic rocks.

Eventually, a collision between tectonic plates will push the granitic rocks upwards into mountain ranges. Wind and rain erode the rocks, removing the softer minerals but having minimal impact on the hard and stable quartz grains, which can persist almost indefinitely. Some sand solidifies into sedimentary rock such as the Navajo Sandstone. As more time passes, sandstones weather into individual sand grains that can again be blown around again for eons.

So why do some countries need to import sand? The local sand doesn’t have good engineering characteristics –particularly if the grains are fine and well-rounded. The size, degree of rounding, and impurities in sand grains strongly control performance when used as ingredients for concrete, glass, and in electronics. Also, massive quantities of sand are needed for the construction of buildings and infrastructure such as roads and airports, for the creation of artificial islands, for shale gas extraction and beach repair. Sand is becoming a globalized commodity, complete with scarcities that are leading to illegal trading and profiteering. And along the way, serious environmental damage and even violent conflict are occurring. But that’s another story.

SkySat satellite image of The Pearl-Qatar in Doha, Qatar.  https://commons.wikimedia.org/w/index.php?curid=68017752