Encounters with the ENSO – Part 2

Encounters with the ENSO – Part 2

El Niños, the warm phase of the El Niño-Southern Oscillation (ENSO) climate pattern, could be devastating for ancient Andean societies. Direct geologic evidence of early El Niño events is scarce, as flood and landslide deposits left by early occurrences are typically reworked in subsequent severe events. Clever archaeological sleuthing, however, has revealed details of event recurrence and variability. One notable approach involves analyses of the water temperature preferences of mollusks found in ancient Andean settlements. An abundance of warm water species in the middens, or trash piles, at archaeological sites indicates that the nearshore ocean temperatures were warm and an El Niño pattern dominated. (The El Niño and La Niña phases of the ENSO are described in Part 1 of this post, here:  https://roseannechambers.com/encounters-with-the-enso-part-1/ )

Today, frequent but mild El Niño events have limited consequences, while the very strong and rarer events can be devastating. In 1998 during a severe El Niño, the temperature of ocean water offshore from Peru rose as high as 20 degrees F above the typical temperatures. During the same 1997-1998 El Niño, the Tumbes region on the northwest corner of Peru received a drenching 130 inches of rain, when less than 8 inches is normal. These observations are a window to the past and indicate the severity of the El Niño events that ancient Andean cultures experienced. 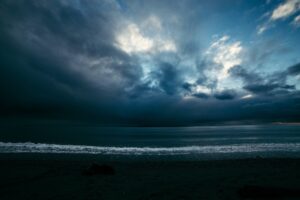 The warm ocean water and heavy rain associated with El Niños typically last from about nine months to one or two years. The frequency of these events has varied over the past several thousand years. Along the north coast of Peru today, historical records indicate very strong El Niño events occur about every 25 to 50 years and moderate to strong events every three to four years. Paleoclimate data indicate that El Niño events in the central Andes were either absent or extremely rare for about 3,000 years ending 5,800 years ago. Then, these events probably occurred every 50 to 100 years up until roughly 3,000 years ago. After that time, researchers believe El Niño occurrences increased to the higher frequencies that continue today.

For ancient Andean societies, a severe El Niño could destroy years of human toil in hours. Torrential rains and floods from rivers that overtopped banks would wash away agricultural fields, roads, and even entire communities. Homes and other structures built from sun-dried adobe bricks collapse into a muddy mass and are swept away. Fields are stripped of fertile topsoil and refilled with either silt or with gravel and boulders. Irrigation canals are destroyed; the slopes that surround these systems and riverbed gradients are modified by erosion. And in the warm El Niño-influenced ocean waters, fish and other marine species that provided essential sustenance vanished.

After an El Niño, large numbers of disease-carrying mosquitoes and other insects breed in standing water and bring diseases, including malaria and dengue fever, to the local populations. Locusts plus mice and other rodents can proliferate and consume crops that either escaped the flooding or were planted shortly after the floodwaters receded. Prevailing onshore winds blow silt and sand off the river deltas and away from the sediment ridges formed along beaches during the flooding; the fine particles blanket settlements and agricultural fields with thick layers of sediment. The destruction of farmland leads to starvation, and landless farmers seek refuge in other areas. High demand for available arable land leads to conflicts.

The northern coast of the Peruvian Andes experiences the most severe effects of El Niño events in South America. In an unfortunate twist of fate, the ancient people who took advantage of the richest marine resources, courtesy of the Humboldt Current, also happened to reside in the pathway where El Niño effects are most devastating. The construction of monumental temples along the coast were likely orchestrated by leaders who persuaded the populations that adverse weather could be reduced by honoring the supernatural forces they believed were responsible for rain. This claim could be convincing for a while, since many El Niño events had only mild impacts and occurred infrequently early in Andean cultural history. Then things changed when warm waters began appearing off the coast more regularly beginning around 3,000 years ago. When the erratic nature of El Niños was encountered, authorities attempting to maintain social order and their own political positions found themselves and their followers in a drastic decline.

Attempts to Cope with Floods and Famines

Ancient Andeans could not have understood that El Niño events developed far to the west, in the Pacific Ocean. From their perspective, the floods in the rivers that descended from the mountains, as well as the dark clouds and heavy rains over the coast, appeared to be originating over the highlands to the east. In an intriguing correlation, around the time that El Niños increased in frequency along the northern coast, construction of monumental temples began in mountainous settings located high above the hardest hit coastal sites. Perhaps self-confident leaders in the mountains believed they could influence this weather phenomenon, and convinced the coastal people of their power? 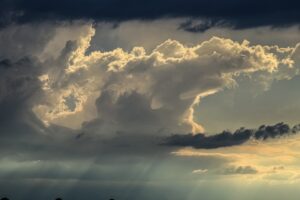 The most prominent of these highland sites, built beginning around 3,000 years ago, was Chavín de Huantar, the center of a religious cult visited by large numbers of pilgrims over hundreds of years. Archaeologists have found artifacts showing the religious iconography of Chavín in the coastal communities that were suffering from the effects of El Niños, indicating connections with this highland culture and. (Aspects of the Chavín culture are described in several of my previous posts, including https://roseannechambers.com/water-and-power-chavin-de-huantar/ ).

In our secular and highly technological societies today, we can easily underestimate how strongly indigenous people could interpret environmental disasters — including the heavy rains of the El Niño weather pattern — as related to human interactions with the supernatural world. Religious practices assumed great importance in these periods of stress, and elaborate rituals were employed in efforts to appease the deities and decrease risks.

Many ancient Andean cultures made both human and animal sacrifices in ritual contexts. Sacrifices of llamas and guinea pigs were typical, but perhaps most disturbing to us today were human sacrifices, including those of children. The ancient Andeans were not unusual in including this form of organized violence in their cultural practices. In the New World, from modern Mexico to South America, various forms of ritualized bloodletting, including human sacrifice, were widely practiced for thousands of years.

Under the duress of what appear to be ancient El Niño-induced environmental disasters, unusually large numbers of sacrifices were conducted in rain and mud by the Moche culture around 600 CE, and about 800 years later by the Chimú culture between about 1400 to 1450 CE. These ceremonial events took place close to the crashing waves of the Pacific Ocean at the mouth of the Moche Valley, near the modern city of Trujillo. 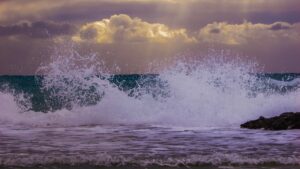 On sand dunes near the coast, in the Chimú ceremony more than 140 boys and girls chosen from the multiple ethnic groups in the state were sacrificed, along with more than 200 young camelids (probably llamas, based on dental characteristics, but possibly also alpacas). Most of the children were between the ages of eight and twelve years old, and the camelids around the age of only one year old. All appeared to have been sacrificed at about the same time, and most were arranged in large pits dug through a layer of mud down into clean sand.

The Moche sacrifices were on a temple plaza, a formal place of ritual and power. At least 75 male warriors were sacrificed within a time slice of days or possibly weeks. Their bodies were found in a vertical sequence separated by five separate layers of the mud that had washed down from the adobe brick walls of the temple. The Chimú and Moche sacrificial rituals, horrific as they are, indicate the absolute desperation authorities faced in appeals to their deities to stop the devastating rains.

Meteorologists today let us know when to expect the disruptions of the ENSO. We are fortunate that we live in a society that can be – and always should be — informed by science.

Dark clouds and sea by Free-Photos from Pixabay https://pixabay.com/photos/seaside-stormy-sky-sea-storm-1149687/

Clouds and sunlight by Philip Olson from Pixabay https://pixabay.com/photos/clouds-thunderhead-sky-storm-5280576/

Waves and clouds seascape by Dimitris Vetsikas from Pixabay   https://pixabay.com/photos/wave-smashing-wind-storm-sea-1939190/