In the recent geologic history of the Grand Canyon, volcanoes erupted in the Colorado River channel and on the rim, pouring lava over the canyon walls. Hot lava often flowed down the river channel for tens of miles; other times, it dammed the river, impounding water behind dams that eventually breached, sometimes releasing catastrophic floods. When most of us think about the impressive geology of the Grand Canyon, our focus is on the ancient rocks. Most of these cover the immense range of time from hundreds of millions to as much as about 1.8 billion years old. Within the past one million years, however, volcanoes have created striking displays of rocks that are interesting from both geologic and aesthetic perspectives. 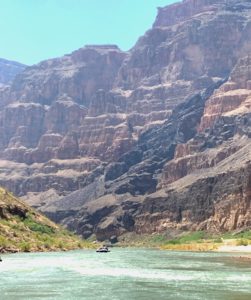 Recently, I had the good fortune of joining a group on a river rafting trip that extended over the entire 280-mile (450 km) length of the Grand Canyon. As a geologist with a strong interest in stratigraphy, a trip highlight for me was the exceptional narration by geologist Wayne Ranney. Wayne’s decades of experience studying the geology and exploring the Canyon have given him a deep level of knowledge that is unrivaled; it was a great pleasure to travel with him.

Giant flows of basaltic lava cascade over the rocks along Grand Canyon walls—and what we can see today are only remnants of the enormous volume of lava that poured into the Colorado River between about 850,000 and 80,000 years ago. Some of these lava flows extend as far as 84 miles (135 km) downriver. The lava flows contribute to many of the rapids that make the river an exciting, world-class place for boaters. The dramatic and enormous rapids in the Lava Falls area —considered among the largest and most difficult of the Grand Canyon rapids—result from rocks emplaced by at least ten voluminous lava flows between about 700,000 to 400,000 years ago, plus a few isolated smaller flows around 250,000 to 100,000 years ago.

Between the narrow canyon walls, lava dams formed repeatedly, impounding the river water and then eventually breaking down. Based on detailed age dates, geochemical analysis, and geologic field mapping, researchers suggest 17 separate lava flows or series of flows occurred. Most, if not all, produced lava dams that temporarily halted the flow of the Colorado River. Dam thicknesses varied from 115 feet (35 m) to at least 1,080 feet (330 m). Some dams likely stayed intact for tens or hundreds of years; others probably lasted for millennia. 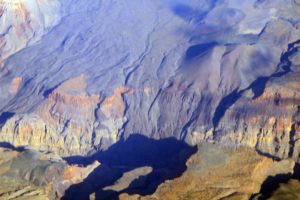 Vulcan’s Throne (distinct cone on the right center) and dark lava flows draped over the colorful sedimentary rocks on the Grand Canyon rim (black zone in lower center is a shadow). 2008 (Wikipedia)

Volcanic plumbing is visible deep in the Grand Canyon, including plugs, sills and dikes that originated underground and are now exposed by erosion . One large plug, named Vulcan’s Anvil, is prominently located in the middle of the river. Lava from the eruption that created this feature, called the Upper Black Ledge flow, was about 230 feet (70 m) thick at Vulcan’s Anvil and flowed downstream for at least 47 miles (76 km).

While floating down the river, the array of patterns in the basaltic lava was fascinating. Columns of rock arranged into huge fan shapes are especially impressive. Colorado River water interacted with hot lava as it cooled, creating these notable forms. Two-tiered cooling structures, as shown in the photo below, are common. Two textures developed: the lower colonnade has straight, well-formed vertical columns, and the upper has smaller and more randomly oriented ones. A combination of water-steam interaction and flowing river water that overtopped the hot lava created these different cooling structures. 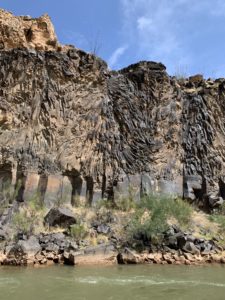 Note: columnar jointing (cracking or fracturing) in a regular array of polygonal prisms or columns develops as the hot lava cools and contracts. It is characteristic of many volcanic rocks, including Devils Postpile in the Sierra Nevada of California, Devils Tower in Wyoming, and the Giant’s Causeway on the coast of Northern Ireland (check out the great photos in the Wikipedia entries for these features). 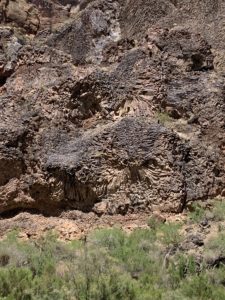 The basalt flows found in the Grand Canyon originated primarily from the Uinkaret volcanic field, located in northwestern Arizona to the north of western Grand Canyon. This field is still considered to be active and capable of future volcanic eruptions. The most recent lava flow from this field, named Little Spring, probably erupted around 1050 to 1200 CE, based on age dated Native American pottery shards found welded into the lava. The nearby San Francisco volcanic field is also active. The most recent eruption in this field occurred at Sunset Crater, dated at about 1084 CE. When will the next eruptions in the Uinkaret and San Francisco volcanic fields happen? No one knows – we can only guess.

The 1869 expedition down the Grand Canyon, organized by the brave explorer John Wesley Powell, has the following report entry dated August 25, 1869:

Great quantities of lava are seen on either side; and then we come to an abrupt cataract. Just over the fall a cinder cone, or extinct volcano, stands on the very brink of the canyon. What a conflict of water and fire there must have been here! Just imagine a river of molten rock running down into a river of melted snow. What a seething and boiling of the waters; what clouds of steam rolled into the heavens!

This would definitely be an impressive sight. And eventually, it could happen again. We live on an active planet! 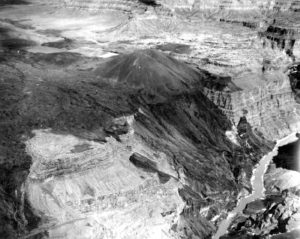 Photo of Vulcan’s Throne and Lava Falls, where the Uinkaret Volcanic Field pours into the Grand Canyon, by Doc Searles from Santa Barbara, California, 2008. https://commons.wikimedia.org/wiki/File:Lava_Falls,_where_the_Uinkaret_Volcanic_Field_pours_into_the_Grand_Canyon.jpg