How Our Geologic Age May Be Remembered

How Our Geologic Age May Be Remembered

What will define the beginning of the Anthropocene—the proposed subdivision of geologic time marking the onset of significant human impact on our planet’s geology and ecosystems? A million years from now, only traces of metal car parts, cement buildings, glass coke bottles and ceramic plates will remain. But there is another material that just might be clearly recognizable since it is being produced and widely disposed of around the entire planet. You can probably guess–plastic.

A New Material for the Ages

A new type of “stone” that contains a mixture of natural sediments and debris, including wood and shells, and is cemented together by hardened plastic, was first recognized by an oceanographer on a California beach in 2006. Then, in 2014, a Geological Society of America (GSA) journal had an article about plastic waste referring to the new material as “plastiglomerate” (Corcoran, Moore and Jazvac, 2014). The researchers recognized this mixture on the island of Hawaii, where numerous beach campfires have combined sand, gravel, and organic debris with melted plastic. A solid, dense, and stable new material is being created, and some pieces are already being buried by layers of sedimentary material. Plastiglomerate has the potential for being distributed worldwide. Samples are on display at museums around North America and Europe; there is even an entry about this material in Wikipedia. 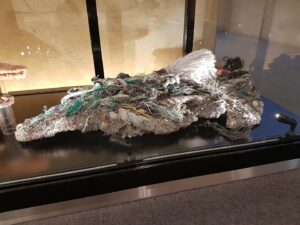 Plastiglomerate from Kamilo Beach, Hawaii displayed in the exhibition One Planet in Museon (The Hague, The Netherlands)

Marking the Passage of Time

For many years scientists have been considering a proposal to define a new formal unit of the geologic time scale known as the Anthropocene, distinct from our current geological epoch of the Holocene. Currently, governing bodies have not ratified this proposal, but many are studying the issues involved, including where to place the boundary marking the beginning of the Anthropocene. A starting date in the mid-20th century has strong support, tied to the traces of radioactive material left by nuclear weapons, heavy metals from burning fossil fuels, and not surprisingly, the ubiquitous presence of plastics.

Upper and lower boundaries of units of time on the geologic time scale are based on markers in the rock record. Most are described regarding fossils, including transitions between different faunal stages. For example, mass extinction events, including the Permian-Triassic extinction about 252 million years ago, when over 90% of species died, and the Cretaceous-Paleogene extinction about 66 million years old, are markers of the corresponding periods in the geologic time scale.

Many units of time have internationally agreed upon reference points marking lower boundaries. An international commission that defines these markers, which are officially known as “Global Boundary Stratotype Section and Point” (GSSP) locations, has a long list of criteria that must be fulfilled. These include a primary marker (usually the first appearance of a fossil species); secondary markers (more fossils, or a high level of a metal like iridium); an outcrop of rock with adequate thickness; and correlation with outcrops of rocks of the same age globally. Importantly, unit markers can be dug into, sampled, and hit with a hammer.

Plastiglomerate may survive to form future “fossils”. Since increasing amounts are being deposited into the sedimentary record worldwide, plastiglomerate has the potential to form a marker horizon at the base of the Anthropocene. Using human pollution as a geologic marker would definitely be an ignoble “first” in world history. 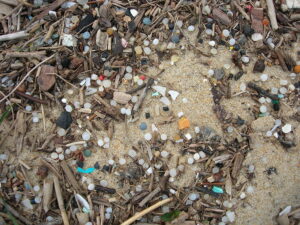 Plastic pellets, also known as nurdles or mermaid tears, on a beach in southwest France

The amounts of plastic being produced on our planet are staggering. We can find microplastics from the Arctic to the Antarctic. Plastic trash is found on the heights of the tallest Himalayan mountains, including Mt Everest, and down into the deepest ocean depths of the Mariana Trench, where a plastic bag was observed floating at about 36,000 feet below sea level.

Of all the plastic produced in the past several decades, only an estimated 10 percent has been recycled. Plastics are difficult to reuse, as their chemical structure is quite variable and generally resistant to separation processes. Improved recycling methods continue to be in experimental stages, but these will probably be useful for only a small fraction of plastic produced. In the meantime, what you putting into your residential and office recycling bins will probably end up in a landfill — or the ocean.

You don’t have to dig into the topic very deeply to learn that leaders in plastic production industries leaders knew way back in the 1970s that efforts to recycle plastic on a large scale were highly unlikely. Corporate stewards pondered the brakes government regulations might put on production, and in their wisdom decided that if they could convince the public that public recycling was a possibility, then plastic usage — not to mention plenty of profits — would increase. Industry propaganda continues, and plastic waste continues to pile up. (LOTS of info about this on the web — you can start by searching “where does plastic waste go?”)

Especially concerning are the thousands of tons of plastic pellets polluting oceans and beaches worldwide. Also called nurdles, or (sadly) mermaid tears, enormous amounts are released in careless handling at production sites and in shipping accidents. Fish, birds, and other wildlife ingest large amounts, which are often lethal. The tons of pellets blanketing Sri Lanka beaches from a spill in June 2021 are just one of the latest examples.

Incorporated with rock fragments and burned on beaches and in landfills around the planet, the amount of plastiglomerate is growing. 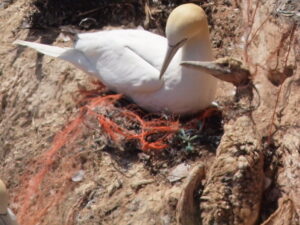 For those of us concerned about plastic pollution, the past year has been disastrous. The increase in plastic usage during the coronavirus pandemic, including single-use disposable products for takeout food, plastic bags in grocery stores, plastic gloves in widespread use–this depressing list could go on and on.

AND — the web is full of tips on ways for individuals to limit consumption of plastic. Try practicing one or two–or better yet a dozen! The more people that adopt these practices, the better for our environment (if not for plastic manufacturer profits, but oh well). And just maybe, we have a chance to at least limit the thickness and areal extent of this possible boundary zone of the Anthropocene.

Photo of plastic pellets/nurdles or mermaids’ tears on beach southwest of France by maldeseine, 2011. https://commons.wikimedia.org/wiki/File:Granul%C3%A9s_plastiques_industriels_sur_une_plage_de_la_c%C3%B4te_Aquitaine.JPG

Photo of Plastiglomerate from Kamilo Beach displayed in the exhibition One Planet in Museon (The Hague, The Netherlands) by Aaikevanoord, 2016. https://en.wikipedia.org/wiki/Plastiglomerate#/media/File:Plastiglomerate_Museon.jpg

Photo of dead Northern gannet (Morus bassanus) on Helgoland, Germany, trapped in a nest built of old nets and other plastic waste by Engleberger, 2011.  https://commons.wikimedia.org/wiki/File:Basstoelpel-Helgoland_(cropped).JPG