Ancient people with hunting and gathering lifestyles were making fired clay pottery many thousands of years ago. This is surprising! If you are a hunter-gatherer and roaming around a large territory, you would naturally avoid carrying heavy possessions. Lightweight, woven fiber baskets and nets, leather bags, and sometimes dried gourds, would provide the principal go-to containers.

Once people settled down in permanent settlements and farmed, pottery became especially useful. The weight was no longer an important consideration; the durability became an asset, and fired pottery allowed cooks to boil cultivated rice and other grains over fires. Accordingly, scholars believed that pottery appeared only when people adopted sedentary lifestyles. Except that isn’t what happened. New research and the improved accuracy of radiocarbon age dating techniques have moved the sedentary-life-necessary-for-pottery-use theory into the dustbin of history.

During the tens of thousands of years that Homo sapiens have roamed the planet, the principal lifestyle practiced has been hunting and foraging for edible wild plants. So how—and when—did fired pottery arrive on the scene? Perhaps the ancient ones made the earliest discoveries when a campfire burned above clay-rich soil, and after the ground cooled, the fire builders noticed the intriguingly hard surfaces? Also, pieces of unfired clay items might have fallen into fires and people could admire the improved qualities. High-temperature firing of clay objects produces highly useful utilitarian objects. Whatever happened on the road to making pottery, this technological development became a worldwide hunter-gatherer innovation.

Ceramic artifacts are extremely valuable to archaeologists. The durability of pottery means that ceramic items are preserved thousands of years after items made from plant fibers have disintegrated. The earliest known fired pottery dates to about 20,000 years ago, found in a cave in the Jiangxi Province of southern China. This was during the freezing temperatures of the Ice Age, by hunter-gatherers. Researchers have found more evidence of early pottery making by other hunter-gatherers, including about 15,000 years ago in Japan and in the Russian Far East, around 8,000 years ago in Brazil, and on the southeastern coast of North America around 5,000 years ago. None of these ancient societies practiced agriculture.

Why were these early people hauling around heavy pottery? Hints are available, as it turns out that scientists can identify tiny particles of prehistoric foods. Researchers have successfully identified biomolecules of fats and oils trapped within the porous walls of 15,000-year-old pottery made by the hunter-gatherer Jōmon culture of Japan.  The vessels had curved shapes and pointed bases. The reasons for the pointed bases are speculations, but this design would have made the pots easy to twist back and forth in the glowing embers of a fire, as well as to carry them in net bags. The pots were also small: around 4 inches (10 cm) tall, which made them more portable. Jōmon artists produced the oldest pottery in small quantities, suggesting specialized or ritual uses, rather than everyday usage.

The Jōmon period dates between circa 14,000 to 300 BCE, when hunter-gatherer and eventually semi-sedentary crop-tending populations flourished on the islands now part of Japan.  The name Jōmon means “rope-patterned”, referring to the impressions on the pottery created when the artists pressed rope into the clay before firing. The culture is notable for the antiquity and variety of pottery produced, which archaeologists have classified into over 70 styles. When Jōmon people developed lifestyles that relied increasingly on farming, artists crafted pottery with more complex designs. These included beautiful and elaborate wavelike rims, such as in the photo below. 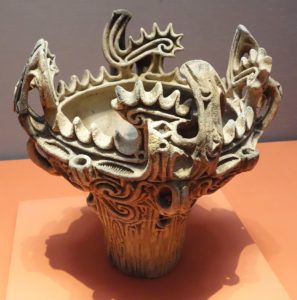 Analysis of  ancient Jōmon pots with pointed bases found on Honshu Island shows people used these vessels for cooking fish, most likely salmon. Finding enough artifacts to determine more about the lifestyles of these hunter-gatherers, and particularly why some were using pottery, is challenging. (Plus, the oldest pottery found is too rare and valuable for potentially destructive analyses.) Researchers therefore looked at the more recent emergence of pottery in North America.

From pottery fragments gathered from a few dozen different seasonal and semipermanent campsites across northeastern North America, researchers have found that the Native Americans also made small pottery pots–and these had pointed bases and contain remains of fish. They analyzed circa 3,000-year-old pottery fragments found near large bodies of water, including the shores of Lake Erie and on the coast of Maine. At these sites, large social gatherings of multiple communities may have gathered at certain times of the year. The fish oil remnants suggest the gatherings probably occurred when salmon were spawning. The small sizes of the pots imply the pottery may have been ceremonial containers used to prepare highly valued food for a special occasion.

Researchers suggest that the ancient people were using a specialized “recipe” for rendering fish oils for storage—a process that typically involves heating the fish for long periods of time. The vessels could have been used to make fish glue as well. This would have been a valuable material, used to secure fiber cords and other items.

The similarities between the North American and Jōmon styles of pottery and their use suggest that in both cultures, larger communities collaborated to harvest seasonally abundant aquatic resources, and store the products for future use. Separated by thousands of miles and millennia, the pots likely had important symbolic roles to play in communal gatherings, indicating that people followed similar traditions. Fascinating! 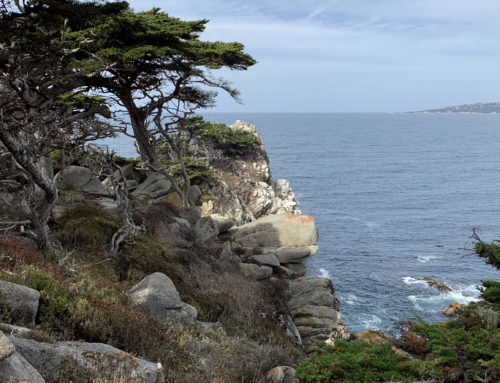