The demand for lithium is growing rapidly — and the Andes Mountains encompass a significant source of this metal. The salt flats that cover much of the region at the intersection of Bolivia, Chile and Argentina – called the “Lithium Triangle” – contain an estimated 50 percent of the lithium reserves on our planet. For over a century lithium has had numerous uses ranging from medications and cosmetics to the lubricants for aircraft, automotive, and industrial applications. Research that began in the 1970s led to the development of rechargeable lithium-ion batteries – and these have become essential for powering cell phones and laptops, electric cars and trucks, and for storing energy produced by the wind and sun.  The future of lithium is truly “electrifying”! 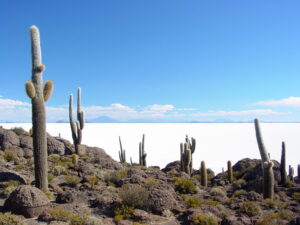 Often in my blog posts I connect a topic to ancient Andean cultures – but not this time, for the singular reason that lithium wasn’t discovered until 1817! As a highly reactive element, it doesn’t occur as a native, or natural, metal, and so it has to be separated from the surrounding materials. Lithium was first isolated in 1821 by a British chemist who used a direct electric current to drive a chemical reaction, a process known as electrolysis. Commercial levels of production were achieved in 1923 by a German company. The first major use of lithium was during World War II as temperature-resistant grease for aircraft engines. Lithium has also proven useful for a curious collection of other applications, including in mood-stabilizing drugs for symptoms of bipolar disorder and depression, to produce tritium for nuclear fusion weapons, and in the manufacture of glass and ceramic glazes.

Lithium is widely distributed around the Earth as a constituent of sea water and in granitic rocks, salty brines and certain types of clays. With an atomic number of 3 it is the lightest metal and lightest solid element (it follows the even lighter elements hydrogen and helium on the periodic table). A soft and silvery-white material, it is highly flammable and is stored in mineral oil where it floats, an unusual feature that I found quite intriguing back in my chemistry lab days.

Lithium floating in oil. (Note: don’t try this at home!)

The Andes Mountains and lithium are linked for me in a personal connection. I first realized the power of this metal while hiking in the majestic Cordillera Blanca of northern Peru in 2006. Surrounded by jagged mountains dusted with snow, and by glaciers spilling down into sparkling waterfalls and fast-flowing streams that ran through narrow valleys where llamas grazed, it was an enthralling landscape – and my camera wasn’t working. Argh! Despite my best efforts to keep the camera as warm as possible, it was balking in the frosty temperatures – and this at the beginning of a 10 day trek, far from civilization.  Fortunately, a generous trekker in our group gave me a set of lithium batteries to try – and voila – no more camera problems. I was amazed — and grateful.

The first batteries with metallic lithium electrodes were developed in the 1970s, but they had the annoying habit of bursting into flames, as this metal reacts with water in moist air to form a flammable gas. Over the next few decades, clever researchers gradually improved the battery performance, culminating in Sony and Asahi Kasei releasing the first commercial rechargeable lithium-ion batteries in 1991. Ongoing research improved the safety and energy density.

Then in 2003, a small group of entrepreneurs with a goal of creating affordable mass market electric vehicles founded Tesla Motors. Elon Musk became a major investor in the new company in 2004, and after a start as chairman of the board of directors, Musk began to lead the company as CEO and product architect in 2008. The rest, as they say, is history.

Electric car sales have been booming during the past few years. In 2020 global sales increased by about 40%, following a similar rise in 2019. Tesla dominates the market, with Volkswagen Group second, and other car makers rushing to catch up. Many governments are using significant incentives to boost the sales of electric vehicles. China can currently claim nearly 50 % of the electric cars on the road, followed by Europe (the highest market share is in Norway, with Iceland second and the Netherlands third), and then the United States; these three regions account for over 90% of electric vehicle sales in 2019.

The challenge with vehicle batteries continues to be how to balance driving distance with cost. Battery technology is evolving quickly, however, and many believe electric vehicles will have upfront costs similar to internal combustion vehicles within a few years. Now, we are at a point where we can say: the future is lithium. (This, after a generation was amused by the single word “plastics”, given to Dustin Hoffman’s character as advice for a future profession, some 50 years ago in the movie “The Graduate”.) 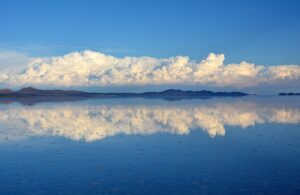 Clouds reflected in an ephemeral lake at Salar de Uyuni

Tesla, Inc. today owns and operates a lithium-ion battery and electric vehicle component factory near Reno, Nevada. Known as Giga Nevada or Gigafactory 1, Tesla has plans to build several more giga-factories. Since the grand opening in July 2016, the enormous Nevada facility has been supplying battery packs for Tesla’s electric vehicles using lithium mined in the Silver Peak region near Tonopah, about 200 miles south.  This mine is in the salty brine of a dry lake bed in Clayton Valley, and for now it is the only lithium-producing facility in the United States. The operator of the mine, Albemarle Corporation, is currently investing tens of millions of dollars to significantly increase production at this mine. 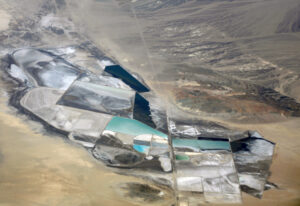 A second lithium mine in Nevada is on the horizon. At Thacker Pass, about 50 miles north of Winnemucca in the northern part of the state, Canadian-based Lithium Americas has been planning a lithium mine on thousands of acres of land managed by the Bureau of Land Management. In one of the final actions undertaken by the Trump administration in January 2021, the federal permit needed to begin construction on this open-pit mine was granted. Shortly after receiving that approval, Lithium Americas reportedly raised a few hundred million dollars, with much of this likely to be used to develop the Thacker Pass mine.

Mines are messy. The list of potential adverse impacts is long and troubling, ranging from disruptions caused by increased heavy vehicle traffic and reliance on scarce water supplies in remote areas; to landscape and habitat destruction; to contamination of soil, groundwater and surface waters; public health concerns, and many more. For both the Silver Peak expansion and the planned mine at Thacker Pass, protests have been registered by ranchers, wildlife managers, and many others concerned with environmental preservation. Although the ultimate objective of transitioning from fossil fuels and providing “clean energy” is commendable, there are significant associated costs.

At present, there is high demand for lithium from countries around the world. Where prospectors are finding this metal lurking in our landscapes will be the topic for a future post.

Photo of lithium floating in oil by Tomihahndorf at German Wikipedia.  en.wikipedia.org/wiki/Lithium#/media/File:Lithium_paraffin.jpg

Photo of cloud reflections at the Salar de Uyuni by otsuka88 from Pixabay. https://pixabay.com/photos/bolivia-salar-de-uyuni-salt-lake-1802042/

Photo of lithium mine at Silver Peak in August 2010 by Doc Searls from Santa Barbara, USA.      wikimedia.org/wikipedia/commons/a/a9/Chemetall_Foote_Lithium_Operation.jpg