The title says it all: “The Mw 5.1, 9 August 2020, Sparta Earthquake, North Carolina: The First Documented Seismic Surface Rupture in the Eastern United States” (Figueiredo et al, 2022). Lots of information is packed into those words. As a geologist who studied earthquake hazards for decades, this title caught my eye, and I can explain why this event is so significant. Importantly, it provides evidence of our limited knowledge about the hazards presented by earthquakes.

It can be quite dramatic when an earthquake tears apart rock, soil, and the puny structures built by humans above a rupture zone. Check out the scarp below in my photo of the surface rupture of the 1954 (M6.8) Dixie Valley earthquake in Nevada. When this dramatic scarp formed, the ground displacement extended for about 28 miles (46 km). The scarps have been well-preserved in the arid desert climate, so that nearly 70 years later, they can still be seen today. Think about what could have happened if your home and neighborhood had been located on top of an unrecognized fault like that one, and then the earthquake happened…it would be all bad!

Let’s look at the Sparta earthquake description in more detail. First, scientists use several different magnitude scales to report the strength of an earthquake, and these result in small differences in reported magnitudes, which are generally indicated as “M”. The moment magnitude scale, or Mw, is most appropriate for medium to large earthquakes. So, “Mw 5.1” means the Sparta earthquake was of a moderate size. This event was still large enough to be felt widely in the eastern and central US, and to cause extensive damage in the Sparta region, including cracking and shifting of foundations, collapsing walls and chimneys, and damage to roads and utility lines. Fortunately, there were no casualties, but the damage prompted North Carolina’s governor to declare a local state of emergency. A shallow origin point for this earthquake, and soft sediments that amplified the earthquake waves in the region, contributed to the destruction.

Earthquakes occur everywhere on our planet, but they are most common along active tectonic plate margins, such as in California where the Pacific plate is sliding past the North American plate along the San Andreas fault zone. The northwestern corner of North Carolina, where the Sparta earthquake occurred, is far from a plate boundary and in an intraplate setting where moderate to large earthquakes are rare. (There are notable exceptions, including the 1811-1812 New Madrid sequence, with three M7 or greater earthquakes and the 1886 Charleston, South Carolina, M6.8-7.2, plus a few other smaller earthquakes.) The Sparta earthquake occurred at shallow depth on a pre-existing but unrecognized fault with an orientation consistent with the regional stress field and had left-lateral reverse motion.

Ground surface ruptures are rarely reported for earthquakes less than M6, so the Mw 5.1 Sparta earthquake is especially unusual. The Sparta ruptures were identified along a zone about 1.2 miles (2 km) long, and the scarp averaged 3 to 4 inches (8 to 10 cm) high, with a maximum observed height of ~10 inches (~25 cm). Doesn’t sound too significant, unless such a break were to occur beneath the foundation of your building.

Reportedly, the Sparta earthquake produced the first documented surface rupture from faulting east of the New Madrid seismic zone (located along the intersection of Missouri, Arkansas, Kentucky, and Tennessee) – or the eastern one-third of the USA. Decades ago, I was part of a small group that studied the Meers fault near Lawton in southwestern Oklahoma. At that time, the fault scarps we mapped were the farthest east surface ruptures in the US. (I haven’t followed the earthquake scene closely in the past few years; perhaps other surface faulting has occurred between that boundary and the New Madrid zone to the east – or perhaps New Madrid is more familiar to most than Lawton, Oklahoma?) The available empirical relationships in use for seismic hazard assessments are based on magnitude and surface deformation data; these would have suggested that the Sparta earthquake had a larger magnitude. Nature keeps giving us new information.

In California, the hazards of earthquake surface ruptures are well-recognized. The 1971 San Fernando earthquake (M6.6) was accompanied by extensive surface faulting in a densely populated area. Major damage occurred, including the total collapse of hospital buildings, roadway failures and freeway interchange collapses, and the near failure of a dam that resulted in the evacuation of tens of thousands of downstream residents. In 1972, California legislators passed a law to mitigate seismic hazards from surface ruptures. Known as the Alquist-Priolo Special Studies Zone Act, detailed maps of the surface traces of known active faults have been published. New construction within these zones is restricted, and there is a requirement to disclose if a property lies within one of these zones before selling the property.

Many earthquakes, however, do not have surface ruptures—especially those that are small, or deep, or in intraplate settings such as the Eastern US. And even in well-studied, seismically active regions like California, there are many unrecognized faults. The 1994 M6.7 Northridge earthquake beneath Los Angeles caused significant damage, but no surface rupture was recognized because this earthquake was on a “blind” thrust fault. In the absence of any surface expression of a potentially active fault, it is not surprising that it is challenging to recognize locations where surface displacement could occur during future earthquakes. Increased knowledge and availability of remote sensing methods, such as ground penetrating radar, can be useful for recognizing faults.

There are many things we don’t understand about earthquakes. As a seismologist colleague told me decades ago, seismology is an infant science. More surprises are ahead! 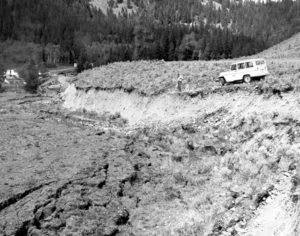 My photo of scarp from Dixie Valley earthquake, September 2020