Fire has been both a friend and an enemy throughout our history. The earliest humans cooked meat to fuel our bigger brains and increased endurance. Indigenous people intentionally set fires to encourage young plants and improve wildlife habitat for hunting; the low-intensity burns helped to prevent massive forest fires. Fast forward to the past few hundred years, and people have used fossil fuels to light up dark nights and power machinery. We live on a flammable planet filled with abundant oxygen, carbon-rich vegetation, seasonally dry climates, and natural ignition sources from lightening and volcanoes.

Humans have always had a unique relationship with fire. Now, like many other changes that are occurring on our planet, fire is taking on new meanings. Across North America and Europe, and from the Amazon to the Arctic, wildfires have been erupting with unprecedented sizes and intensities. A few years ago, a scientist came up with a name for this new age: Pyrocene.

Pyrocene–and Anthropocene—both names for that reflect the tremendous changes humans have set into motion on the Earth.

Many ecosystems have evolved with fire, which provides beneficial impacts for native vegetation and animals. Many plant species depend on fires to create opportunities for growth and reproduction. Wildfires are part of our landscapes, and in places like California, they will always be with us.

Unfortunately, a warming climate with multi-year droughts, and more than a century of fire suppression efforts, has set the stage for the catastrophic fires we are witnessing. The summer and fall seasons in California and other western states are now aptly referred to as smoke and fire seasons. Sobering news about enormous wildfires raging through drought-stricken regions of the west continues to roll in, month after month. 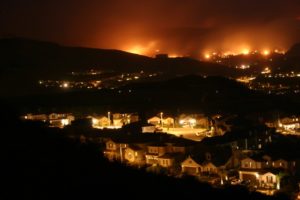 A global perspective of wildfires over the past few years–especially, the enormous fires that burned for months in Australia, Brazil, Greece, and many other countries–makes it clear that gigantic and difficult to control fires are a part of the new normal, everywhere on our planet. On some continents, fires are even occurring in ecosystems such as rainforests, where fire events have been extremely rare throughout evolutionary history. And wherever catastrophic fires occur, there are staggeringly costly human, economic and ecological tolls.

We can implement land management practices to help control the damage. Intentionally set, prescribed fires can reduce crowding of vegetation beneath trees, eliminate dead plant debris, and lower the density of tree covers. Future wildfires will be more manageable and easily suppressed by firefighters. Other measures, from insurance reforms to land use zoning, can also be part of the solution. 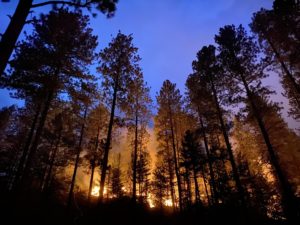 Thinking About the Pyrocene

Stephen Pyne coined the term Pyrocene in 2015. He is also the author of a new book – The Pyrocene: How We Created an Age of Fire, and What Happens Next (University of California Press), to be published in September 2021. It should be a fascinating read. Pyne is a Professor Emeritus at Arizona State University and a historian who studies fire; in addition, he had first-hand experience during 15 seasons with a fire crew at the North Rim of the Grand Canyon.

In a University of California Press blog post, Pyne describes burning fossil fuels in air tankers and helicopters, bulldozers and chainsaws, as essential for attempts to remove fire from some landscapes. Ironically, the fossil fuel fires are required to fight the out-of-control fires our land use practices have created. And we are in a fire age – equivalent to an ice age. Specifically, the effects are a climate upheaval, changes in sea level, regional shifts in biogeography, and mass extinctions–the Pyrocene.

Pyne describes the importance of prescribed fires. He notes that attempts to exclude fire by shutting down power lines and closing national forests isn’t a sustainable strategy. He says landscape fire cannot “be replaced like candles by light bulbs or vaccinated away like smallpox. It’s more like the flu, always tweaking its appearance, constantly needing boosters, never to be expunged.” Make sense.

We are living in the age of fire, but like the human-induced changes that are altering global climates, measures are available to help mitigate the worst of the effects. We need to implement them.

Map of fires in the US and Canada on September 7, 2021, Fire Information for Resource Management System (FIRMS), NASA and USFS  https://earthdata.nasa.gov/earth-observation-data/near-real-time/firms

Photo of wildfires in New Mexico in 2020 by USFS, Sept 18, 2020    https://commons.wikimedia.org/wiki/File:New_Mexico_Wildfires.jpg