Grand Canyon, Zion, Arches, Canyonlands, and other national parks on the Colorado Plateau encompass some of the most spectacular scenery on Earth. Extending across the Four Corners region where the borders of Utah, Colorado, New Mexico, and Arizona meet, high deserts with a scattering of forests cover the plateau. The landscape is sculpted into dramatic cliffs and arches, domes and towers, fins and hoodoos, mesas and buttes, slot canyons, and deeply carved canyons. Most of the rocks are sedimentary types in various shades of red, orange, yellow, tan, brown, purple, and green; they include shale, sandstone, limestone, and conglomerates. I’ve been drawn to this region since reading works by Edward Abbey back in my early college years. It is a wonderland for those who appreciate rocks and rugged natural landscapes. 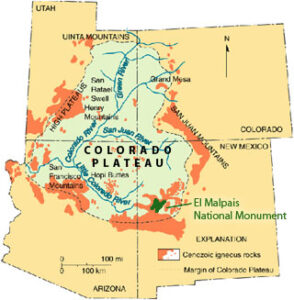 The terms red rock and slickrock are often used for this territory. The striking reddish hue of many of the sandstone units, formed by oxidized iron, is clearly the source of the red rock name. Those and other sandstones, of all colors, are also notable for their fine-grained and smooth surfaces, hence the name slickrock. This name can be traced back either to cowboys, who found that the iron shoes of their horses slipped on the weathered sandstone, or even farther back to the pioneers who despaired when the iron-rimmed wheels of their wagons slipped. Hikers and mountain bikers are well aware of the slickrock – especially when the rock is wet. 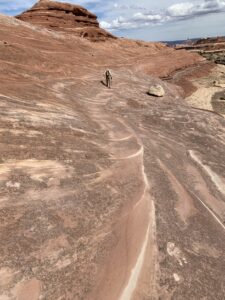 The exceptional beauty of the region is recognized in the nine national parks and 18 national monuments on the Colorado Plateau (the greatest concentration of US National Park units outside of the Washington DC metropolitan area). I’ve had the good fortunate to visit many of these special places, and the photographs in this post are from some of my trips. They are far from being of professional quality, but provide glimpses of some of the impressive features of the region. 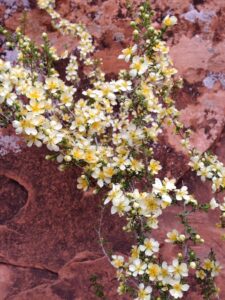 The Grand Canyon is located near the southwest border of the plateau, and the extraordinary record of rocks displayed in that deep canyon can tell us much about the early geologic history of the region. Above the canyon and across the plateau, rock layers are arranged in a giant staircase fashion, with the oldest rocks progressively overlain by younger rocks.

The rocks found at the bottom of the Grand Canyon formed at least 1.7 billion years ago and are igneous (granites and pegmatites) and metamorphic rocks (schists, gneiss, and amphibolite). Above these basement rocks lies a thick sequence of sedimentary rocks, most of which were deposited beginning about 525 million years ago. During the Paleozoic (ending 248 million years ago) the region was close to or below sea level many times, and the sediments that formed the rocks we can see today were deposited in shallow seas and in deltas and river floodplains on coastal plains. 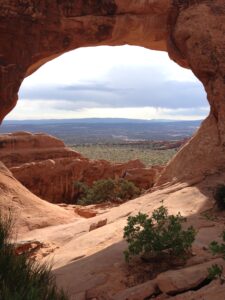 At the end of the Paleozoic and into the Mesozoic, the land rose to above sea level. Over millions of years, huge sand fields developed that were similar to the Sahara Desert today, with much of the sand originating from rivers that were draining from the Appalachian Mountains to the east. The sand dunes drifting back and forth across the landscape formed the dramatic cross-beds seen in many thick sandstone units, most notably the Navajo Sandstone.  On the western edge of the plateau, in Zion National Park, the Navajo Sandstone unit is more than 2,500 feet thick.  During the late Mesozoic, about 100 million years ago, ocean waters once again covered the region, leaving thick shale and mudstone beds. This shallow seaway extended from north to south across North America, and finally withdrew at the beginning of the Laramide orogeny approximately 70 million years ago.

The Laramide orogeny was a long period of deformation that folded and faulted much of the western US, including building the Rocky Mountains. Amazingly, most of the rocks on the Colorado Plateau region were relatively undisturbed. During the millions of years that the orogeny took place, the plateau was uplifted as a single huge block, possibly to elevations as much as 17,000 feet (today, most of the region is from 5,000 to 11,000 feet in elevation). During and following the Laramide orogeny, volcanoes erupted and igneous intrusions were emplaced, forming the Henry, La Sal, and other mountain ranges. Roughly 15 million years ago the Colorado Plateau block was tilted slightly to the west. New drainage patterns developed, including the Colorado River system that was established around 6 million years ago. The Grand Canyon was one of the youngest features to form in this system. Volcanism has continued for millions of years, mostly around the edges of the plateau. The most recent eruptions, at Sunset Crater north of Flagstaff, occurred about 900 years ago. 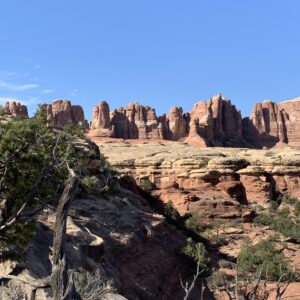 An excellent book to learn more about the origin of these rocks is Ancient Landscapes of the Colorado Plateau by Ron Blakely and Wayne Ranney. This book contains remarkable maps that show the landscapes of this region over hundreds of millions of years. In addition to beautiful photographs of the plateau, there are also photos of other modern environments – sand dunes along the coast of Namibia in southern Africa, lagoons in the Indian Ocean, and many others – that are representative of the ancient environments that created the rocks we can see today. 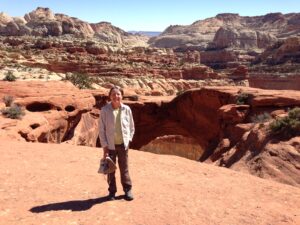 The photographs in this post are from Zion, Arches, Canyonlands and Capitol Reef national parks. I look forward to future trips, when I can roam through and admire the gorgeous landscapes of Red Rock Country.

May your trails be crooked, winding, lonesome, dangerous, leading to the most amazing view.

Blakey, R. and Ranney, W, 2008, Ancient Landscapes of the Colorado Plateau: Grand Canyon Association.  (IF you want to purchase this book, here is the publishers site which is the non-profit that supports the Park:  https://shop.grandcanyon.org/collections/books-geology-and-natural-history/products/ancient-landscapes-of-the-colorado-plateau )