Towering cliffs, plateaus, arches, and narrow canyons are iconic symbols of southern Utah’s Red Rock Country. Another type of landform captured my attention during recent explorations: mile after mile of gently rolling rock-covered terrain, giving the impression that one is surrounded by an ocean of sandstone. While hiking in such an area in the Escalante River region of Grand Staircase-Escalante National Monument, I found the enormous extent of these sandstone seas quite impressive. The environments in which they formed many millions of years ago were impressive, too.

The sand grains that we find in the Escalante region today originated far to the east in the Appalachian Mountains. These highlands rose around 450 million years ago and probably reached elevations of as much as about 14,000 feet (4,267 m). Over tens of millions of years, as weathering and erosion slowly broke the rocks down into fragments, softer minerals disappeared, leaving behind only hard quartz sand. Large rivers carried the sand westward, and a massive quantity gradually accumulated as rivers dumped their loads during the long journey across the continent. 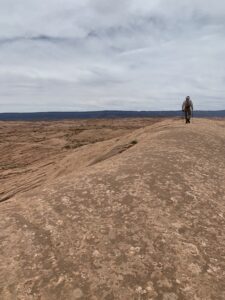 Picture the shifting sand dunes of the vast Sahara Desert that cover most of North Africa today. A similar desert extended across what is now the Southwestern US, including the Escalante region, beginning during the Jurassic roughly 200 million years ago. It was a time of extremely hot, dry, and windy weather. The combination of arid conditions, strong winds, and an abundant supply of sand created an enormous desert sand sea. Over the eons of being blown around this Jurassic desert, the sand grains became rounded, frosted, and of roughly the same fine-grained sizes. Sandstone formed when the particles were slowly cemented together by silica (silicon dioxide) and other minerals that moved through the sediments in groundwater. 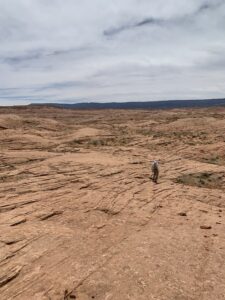 Until about 190 million years ago, the largest of these deserts was the environment where the Navajo Sandstone formation developed. A few tens of millions of years later, another enormous sand sea rolled across the Southwest, creating the Entrada Formation. The Escalante sandstone sea where I hiked is composed of both rock formations. Sedimentary rocks from those long-ago deserts hold many clues about the environmental conditions of the time. The unstable dune fields were largely devoid of life, but around the margins of the dunes, dinosaurs once wandered. Today, occasional sandy hollows where cactus have gained a foothold interrupt the vast expanses of bare rock. 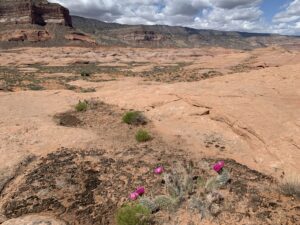 The Remarkable Hole in the Rock Road

The Escalante sandstone sea surrounds much of the region crossed by Hole in the Rock Road–an impressive 56 miles of unpaved road that extends from just east of the town of Escalante southward to the Colorado River. This modern route closely follows a historic trail built in 1879 by the extraordinary efforts of a group of Mormon trailblazers. Instructed by their leaders to cross the Colorado River and establish new settlements in southeastern-most Utah, the rugged landscape posed serious challenges to the builders.

Ultimately, they successfully carved out a route, using a narrow crevice called Hole in the Rock to drop down cliffs 1,200 feet (365 m) high to reach the Colorado River. By enlarging this natural crack with blasting powder and by chiseling anchor points for ropes into the rock, they managed to move 250 people, 83 wagons, and over 1000 head of livestock down the precipice to the river. A ferry carried the wagons across the water, where the rough route continued. Today, Lake Powell has encroached on the river crossing that was used. Peering from the top of the crevice down to the water far below, the tremendous efforts and determination of these hardy pioneers awed me. 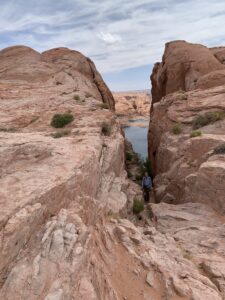 Hole in the Rock with Lake Powell in the background

Hole in the Rock Road roughly parallels the edge of an impressive high plateau, a landform aptly named the Straight Cliffs, or Fiftymile Mountain. These steep cliffs are the eastern margin of the enormous Kaiparowits Plateau and formed by Jurassic and Cretaceous rocks. The youngest rocks are composed of sediments deposited along the western edge of the Interior Seaway, which extended through the middle of the North American continent until finally withdrawing about 68 million years ago. The sandbars and barrier islands built along a straight shoreline of this seaway happen to be quite resistant to erosion, and today they create the Straight Cliffs. (I have a special fondness for the Interior Seaway, as I studied equivalent late Cretaceous rocks in central Wyoming for my graduate research).

In the recent drive along Hole in the Rock Road, the northern reaches of the route were gravel covered with a bone-jarring washboard-surface. Junipers and sage are established in many areas along the northern section. To the south, the sandstone sea extends across the landscape and the road is rocky, rutted and rough. We explored this region for five days, hiking for miles through the sandstone each day and finding informal, or “disbursed”, places to camp each night. The sandstone seas by day and the sea of stars on the dark nights make this an enchanting place. 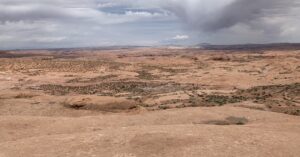 “I have loved the red rocks, the twisted trees, the red sand blowing in the wind, the slow, sunny clouds crossing the sky, the shafts of moonlight on my bed at night. I have seemed to be at one with the world.”   Everett Ruess

My photos in the Grand Staircase-Escalante National Monument, May 2021