One of the most spectacular mountain ranges on Earth is the Cordillera Huayhuash in northern Peru. These mountains were also the setting for Touching the Void, the title of both a book and movie about a disastrous 1985 mountaineering expedition. Years ago I stared down in awe at the jagged mountains of the Cordillera Huayhuash, sparkling in the sunlight, during a flight from Lima to Huaraz – it was an extraordinary and unforgettable sight. The story behind Touching the Void is also extraordinary and unforgettable. And recently I’ve been pondering the connections between remarkable human experiences and exceptional landscapes. 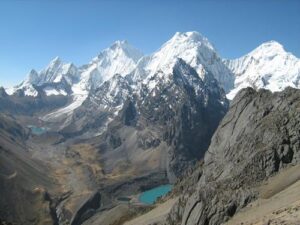 The Cordillera Huayhuash is a compact and distinctive cluster of high peaks about 18 miles in diameter. It is a southern extension of the Cordillera Blanca, the most extensive tropical ice-covered mountain range on Earth (thus the name “white”). Both ranges are close to the equator — within just 10 degrees south. The towering peaks within the Cordillera Blanca and Cordillera Huayhuash straddle the crest of the Andes and define the drainage divide between the the rivers that drain to the Pacific Ocean and the headwaters of the Amazon River on the east.

The heights of the peaks in both mountain chains extend well above those in other Andean ranges. Enormous Huascaran, in the northern Cordillera Blanca, soars to a height of 22,205 feet (6,768 m) and is the tallest mountain in Peru.  In the Cordillera Huayhuash, the unusual circular shape of the range is emphasized by the two highest mountains with prominent locations in the center of the range: Yerupaja (21,768 feet/6635 m; the second highest mountain in Peru) and Siula Grande (20,814 feet/6344 m).  A constellation of lower peaks, most in the 18,000 to 19,000 foot elevation range, surround the two high peaks.

In the Cordillera Huayhuash, snow covers the steep slopes of the mountains and ice fields extend out across the lower elevations below. Deep canyons have been cut by rivers and valleys scraped out by glaciers, with dozens of glittering blue lakes filled with glacial water. Bedrock in the Cordillera Huayhuash is mostly complexly folded Mesozoic (Cretaceous) marine sedimentary rock, overlain by mid-Tertiary volcanic rocks, with granitic plutons that were intruded in the late-Tertiary (Miocene). 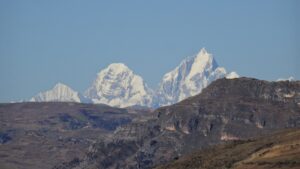 Both the Cordillera Blanca and Cordillera Huayhuash are popular destinations for trekkers and mountaineers. Virtually all of the Cordillera Blanca area above about 13,000 feet (4000 m) is encompassed by Huascaran National Park, established in 1975 to protect archaeological remains and the distinctive and endangered flora and fauna, as well as to promote tourism and encourage scientific research.  The park was named as a UNESCO World Heritage Site in 1985. The Cordillera Huayhuash has a patchwork of community-led private conservation areas. The valuable mineral resources found in this region, as well as an increasing amount of tourism, have led to disagreements over protection measures.

In 2006, I trekked for ten days through the majestic landscapes of the Cordillera Blanca, fulfilling a long-held dream. For seven days in a row we hiked over passes of 15,000 feet in elevation and higher – it was as exhilarating as it was exhausting. The Huayhuash Circuit, a 100 mile loop that encircles that range, reportedly takes 12 to 14 days to complete and is considered one of the finest trekking routes in the world.  I’d love to visit this region and hike along this circuit; in the meantime, I’m grateful I was able to see these impressive mountains from above.

The second highest Cordillera Huayhuash peak, Siula Grande, is renowned as the setting of the epic tale of survival, Touching the Void, by mountaineer Joe Simpson.  In 1985 Simpson, then age 25, and his climbing partner, Simon Yates, age 21, were two Brits who had climbed in the Alps, and then visited Peru for the first time. The two set their sights on the remote and previously unclimbed West Face of Siula Grande. After a difficult multi-day climb, they were successful in their efforts and stood triumphantly on the summit.

Descending along the North Ridge, they were caught in a raging storm with white-out conditions, when Simpson fell and shattered his leg. Very bad news; possibly, a death sentence. Then, for hours into the night, Yates lowered Simpson down the mountain by rope, even as he himself was barely anchored in the loose powder snow on alarmingly steep slopes. At some point during the storm Yates lost contact with Simpson, who had become suspended in mid-air beneath an overhang, and was unable to move up or down. After several hours, fearing Simpson was dead and to save his own life, Yates cut the rope that held the two of them together. The next day, alone, exhausted, and convinced that Simpson had not survived, Yates returned to their base camp to recover.

Miraculously, Simpson was alive but had fallen an estimated 150 feet onto a shelf in a deep crevasse, or crack, on the steep mountain glacier. After a period of utter despair and hopelessness, Simpson used the length of cut rope to lower himself downward into the dark and unknown depths of the crevasse. Incredibly, he managed to emerge through an opening near the base of the mountain. Still miles away from the base camp, Simpson spent the next three days and nights crawling and hopping in excruciating pain across ice and then rock fields with a broken leg, frostbite, severe dehydration, and multiple other injuries. Barely surviving this ordeal, he managed to crawl into the remote base camp only hours before Yates was planning to leave.

Subsequently, Simpson endured numerous surgeries, but recovered and was able to climb again. Yates received fierce criticism from the mountaineering community for cutting the rope, although Simpson staunchly defended his partner and his actions. Yates subsequently returned to the Cordillera Huayhuash to climb other peaks. 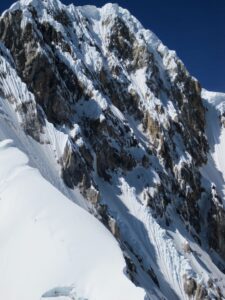 Two years later, Simpson published a book about the experience: Touching the Void (1987). Several filmmakers, including Werner Herzog and the company Cruise-Wagner, associated with Tom Cruise, wanted to make a movie from the book and either owned or sought the film rights. Finally, Oscar-winning documentary-maker Kevin Macdonald began work on the film in 2001.  He resolved to combine documentary and dramatic techniques, incorporating interviews with Yates, Simpson, and a third person who had been staying at the basecamp – and then film the compelling story with actors. The plan involved shooting some of the film on Siula Grande and then the segments involving actors in the European Alps.

After the interviews were completed, director Macdonald, a film crew, plus Yates and Simpson returned to Siula Grande in 2002 to film distant and wide angle shots on the mountain. (Yates and Simpson “doubled” as themselves in these shots.) Over the weeks of filming, both Yates and Simpson descended into the darkness of their memories, with Simpson experiencing flashbacks and panic attacks and Yates erupting in aggressive and threatening episodes of anger. By the end of filming, Macdonald has said, neither man would barely speak to him. Clearly, the demons left by the horrifying experience in 1985 were still present.

The film is visually stunning and the tense drama throughout is riveting. Filmed in the spectacular scenery of the Cordillera Huayhuash, and then in freezing blizzards and deep crevasses in the Alps, it is a superb docudrama that has won many awards.

The series of events that unfolded on Siula Grande were extraordinary. The extremely close brushes with death of both Simpson and Yates are astounding. That both survived – and eventually continued mountain climbing – is amazing.

In a completely different realm – the geologic history that created the majestic mountains of the Cordillera Huayhuash and Cordillera Blanca (as well as the entire 4,000 mile long Andes chain) is also extraordinary. It is a complex and fascinating history, something I have been reading about for many years, and writing about in the drafts of my current book-in-progress, The Monumental Andes.

Also remarkable are the geologic processes that created fabulous Yosemite Valley and the formidable granite wall of El Capitan, where the legendary climb of Alex Honnold was documented in the movie Free Solo. In both mountainous regions, amazing and exceptional events created dramatic landscapes, in turn, setting the stage for extraordinary human experiences.

What a marvelous planet we live on!

If you don’t make decisions, you’re stuffed. – Joe Simpson, in Touching The Void 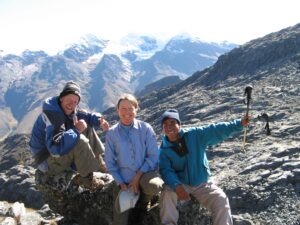 Photo of peaks of the Siula Grande and Yerupajá, June 2018 by Waterloo 1883: https://commons.wikimedia.org/wiki/File:Cordillera_Huayhuash_09307.jpg

Photo of the west face of Siula Grande, taken from the col between Siula Grande and Yerupaja, Cordillera Huayhuash, June 2010 by Jeremyfrimer: https://commons.wikimedia.org/wiki/File:Siula_Grande_West_Face.jpg