Uluru, also called Ayers Rock, the iconic giant sandstone mound in Australia that rises abruptly out of a vast expanse of flat desert, has always intrigued me. For thousands of years the indigenous Australians have considered Uluru a sacred site, and it is the focus of numerous myths and legends. I understand that mythic attraction – and the geologic history is just as captivating.

Geologists call prominent and isolated hills like Uluru inselbergs – “island mountains”.  Standing 1,142 feet high, Uluru is a steep sided and almost completely bare outcrop of rock – and to encircle the perimeter you would need to walk 5.8 miles. Weathering of minerals and rock fragments has released iron oxides (essentially, rust) that give the outer rock surface the rich reddish brown color; the un-weathered rock beneath is light to dark gray. 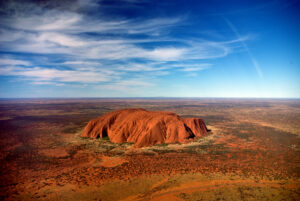 Uluru has a tremendously long history, beginning some 550 million years ago, when the only life forms on Earth were bizarre types slowly gaining a foothold in the vast oceans (the Ediacaran Biota). On land now recognized as Australia, a large mountain range rose composed of granitic rocks. With no plants or soil to protect the rock, these mountains weathered rapidly from wind, water, and chemical processes. Eroded sediments washed downhill onto a huge alluvial fan. Thin horizontal layers of sediment accumulated over millennia, eventually solidifying into thousands of vertical feet of rock, formally known as the Mutitjulu Arkose (average composition 50% feldspar, 25-35% quartz, up to 25% rock fragments).

Fast forward about one hundred million years, and tectonic deformation tilted the formerly flat lying sediment beds into the almost vertical position seen today, and then deeply buried the rock in younger sediments. More time passed and the rocks were folded, faulted and uplifted above sea level. During all these millions of years, Uluru managed to escape the fracturing breaking up the surrounding rocks. (Credit goes to the high degree of homogeneity and structural integrity of the outcrop, largely a result of fairly uniform grain sizes.)

Eons of exposure to the elements are sculpting Uluru. Flaking dominates, in which small patches of surface rock spall off from expansion related to hydration of iron-rich minerals. Sheets of rock are also peeling away from the rock mass, parallel to surface topography, releasing the high pressures the rock experienced when deeply buried. (Sheeting, or exfoliation, is also common in granitic rocks; you’ve probably seen this if you’ve wandered through the Sierra Nevada.) 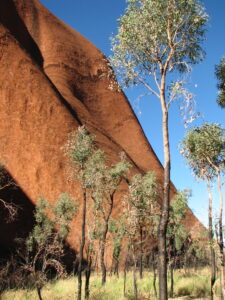 Uluru is protected within the Uluru-Kata Tjuta National Park. (Kata Tjuta or The Olgas, a series of large bedrock mounds, is another major landmark.) When the park was designated as a UNESCO World Heritage Site in 1987, many tourists began climbing to the top of Uluru, hanging onto a chain attached to one of the gentler slopes. The chain was removed, and climbing was prohibited in October 2019. Fine with me – if/when I get to this famous landmark, I’ll be happy to admire its majestic presence from a distance.

Via the link below, you can see some beautiful photos of Uluru, plus explanations of the geology and ancient rock art, courtesy of Wayne Ranney. As a geologist based in Flagstaff, Wayne has studied Southwest geology for decades, and has been a tour guide and traveler on many continents.  The author of several books, he is also co-author of the fabulous Ancient Landscapes of the Colorado Plateau – one of my favorite books. Wayne’s website:  http://www.wayneranney.com/  and his Earthly Musings blog site have lots of interesting content – check them out. 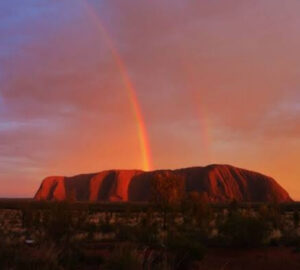