The volcano recently erupting in Africa–Mount Nyiragongo–is one of the most active volcanoes on our planet. Eruptions in 1977, 2002 and now beginning May 22, 2021 have resulted in a significant number of fatalities. The densely populated city of Goma, only a few miles south of the erupting volcano, is directly within a path that lava flows have been taking, making the city an extremely dangerous place. If scientists were calling the shots, they would relocate Goma immediately and they would designate the region at the foot of this active volcano a national park. 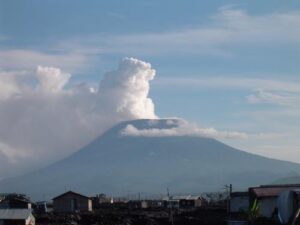 Goma with a view of Nyiragongo in the background

Mount Nyiragongo is within the East African Rift, a zone of tectonic activity that will eventually break apart the African continent. Besides interesting geologic and sociologic elements, fabulous fossils have been found in the rift. Maybe you already know this? (If not, here’s a hint: Olduvai Gorge.) More on all these topics, below.

Tectonic plates break apart along rifts, where molten material from deep inside the earth travels upwards and boils out onto the surface. Most rifts, or spreading centers, are forming beneath the oceans. Some are on land, such as the Rio Grande rift in the Western US (a topic of my recent post, here: https://roseannechambers.com/rifts-and-the-rio-grande/). Why the East African Rift, which extends for most of the continent and contains two branches, is opening is uncertain and a topic of scientific debate. There may be a “super-plume” upwelling from the lower mantle and feeding smaller plumes in the upper mantle.

Slashing a continent apart takes millions of years and is accompanied by extensive faulting and violent volcanic eruptions. The extensional forces separating tectonic plates create rift valleys, depressions frequently filled by lakes. Mount Nyiragongo is part of the Virunga chain of eight major volcanoes aligned along the western branch of the East African Rift and bordering the Democratic Republic of the Congo, Rwanda, and Uganda. Most of the large volcanoes in the Virunga chain are dormant, except for Mount Nyiragongo and Mount Nyamuragira, about 8 miles and 16 miles (13 and 26 km) to the north of Lake Kivu, respectively. These two volcanoes are responsible for about 40 percent of the historical volcanic eruptions in Africa. On the map below, Mount Nyiragongo is shown in the western branch of the Rift, to the west of the southern edge of Lake Victoria. 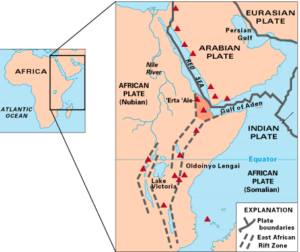 Mount Nyiragongo is an exceedingly dangerous volcano for many reasons. The first is the unusually steep shape of the volcano, especially near the summit which reaches an elevation of about 11,400 feet (3,470 m). Then, on this summit, the steep cone encompasses a large lava-filled lake. This lake has been feeding the recent eruptions, which begin when the lava breaks through the sides of the cone. The flanks of the mountain are also riddled with rifts, or fractures, that release lava during eruptions. There is a clear danger of a volcano side collapsing, which could have catastrophic consequences. Finally, Nyiragongo has an unusual type of highly liquid lava that can move quickly and without warning during eruptions. The steepness of the cone compounds the danger of extreme lava flow speed. 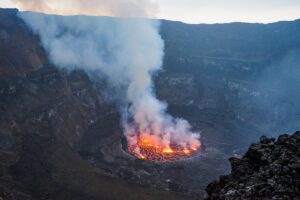 View into the lava lake at Nyiragongo

The map also shows the general area of the Rwenzori Mountains, in the rift zone to the west of the northern part of Lake Victoria. These are most likely the legendary Mountains of the Moon, enveloped in the mists of history when early European explorers proposed this region as the assumed source of the Nile River (topic of my blog post here: https://roseannechambers.com/mountains-of-the-moon-in-africa/).

The East African Rift has been the stomping grounds of anthropologists for decades. Beginning with the work of Richard and Mary Leakey and continuing with Tim White, Donald Johanson, and many others — and from the Afar region in Ethiopia to Olduvai Gorge in Tanzania — numerous valuable hominid fossils have been found. Fossil preservation occurs under only rare conditions, so why are so many found in the rift? Tectonic activity over the past millions of years has been creating rapidly rising highlands, which then erode, washing sediments down to fill adjacent deep depressions. The sediments quickly covered and preserved the remains of many ancient life forms, including early hominids. And we can find them in the rift today because of the vagaries of plate tectonics. Fascinating!

A Dangerous and Doomed Domain

The city of Goma is hemmed in by the border with Rwanda on the east and by Lake Kivu on the south. Therefore, this rapidly growing city is expanding to the north toward Mount Nyiragongo and west, along the shore of Lake Kivu. And these regions are within the path of lava that has flowed south during the three major eruptions of Nyiragongo in the past 50 years.

Goma has a population estimated at over one million inhabitants. Many are extremely poor, in a country that civil war, ethnic conflicts, and corruption have wracked for decades. Ironically, the Democratic Republic of the Congo has vast mineral wealth. The country is a major producer of cobalt ore, copper ore and diamonds, but the riches are currently going to only a few. Most Congolese are among the poorest on the planet and roughly two-thirds of the population suffers from malnutrition. 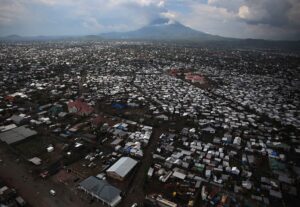 Goma with a view of Nyiragongo in the background

An eruption of Nyiragongo in 2002 resulted in hundreds of fatalities, an estimated 120,000 homeless and about 13% of the city (roughly 1.8 square miles, or 4.7 km2) covered by fresh lava. Population pressure since that eruption has led to houses and roads being built on unoccupied land–regrettably, these are the 2002 lava flows that cooled only recently.

In the eruption that began the evening of May 22, 2021, lava in the summit lake broke through the crater wall. Since the eruption was not being fed from a magma chamber, there were few earthquakes to provide warning of the imminent eruption. A red glow appeared on the horizon. Lava raced down toward Lake Kivu, and homes and people began to be engulfed just as evacuations were starting.

In late May 2021, extremely concerning are the numerous ongoing earthquakes, extending along a trend from Nyiragongo’s summit area south to Lake Kivu, crossing the city. In different parts of Goma, cracks that can be a foot (300 cm) in width and 1,000 feet or more (300 m) in length have been opening up and emitting gas and even flames. Scientists are associating the earthquakes and fractures with a north-south trending volcanic dike carrying lava beneath Goma, and most likely extending into Lake Kivu. This dike activity appeared to be ending, but for how long?

And that isn’t all. Lake Kivu presents additional hazards. Volcanic activity in the region has led to a buildup of methane and carbon dioxide in the deepest parts of the lake, which reaches depths of about 1,500 feet (457 m). If–or more likely, when–earthquakes or other forces destabilize the layers of water, it could release this gas, enveloping anyone unlucky enough to be in the vicinity in toxic and suffocating clouds of gas.

Clearly, Goma is in a highly unstable and dangerous location.

The streams of people evacuating from the city during the recent eruption of Nyiragongo–many on foot and carrying their possessions–provides a grim view of what lies ahead. Mother Nature is spinning her roulette wheel. And eventually, the number for a powerful volcanic eruption is going to come up.

Albert, 2021, “Goma: How to Live with Nyiragongo” in Volcano Café blog post on May 26, 2021. https://www.volcanocafe.org/goma-how-to-live-with-nyiragonga/  (NOTE: this is an excellent post; check it out for more information)

Photo of Nyiragongo from Goma by Radio Okapi, 2006. https://commons.wikimedia.org/wiki/File:Nyiragongo_vue_de_Goma,_2006.jpg

Map of East Africa showing some of the historically active volcanoes(red triangles) and the Afar Triangle (shaded, center) — a so-called triple junction (or triple point), where three plates are pulling away from one another along the East African Rift Zone by USGS, 1999. https://en.wikipedia.org/wiki/East_African_Rift#/media/File:EAfrica.png