Windows into the Past

Windows into the Past

The granite and obsidian described in my previous posts aren’t the only rocks I admire. My favorites are sedimentary types. I promise they’re more interesting than they sound. During exposure to wind and water even the hardest rocks eventually crumble into fragments. Carried into rivers, lakes and oceans, these fragments settle into layers and are gradually cemented into sandstone and mudstone. Swampy plant debris, dead dinosaur parts, and other delightful organic tidbits can accumulate and solidify into sedimentary rocks. They are literally a paper-mache of life, glued together into stone. Pretty nice. 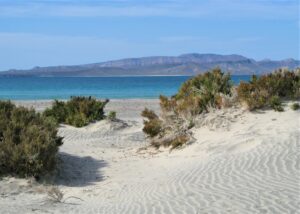 Sedimentary rocks record the environments where they formed. For my graduate research, I studied some rock outcrops in Wyoming that show the withdrawal of an ancient seaway that once extended through the middle of North America. I could walk for a thousand feet or so and trace the locations of the ancient sea from its shallow areas all the way into deep water, since the rocks have been folded upwards and are exposed at a steep angle.  Looking out across the high desert landscape of scattered rock and sage brush, I would try to imagine the sandy beach and sparkling blue water that once covered the region, filled with clams and snails, and in deeper waters fish, sharks, and ammonites, my favorite fossils. (Ammonites are extinct relatives of the coiled Nautilus sp. that cruise through cold and deep ocean water today.) 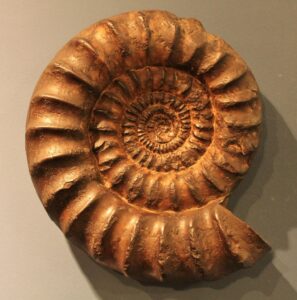 I would start walking in coal-bearing rocks (approximately 67 million years old, so dinosaurs were still roaming the region), initially deposited slightly inland of what was once the ocean shoreline. Formed in ancient swamps and lagoons, these dark coals are now conveniently (for geologists) carried to the surface by gophers and other burrowing critters. Wading onto the former beach, I would find sandstones with ripple marks left by the wave action of ancient currents, fossil oyster shells, and the tube-shaped feeding and dwelling burrows of extinct marine invertebrates. Drifting into deeper water offshore, layers of fine silt and clay appear, occasionally revealing the spiral shells of ammonites. 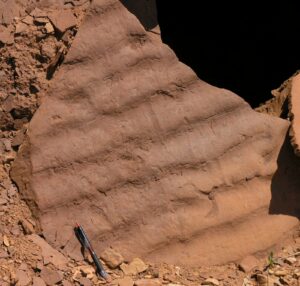 The ancient marine creatures we find entombed in rocks today once flourished only in water having specific temperatures, sedimentation rates, and wave intensity conditions. Combining rock and fossil clues with only a small amount of imagination provides a window to landscapes that existed millions of years ago.

Sedimentary rocks with huge numbers of dinosaur footprints are found on the 12,000 foot high plateau that spans southern Peru and northern Bolivia. One area in Bolivia has so many tracks in random patterns that it is known as a “dinosaur dance floor”.   In the high peaks of the Cordillera Blanca in northern Peru, I admired marine invertebrate fossils that are now exposed at elevations of 15,000 feet and higher. I’d love to know what the ancient Andeans thought when they saw these gigantic tracks and the shells of creatures that clearly once inhabited ocean waters, now all revealed high in the mountains.

In the confrontation between the stream and the rock,

not through strength but by perseverance.

My photo: ripple marks from wind in Baja Mexico

Ammonite: Image by cocoparisienne from Pixabay