Granitic rocks form the backdrop of iconic landscapes worldwide. Picture the narrow ridge where the Incas built Machu Picchu – or the massive wall of El Capitan navigated by rock climbers in Yosemite Valley–or majestic Mont Blanc, towering over the border between France and Italy. I recently visited another area of fascinating granites—City of Rocks National Reserve in southern Idaho–with sculpted rock outcrops in shapes of spires, loaves, and domes. Collectively known as pinnacles and scattered over a region that reminds me of a sculpture garden, these rocks have a different appearance from other granites that are more familiar. Interestingly, even arches are formed by these granitic rocks, something that is more typical of the sandstones found in Arches National Park and surrounding areas in the American Southwest. 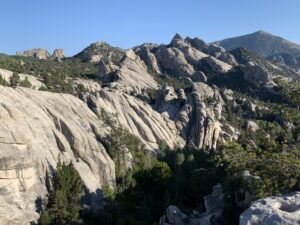 Thousands of people have admired the City of Rocks, including pioneers in wagon trains who passed through the region on the California Trail. This route was established beginning in 1843 and reached a peak in usage during 1852, when some 52,000 people followed the trail westward toward new lands and the possible riches of the California Gold Rush that began in 1848. Many travelers recorded diary entries about the fantastic shapes of the rock pinnacles–they had seen nothing like these rocks before.

I’ve been fortunate to see many beautiful granites in my lifetime, and I was curious why City of Rocks pinnacles looked so different. It turns out that the processes that formed these features are unlike those that shaped most other granites. The unique geologic history of the region has also produced two similarly shaped “sisters” of rocks, which appear to be alike, but are separated by an enormous span of Earth’s history. I’ll get to that remarkable difference below. 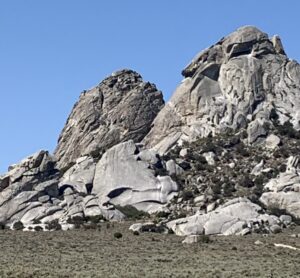 Twin Sisters in the City of Rocks – view towards the southeast

How to Shape Granitic Rocks

We find the famous granites mentioned above in mountain ranges–the Andes Mountains of Peru, the Sierra Nevada of California, and the Alps of Europe. All had a similar origin. Granitic rocks develop from enormous pools of hot magma that accumulate deep underground, and then cool into what we call plutons or batholiths. The long and slow cooling history creates the distinct crystals of quartz, mica, feldspar, and other minerals that give these rocks their characteristic appearance. Over millions of years, the tectonic processes that build mountains uplifted and exposed the granitic rocks, where the relentless weathering forces of rainwater and ice carved them into majestic, rugged forms.

The geologic history of the City of Rocks pinnacles is different. Deep weathering of the rock produced these unusual shapes while the granite was still buried underground–that is, the rocks were sculpted entirely without ice or wind. How could this happen? A tectonic history of extensive folding and faulting of the rock produced numerous sets of joints, or fractures, that are widely distributed in the rocks and control the general form of the City of Rocks outcrops. The pinnacles developed in three stages:

2nd – water percolating from the ground surface moved downward along the joints and chemical weathering, including shrinking and swelling of some minerals and the action of mild acids, weakened the surrounding rock, leaving resistant cores of granite

3rd – tectonic forces pushed the rocks upward, where wind and water removed the overlying soil and the disintegrated rock debris surrounding the resistant rock cores, exposing the pinnacles that we can see today

The marvelous natural arches developed in the granite when water moved into weak spots in the rock, raising the moisture content and enhancing disintegration to produce alcoves and hollowed out areas. This is known as tafoni, or cavernous weathering, and is also commonly seen in sandstones. 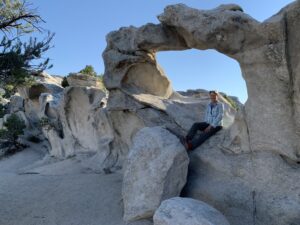 Granitic rocks are superior climbing rocks, and the City of Rocks is no exception, with hundreds of climbing routes mapped in the region. While hiking in the Reserve, we saw many climbers scaling high walls and standing triumphantly on the tops of tall pinnacles, some of which extend to heights of as much as 600 feet tall. (More about granites and rock climbing in my post: Granite – “Free Solo” Best Supporting Rock.) 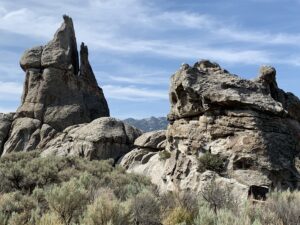 A Very Short Summary of a Very Long Geologic History

The City of Rocks developed in the Basin and Range Province where extensional forces are stretching and pulling apart the Earth’s crust. Over tens of millions of years, these forces pushed rocks near the surface towards the east and west along large, low-angle detachment faults.  As rocks were stripped away, a broad dome developed from the more deeply buried rock. Deeply buried and ancient rocks were thus moved up to the ground surface.

In the Albion Mountains surrounding the City of Rocks, these processes “unroofed” rocks that were originally at depths of 9 miles (14 km). Heat generated by the intrusion of younger plutons further weakened the crust and facilitated crustal thinning. And eventually, after the pinnacles of granitic rocks were shaped deep underground, they were exposed at the surface. 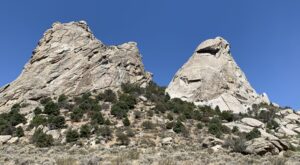 Twin Sisters in the City of Rocks – view towards the north

Twin Sisters–Separated by an Immense Stretch of Time

A unique set of towers in the City of Rocks are known as the Twin Sisters–they are two tall cone-shaped outcrops that are similar in appearance but have vastly different ages. The chemical composition of the two is comparable, but the much older rock has been partially metamorphosed into a type of rock called granitic gneiss. The taller, light-gray-colored spire is composed of 29-million-year-old granite, and the darker, brownish-colored, and more strongly fractured spire is composed of rock that is 2.5 billion years old. These extremely ancient rocks developed when conditions on our planet were still quite hostile and an oxygen-rich atmospheric that could support life was just developing; they are among the oldest rocks found on the continent. The sequence of events that unfolded to bring these two spires into adjacent positions and similar shapes is almost incomprehensible. In 2 billion years, lots can happen! We live on an amazing planet.

My photos from City of Rocks National Reserve, August 2021

Miller, D.M., Armstrong, R.L., Bedford, D.R. and Davis, M., 2008. Geologic map and digital data base of the Almo quadrangle and City of Rocks National Reserve, Cassia County, Idaho. US Department of the Interior, US Geological Survey.