Squeaky guinea pigs, also known as cuys, are native to the Andes Mountains. These small rodents were domesticated as a supplemental meat source, but also had important roles in the religious and social practices of the ancient Andeans. They were consumed for special meals, given as gifts, used as sacrificial offerings in rituals, and had a role in traditional healing rituals. Archaeological evidence of the early penning of guinea pig indicates they may have been domesticated as far back as 6,500 to 8,000 years ago. 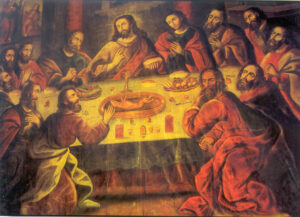 The cultural importance of guinea pigs in the Andes is highlighted by an unusual painting hanging today in the Cusco Cathedral on the main plaza in Cusco, Peru. In 1753 the artist, Marcos Zapata, painted a scene of the Last Supper with a cuy, legs in the air, served elegantly to Jesus Christ and his disciples. The cuy is accompanied by glasses of chicha, a fermented alcoholic beverage that also has a long history of cultural importance in the Andes. Instead of the traditional bread and wine, as shown in Leonardo da Vinci’s classic painting, the indigenous (Quechua) Peruvian Zapata wanted to show the ceremonial foods of his homeland. It is surprising that this painting was tolerated by the Catholic church and still survives today.  Marcos Zapata was a prolific painter of religious subjects, so perhaps his pious reputation played a role? 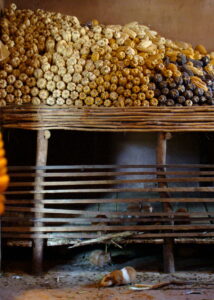 Guinea pigs can conveniently live in free-range style alongside people in their homes. They are happy to eat vegetable scraps, and they reproduce quickly. These traits contribute to their being a small, but otherwise ideal, livestock alternative. European explorers and traders brought them to Europe in the 16th century, where they rapidly became the exotic pets of royalty.

Guinea pigs continue to be an important part of Andean culture today. They provide a source of income and protein to the diets of many in Peru and Bolivia, particularly in the Andean highlands. They are on the menu of restaurants in Cusco, where I sampled one (IMO: tastes like chicken). Guinea pigs also continue to play a role in eclectic religious events that are a mix of ancient practices and Catholicism. Guinea pig festivals are reportedly held in cities throughout Peru, and there is even a National Guinea Pig Day on the 2nd Friday of October. We missed out  this year – but you could always keep it in mind for another year.