I was finally on my way to the Inca citadel of Machu Picchu, fulfilling a longtime dream to see the Andes Mountains and the archaeological wonders of Peru. While hiking along the steep paths and long flights of stairs on the “Classic” section of the Inca Trail, I pondered the Incas and their ancestors who had thrived in these rugged mountains. The ancient roads and trails I was following had once been used by huge caravans of nimble llamas with their soft footpads and armies of soldiers with feet clad in fiber sandals. Today, hikers like me in boots with Vibram soles, and local porters in sandals with tire tread soles, are using the trails on treks that reach ancient ruins.

Later that night while camping, I became wretchedly ill with a gastro-intestinal upset. Not good. At all. I’d been as careful as I could be to stay healthy, but the frequently sketchy sanitation of rural Peru had clearly caught up with me. The only positive part of that night: admiring a spectacular display of sparkling stars splashed across the sky when I needed to leave my tent. 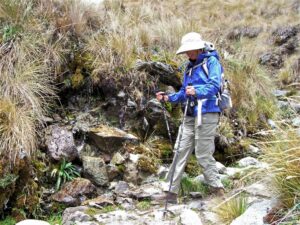 The next day will be etched in my memory forever. We faced the most difficult hike of the 4-day trek to Machu Picchu, including crossing the 13,780 foot elevation Dead Woman Pass (Abra de Huarmihuanusca). This name was a remarkably – and unpleasantly — close approximation to how I was feeling. After my almost sleepless night, our group hiked across not one but two high passes on the mountainous route, separated by a steep descent of more than 2,600 feet. I didn’t have a Fitbit activity tracker back then, but if I had I expect I climbed somewhere around 500 staircases. It was a very long day. 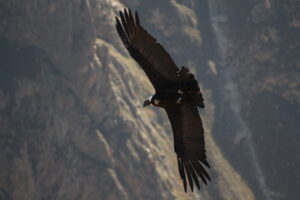 During my frequent stops along the trail, I morosely watched Andean condors soaring above the mountains, close relatives of scavenging vultures and the largest land birds in the Americas. Our Peruvian guide kept encouraging me onward; in the afternoon he carried my “luggage” (day pack) and waited patiently whenever I rested. Midway through that long and miserable day, the guide told me I had a “strong wheel”.  “Wheel?” I pondered in my dazed and exhausted state – finally understanding that he meant a strong will. Yes, I did have a strong will, but then, I certainly did not want to squander the months of training and anticipation I had undertaken for this trip, much less to be a meal for an Andean condor. And so, I stumbled on, following the ancient trail towards Machu Picchu.

Overall, my trip to Peru was outstanding (despite some very low moments)! And what memorable adventures have you had while traveling in an exotic place? I’d love to hear about them. 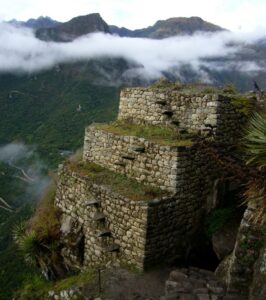 My photo of Huayna Picchu