Can you think of an animal living today whose relatives, some of them gigantic, ruled the seas for hundreds of millions of years – but then became extinct along with the dinosaurs? This survivor, the chambered nautilus (Nautilus pompilius), is little changed from ancestors that flourished more than 400 million years ago. Relatives of the nautilus include the ammonites, a large group of marine creatures that evolved a remarkably wide range of shell types and sizes. With straight through coiled, and small to huge shells, an especially large type in a museum reconstruction has been described as “something like a giant octopus crammed into a bus-sized ice cream cone.”*

Ammonites were cephalopods, a group that today includes the octopus – the “intelligent aliens” in our world — as well as squid and cuttlefish. Cephalopods diverged from the evolutionary line leading to dinosaurs and mammals about 600 million years ago. They are a subgroup of mollusks, a group that initially became successful after acquiring hard shells for protection – an important early adaptation when they found themselves surrounded by sea creatures who wanted to eat them. 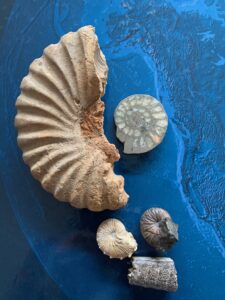 The line leading to ammonites and the nautilus likely began from an early mollusk with a cup-like shell, like the limpets that line tide pools today. Over great expanses of time, the shells took on the shape of a horn, and the animal beneath developed a muscular “foot” so they could crawl along the seafloor. Eventually, the shell became buoyant with a small amount of gas in a series of chambers, allowing a rise into the water column and opening up many more dining opportunities. The “foot” was no longer needed, so part of it evolved into a cluster of tentacles and a tube-like siphon used to direct water flow for jet propulsion. Voilà – ammonites became skilled hunters and they were remarkably successful. From tiny jobs to coiled shells of 6 feet or more in diameter, and straight shells up to 20 feet long, they dominated the seas for several hundred million years.

Nautilus-types have changed little over time, but by surviving up until modern days, their persistence made them successful. In contrast, all the ammonites became unlucky and died out in the End-Cretaceous mass extinction – the event best known for finishing off the dinosaurs, as well as about three-quarters of all the other plants and animals on the Earth. Of the cephalopods with external shells, only the nautilus survived – possibly because of a distinctive reproductive habit of leaving small caches of eggs in many places on the seafloor. Sadly, the nautilus now appears to be teetering on the brink of extinction.  The beautiful chambered shells of this creature unfortunately make them targets — nautilus are being harvested from Pacific atolls at alarming rates for international sales of their shells. A bleak ending is in view for a fascinating line of animals. 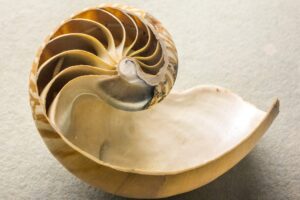 *Brannen, Peter, 2017, The Ends of the World – Volcanic Apocalypses, Lethal Oceans, and Our Quest to Understand Earth’s Past Mass Extinctions, HarperCollins Publishers, p. 29