A Valley of Goblins

A Valley of Goblins

Goblins lurk in a remote corner of Utah. They aren’t the Halloween type! Instead, they are unique, curiously shaped rocks by the thousands. I recently visited these rocks in Goblin Valley State Park, where I hiked around the area for hours. While admiring the sculptured goblin forms, I thought about how spooky it would feel to wander there on a moonlit night, especially on Halloween! 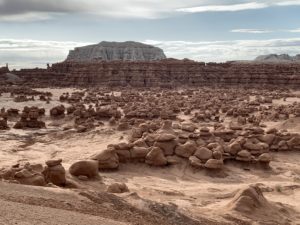 We know the rock formations in Goblin Valley State Park as hoodoos. Hoodoos are columns or pillars formed by layers of rock with differing resistance to weathering. The strongly resistant layers create caps over the less resistant layers, which are more easily removed by wind and water. Hoodoos occur in sandstones and shales, or in volcanic rocks, and we can find them in arid regions subject to sporadic heavy rainfall – like southern Utah. In Goblin Valley, they tower over people and are in an endless variety of strange shapes. 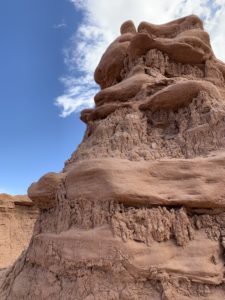 The goblins of Goblin Valley result from weathering of the Entrada Sandstone. The sandstone, siltstone, and shale composing this rock formation were deposited near the margins of a Jurassic Sea between about 170 to 140 million years ago. In this ancient environment of tidal flats and sand dunes, a thick pile of fine-grained sediments developed as the region subsided, and the seaway moved back and forth across the landscape. Over millions of years, the sediments were compressed under intense pressure and cemented together into the rocks we see today. Powerful tectonic forces during the Laramide Orogeny roughly 60 to 40 million years ago subsequently folded and fractured these rocks, now part of a large dome-shaped fold called the San Rafael Swell. The joints (cracks) that developed across the rocks created zones of weakness that could weather more rapidly, so wind and water have eroded the goblins into their strange shapes. New goblins are currently developing in the cliffs surrounding Goblin Valley.

Geology Note: Many of the spectacular arches, cliffs, and hoodoos of Arches National Park are also developed in the Entrada Sandstone, which covers a large area of southern Utah. The impressively tall hoodoos of Bryce Canyon National Park are much younger and sculpted into the Claron Formation, originating from rivers and lakes around 60 to 40 million years ago. In the famous Cappadocia region of Turkey, the so called “fairy chimney” hoodoos are the locations of homes carved into young volcanic rock–I’d love to see these, so I hope to visit this area someday.

In Native American legends, strange rock sculptures were considered the petrified remains of ancient beings. The name hoodoo has an origin in African religious traditions, with spiritual powers attributed to certain natural forms. The locals around Goblin Valley apparently adopted the goblin name for their hoodoos. Goblins are the creatures of folklore, and they are usually small, grotesque, and mischievous, with magical abilities. 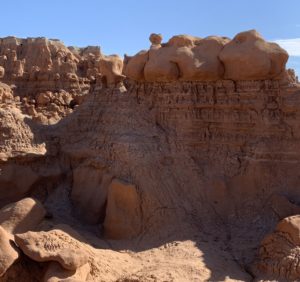 I think it is fascinating to ponder the long history that created the Entrada Sandstone goblins. For millions of years, sand and silt accumulated along an ancient seaway, which then became sandstone and shale after burial deep underground, then these rocks were gradually uplifted and eroded at the ground surface–forming the goblins we can see now, in our brief moment in time. 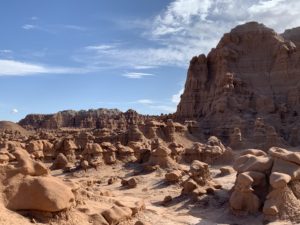 The goblins are eroding away rapidly. How long will they last? Maybe another million years—but we won’t know! If you visit Utah and have a chance to see them, it will be well worth the trip. 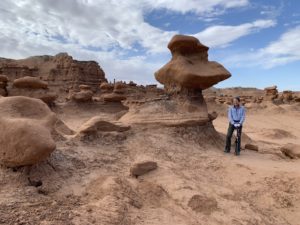 All photos are mine, Goblin Valley State Park, May 2021