For thousands of years, the ancient Andean people revered gold. They collected nuggets and flakes of this luminous metal in icy river water and dug small mining tunnels and quarries. They created exquisite gold art objects to be used as offerings in their religious rituals and to decorate prestigious individuals, both living and dead. The Incas worshiped Inti, the Sun god, and they considered gold the sweat of the Sun, and their emperor the son of the Sun. They shaped gold into large discs that represented the Sun, and when they covered the exterior walls of important temples with thin hammered sheets of this metal, the reflected sunlight created a brilliance that could be seen for miles. 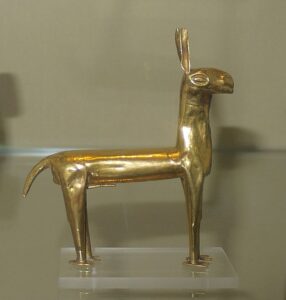 In the rugged high Andes Mountains, gold is associated with volcanic rocks and in quartz veins disseminated throughout granitic rocks. The erosive forces of wind, water and scouring glacial ice eventually break down these rocks, freeing fragments of the dense and shiny metal. In sizes ranging from fine powder to large nuggets, heavy gold washes downward into streams and rivers, and collects in accumulations with quartz sand.

Arrival of the Conquistadores and Collapse of an Empire

The gold that the ancient Andeans used throughout their history ultimately led to the fall of the Inca Empire–the largest, greatest and last of the ancient civilizations of South America. In the sixteenth century, lust for precious metals lured Spanish conquistadores high into the Andes of modern northern Peru. On November 16, 1532, Francisco Pizzaro, accompanied by a tattered group of 168 soldiers, with 62 mounted on horses, marched into Cajamarca. In the conflict than ensued, Pizarro and his men captured the reigning Supreme Inca, Atahualpa, and massacred thousands of his soldier attendants.

To regain his freedom, Atahualpa promised Pizzaro a ransom the size of the large room he was imprisoned in, filled once with gold and twice with silver. Over the next few months, and to the astonishment of the conquistadores, the Inca’s subjects collected this enormous quantity of precious metals from throughout the empire—possibly the largest ransom ever paid for any individual in history. Pizzaro accepted the ransom but continued to hold Atahualpa as a hostage for months, then had the Inca ruler executed in August 1533. 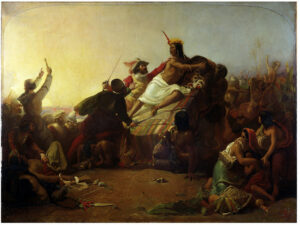 Spanish chroniclers recorded fabulous art objects in the ransom collection, but nearly all were melted down in furnaces, said to have burned for months. Shipment after shipment of blocks of Andean gold and silver were sent off to Spain. The Spanish then turned their attention to metal production from the Inca mines. They also found an even easier route to collect precious metals: looting.

The lands of the Incas and their ancestors may top the list of the most intensively looted ancient centers of civilization on the planet. The conquistadores began this practice when they realized that tombs of ancient Andean nobility held vast stores of silver and gold objects. Looting became synonymous with mining, and they actually divided ancient monuments into claim areas with titles assigned and registered in Spanish archives. The staggering monetary value of the precious metals shipped from the Andes powered the Spanish empire for many years and transformed the economy of Europe.

Andean Gold in the Modern World

Rich deposits of gold continue to be found in the Andes Mountains today. With globalization and an economic model rooted in commodity exports, Peru and other Latin America countries are major exporters of metals. Gold mining ranges from small-scale and mostly illegal operations to massive open-pit quarries operated by multinational companies. Illegal “artisanal” mining is widespread. The miners go to difficult areas–the jungles of the Amazon and the cold high mountains. These include Mt Ananea, with the sprawling and impoverished settlement of La Rinconada at an elevation of 16,700 feet (5,100 m), a difficult place for any type of life and reportedly the highest permanent human settlement on Earth.

Abundant gold found in river sediments is mined in the lowlands of the Amazon Basin in small operations. In these rainforests, widespread deforestation and sedimentation of rivers are a disastrous result of the mining. The miners use mercury amalgamation for gold-processing and large amounts of mercury released into rivers and streams are causing serious environmental contamination. (See my post: https://roseannechambers.com/the-dark-side-of-gold/) In the high mountains, thousands work in “informal” mines with hand tools and labor practices underground that are little changed from centuries ago. Women and children pick through the rocky spoil piles from these mines, scavenging for any shiny bits that have been overlooked. Driven by poverty, the mining frenzy increases as spot prices for gold rise, with virtually all seekers harboring a hope for potential riches that are almost always elusive.

On the opposite end of the spectrum is one of the largest mines on Earth, the enormous open-pit Yanacocha gold mine near Cajamarca (ironically, the city where Pizarro imprisoned Inca Atahualpa in 1532). A joint venture of a Peruvian company and U.S.-based Newmont Mining Corporation, this mine began production in 1993. The operation has a long and sordid history, including severe environmental degradation, intimidation of activists opposing the mining, and minimal sharing of economic benefits with the indigenous residents of the region. 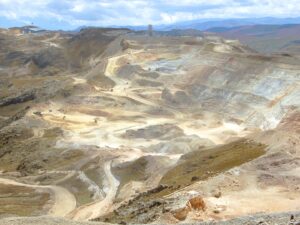 Similar large-scale mining operations exist for metallic resources throughout Andean countries. In this economic model, multinational mining corporations from the United States and Canada, plus countries like China, invest in major mining projects. The metals are sent off to other continents and hundreds of millions of dollars in profits are pocketed by people in major cities that are thousands of miles away from the Andes. Popular protest and environmental justice movements are speaking out against these extractive industries and making demands that corporations invest in the communities where they are exploiting resources.

Gold helped to shape ancient Andean cultures–and continues to play a role in the lives of the Andean people today. It is truly a gift and a curse.

Painting of Capture of Atahualpa, on 16 November 1532 by John Everett Millais,  1845.  https://en.wikipedia.org/wiki/Atahualpa#/media/File:John_Everett_Millais_-_Pizarro_seizing_the_Inca_of_Peru.jpg

Photo of Yanacocha gold mine near Cajamarca, Peru in 2005 by Euyasik.  https://commons.wikimedia.org/wiki/File:Yanacocha-Goldmine.jpg