The ruler of the Inca Empire, the Supreme Inca, was considered the son of the Sun and a deity on Earth. As political leader and military commander of vast lands in the Andes Mountains, he had power over millions of people in his empire. We have found no identifiable images of Inca rulers that are securely tied to pre-Colonial era dates–perhaps because an image might be subject to witchcraft. From descriptions and drawings made after the fall of the empire, plus a few elaborate tunics and other items of elite clothing that exist today, we have indications of the clothing of emperors and other royalty. 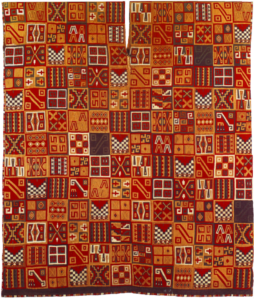 The Incas highly valued cloth. Fine textiles had vital roles in economic and military realms and could convey important social, ceremonial, and religious meanings. They gave elegant cloth as gifts and grants in diplomatic exchanges and to cement political allegiances. Fabric had important uses in rituals, including in ceremonies where large quantities of the most exquisite material were burned in offerings to deities. The Incas offered only the best to the high spiritual powers. 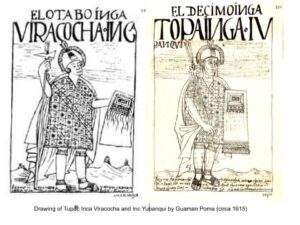 We recognize an extremely long and rich tradition of fiber arts from the Andes Mountains. Ancient Andean cultures may have the longest continuous history of fiber use found anywhere on our planet. From exquisite embroidered shrouds used to wrap mummies many thousands of years ago, to the finely woven tapestry tunics worn by Inca royalty, the artistry of these textiles is exceptional. Materials available–cotton selectively grown for long fibers, and soft camelid wool from domesticated alpacas and wild vicuñas–are highly suitable for spinning, dyeing and weaving. Over thousands of years of experimentation, the Andeans developed virtually every weaving method known today, including some techniques that are either impractical or impossible to accomplish on mechanical looms.

Textiles are relatively light and easy to carry on the backs of travelers or llamas, making widespread distribution possible. These items are fragile, and we have recovered most that have survived over centuries from archaeological sites in the arid coastal zones of the Andes. Preservation typically is poor in the cold and damp highlands. 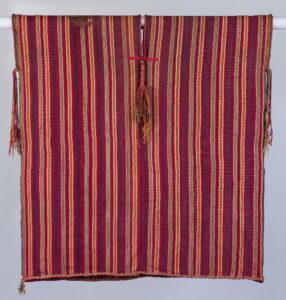 The earliest archaeological evidence of Andean textile traditions can be traced back to Guitarrero Cave in northern Peru, where ancient artifacts of uniformly twisted and looped plant fiber products were found in the 1960s. Some items, including fragments from clothing or a bag, were made between 12,000 and 11,000 years ago. Amazing! The fiber scraps found at Guitarrero Cave are simple, but uniform and well-executed, showing they are not the earliest attempts at fiber work. The textiles and cordage are made from the leaf fibers of agave or bromeliad, and both plant families grow near the cave today.

At a few sites dating back to around 5,000 years ago, archaeologists have found thousands of fragments of cotton cloth that were made without looms by a twining technique somewhat like macramé. Many of the pieces contain complex designs of birds, snakes, crabs and other creatures, in sophisticated imagery that is matched by the impressive technical achievement. Artists incorporated a variety of colors, including red, blue and yellow, into the designs by employing a change of threads. 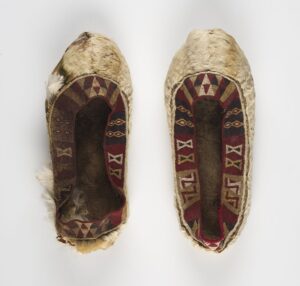 The threads spun by the Andeans are known for their extraordinary regularity in diameter and for the fineness of the thread, allowing creation of silk-like fabrics. They could spin raw wool and cotton fibers using drop spindles that typically comprised a wooden shaft about 12 inches long with a heavy spindle whorl made of wood, stone, ceramic, or metal. One hand would hold the raw fibers to stretch and feed them into the hand holding the spindle, which was dropped while spinning rapidly, forming a thinly spun thread.

The Andeans employed three different loom types to make cloth. These looms are known primarily from depictions on pottery, but also from preserved artifacts. We know the most ancient and widely used as a back-strap loom, where the weaver leans backward or forward to apply pressure on the warp threads while passing the weft through the warp. The Incas also used upright, or vertical, and horizontal looms that have fixed-tension.

Women did most weaving, although some men also wove. The Incas produced vast amounts of fine textiles for use by the elites, with coarser cloth used by commoners. The designs woven into cloth were mostly geometric patterns of simple forms for lower status textiles and extremely complex patterns for royalty. The decorative schemes, weaving techniques, and garment forms practiced show ethnic identity and social rank. 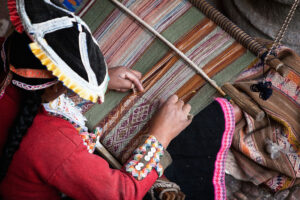 Soldiers in Incan armies wore a uniform of a tunic with a black and white checkerboard pattern and a red yoke. The sight of thousands of warriors in these bold tunics surely conveyed a powerful message of imperial power. Soldiers also used quilted cloth for helmets and armor, or they wound layers of cloth around their arms and bodies. 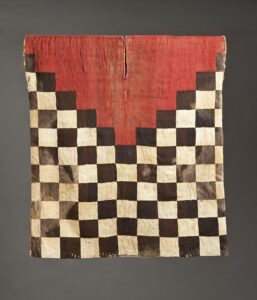 In 1533, a Spanish conquistador recorded seeing an especially unusual item of Incan clothing. It was a fine cloak worn by the Inca Atahualpa while he was being held as a hostage. Admiring the dark brown and incredibly soft garment, the puzzled conquistador asked for an explanation: the Inca replied the garment was made from the fur of bats. Hundreds, maybe even thousands, of tiny bat pelts.

From cotton and wool to bat fur, the ancient Andeans made the most of the vast abundance of resources available in their environment.

Photo of Inca shoes of llama and alpaca wool.  https://commons.wikimedia.org/wiki/File:Inca_shoes.jpg