California encompasses tremendous diversity, and this includes rocks of virtually every age. There are volcanic rocks that cooled and solidified during the past centuries, and metamorphic types more than one billion years old. Needless to say, the geology of the state is complex, and a reflection of a long and dynamic geologic history. I’m fond of all types of rock, but my favorites are shales, sandstones and limestones that preserve evidence of ancient plant and animal life. The older the fossils, the more interesting. So, how could I resist the opportunity to look for fossils in Cambrian sedimentary rocks that are more that 500 million years old–especially when they are known to contain a rich marine fauna? 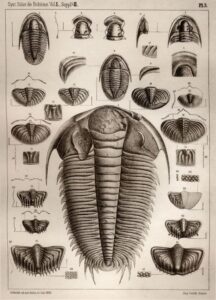 The Trilobite Wilderness encompasses the Marble Mountains, a small mountain range deep in the Mojave Desert of southern California. On the edge of these mountains, rocks named the Lathrop Shale contain trilobites. Once I learned about this, I was eager to visit the area, and on a recent trip I finally had the opportunity to spend many hours scouring shale outcrops for fossils. (Important note: collecting anything in a designated Wilderness Area is prohibited, of course, so the expression “take only pictures, leave only footprints” is essential to follow in these areas.) 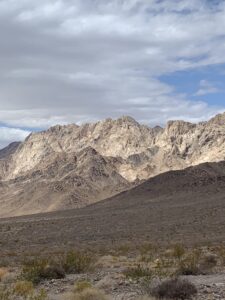 First, some background. Over many years of examining rocks, I’ve learned that it can be difficult to find fossils. I became accustomed to seeing exquisite fossil specimens during classroom hours when I was a University student — but finding these in place is quite a different experience. Mostly, this is because fossils are typically few and far between, plus they rarely look nearly as nice as specimens that a skilled museum preparator has laboriously cleaned by removing the surrounding rock with sharp tools. My expectations of finding trilobites in the Lathrop Shale were low, but hiking in the Marble Mountains wilderness would definitely make the trip worthwhile.

Trilobites, now extinct, flourished in the Paleozoic oceans for about 300 million years–an exceedingly long and successful run. (Dinosaurs roamed the planet for about 170 million years–impressive, but not nearly as long as the creepy-crawly trilobites.) Thousands of trilobite species, including new ones scientists identify each year, are found in rocks worldwide. As arthropods, related to other invertebrates with exoskeletons including spiders, cockroaches, and crustaceans like crabs and lobsters, trilobites left an extensive fossil record.

These bottom-dwelling animals appeared suddenly in the fossil record about 520 million years ago. Even the oldest ones found have distinctive characteristics, including a three-part body with a hard covering that was moulted as the animal grew, and complex, compound eyes with lenses made of calcite. Clearly, trilobites had been evolving for a long time before appearing in the rock record, but details about this remain mysterious.

Trilobites met the end of the line in the Permian-Triassic Extinction Event, 250 million years ago when over 80 percent of the marine species and 70 percent of the terrestrial species on earth became extinct. The causes of this event are controversial, but massive volcanic eruptions that lowered oxygen levels were a likely trigger. Global warming, high levels of carbon dioxide, and ocean acidification helped to set the stage for the extinctions. Hmmm…

The marine rocks of the Latham Shale in the Mojave Desert are of Early Cambrian age, deposited circa 515 million years ago. During this time, the region was near the equator and close to the ancient continent of Laurentia. Limestone was deposited in shallow water reefs near the continent, and fine silt and clay accumulated farther offshore. Along with the Latham Shale and Carrara Formation of the Mojave Desert, the Burgess Shale of similar age was deposited in what is now western Canada. Each of these rock formations (plus many more) produce remarkably well preserved Cambrian fossils. The Burgess Shale, especially, is famous for many alien-appearing organisms that began to evolve during the Cambrian, with colorful and creative names like Wiwaxia, Anomalocaris, and Hallucigenia (yes, those are the scientific names!). Stephen Jay Gould brought attention to these rocks with his best-selling 1989 book, Wonderful Life–The Burgess Shale and the Nature of History.

The trilobite fauna of the Latham Shale is dominated by Olenellids (Order Redlichiida). Other fossils found in the formation include some of the earliest brachiopods with hinged teeth. Brachiopods look similar to clams, although they are not closely related to mollusks. They were extremely abundant during the Paleozoic but most became extinct at the Permian-Triassic boundary; there are still some living species recognized today. 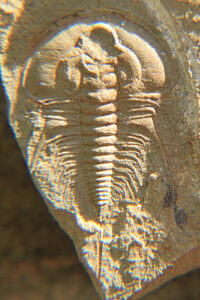 There are also abundant trace fossils in the Lathrop Shale, known as ichnofossils, which are tracks, burrows, feeding marks, and other evidence of biological activity by living organisms. These traces of ancient life are important indicators of ancient environments. Trace fossils from vertebrates, including huge three-toed dinosaur tracks and coprolites (fossil feces) can be quite dramatic, but even tiny footprints and tail-drag marks that show where an ancient small reptile once traveled are fascinating. 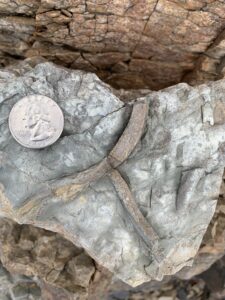 Tracking Down Trilobites and other Fossils

So, did I find any trilobites when I searched through Latham Shale layers? Unfortunately, no. Not a big surprise, as the trilobites are comparatively rare. I did, however, find lots of other interesting fossils! The most abundant were trace fossils, and my photos are of a few of the many examples that I saw. 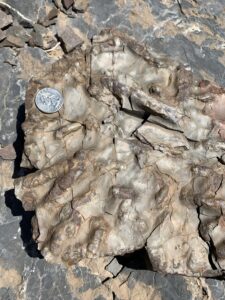 Trace fossils in the Lathrop Shale

Also, in a limestone bed near the base of the Lathrop Shale, there is an extensive algal mat formed by cyanobacterial growth, where calcium carbonate precipitated over mats of bacterial filaments. The spherical growths of these so-called oncolites are similar to column-shaped stromatolites, which form the oldest known fossils. Stromatolites date back to an incredible 3.5 billion years  — only slightly younger than the oldest rocks known, at 3.8 billion years old. In Western Australia, stromatolites continue to grow today at Shark Bay. 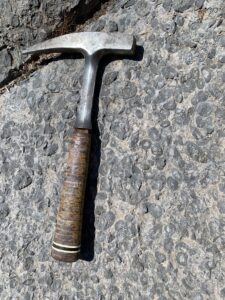 I can claim a few impressive invertebrate fossil sightings (to me, at least) at other localities. While hiking through an area of Burgess Shale in Canada about a decade ago, I had the good fortune to spot a trilobite. Just one, and I don’t have a photo, but as I recall, it was somewhere between 1 and 2 inches long, and clearly exposed, embedded in a large chunk of shale. A great thrill!

Also, a few years previously, I found numerous well-preserved brachiopods in rocks in Kanab Creek, a tributary of the Colorado River in Arizona. This was on a Sierra Club Service Trip when we backpacked into a deep canyon to maintain trails. The strenuous work we did was exhausting, but among the many benefits of the trip were opportunities to hunt for fossils in the creeks and dry washes crossed by the trails. Our packer, who was wrangling a few horses to carry in our tools and fresh drinking water, was a laconic, sun- and wind-hardened local man. When I told him I had discovered brachiopods in the area, he drawled: “Don’t you talk dirty to me!” Funny!

Tracing Tire Tracks to the Middle of Nowhere

One of my favorite parts of desert explorations is camping at remote sites filled with silence. We find these sites only after traveling for miles on rough tracks — rocky, deeply rutted, partially washed out roads surrounded by brush that occasionally scrapes the sides of the vehicle (mine has the scratches to prove this; better to scrape a thorny plant than to roll across a sharp rock that might blow out a tire!). As the track degrades and the sun sinks lower, I usually become a bit anxious about finding a campsite (backing up along a track in search of a place to turn around is something I try to avoid).

Admiring the surrounding landscape is a key part of the experience. Change is a constant at dusk as the shadows gradually envelop the land and bats flit above us; then there are dark night skies festooned with millions of stars and the glow of the Milky Way, or we can trace the silvery path of the moon on its celestial journey; at dawn, the orange glow of the rising sun slowly extends across the horizon.

I’ve been traveling and camping solo ever since my graduate research days in the wilds of Wyoming, but when I was alone, I tried not to venture too far off the beaten track. Happily, a few years ago I married an extremely competent man who has been exploring desert wilderness for decades. Now, I’m confident that together we will cope with any difficulties that arise, and none have so far. The experiences of visiting these remote places are priceless to me. Seeing traces of plants and animals that were alive hundreds of millions of years ago is priceless, as well. 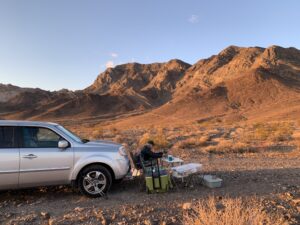 Campsite near the Marble Mountains

My photos from the Marble Mountains, California