Fossils on the Roof of the World

Fossils on the Roof of the World

Did you know that climbers who reach the top of Mt Everest are walking on an ancient sea floor? Standing in a long line of mountaineers waiting to reach the summit, as has happened in recent years, must be an extremely cold and unpleasant experience. IF I was in that line, I would try to scrape aside the snow to look for those fossils. This isn’t going to happen, as I have no intention of attempting that climb. Nonetheless, the story of the fossils is quite interesting. 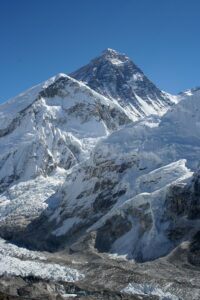 How sea creatures came to be embedded in rocks on the tops of mountains has puzzled people for thousands of years. Numerous creative ideas, usually involving floods, have been proposed and then vigorously defended. Only about 50 years ago, after the theory of plate tectonics was pieced together in the 1960s, did the scientific explanation finally became clear.

Mt Everest has been carved from limestone that originated in warm and shallow seas. Scientists have found evidence that this ancient sea floor began to be uplifted about 50 million years ago, when India began moving north and smashing into Asia. Tremendous forces crumpled, folded, and faulted the converging continents, forming the Himalayan Mountains. The ancient seafloor was shoved skywards over millions of years until today the fossils stand more than 5 miles above sea level. 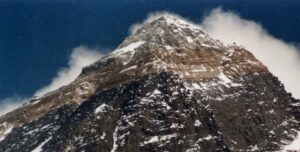 Three distinctive rock formations separated by two faults are recognized on the mountain. Earthquakes occurring along these faults over millions of years have shoved and spliced the different rock units together into a huge stack. The Qomolangma (or Everest) Formation that contains the fossils is found between about 28,200 feet and the top of the mountain at approximately 29,030 feet (yes, there are disagreements about the “true” height). The fossils found in these rocks lived some 490 million years ago during the Cambrian Period. They include small marine crustaceans called ostracods; stalked and feathery “sea lilies” named crinoids; and trilobites, arthropods that populated ancient seas for more than 300 million years before becoming extinct. 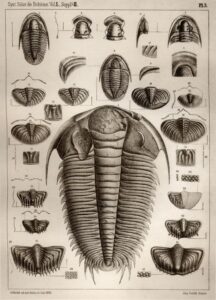 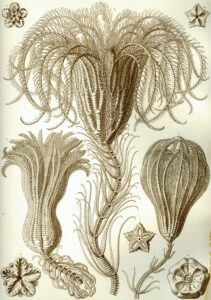 The fossils found at the top of Mt Everest, as well as on many other high peaks around the globe, have a long and colorful history. We live on an amazing planet!

Mt Everest from Kalar Patar – By Pavel Novak on wikipedia.org

Geologic units on Mt. Everest from Kalar Patar by Uwe Gille on wikimedia.org