In the world of the ancient Andeans, glittering gold played a profound role. The Incas and their ancestors crafted gold into prestige objects such as crowns, masks, ear spools and nose rings that indicated social status, and they used gold for ritual purposes in elite burials and in offerings to deities. The brilliant color of gold was an extremely desirable property, and innovative metallurgical techniques were developed to highlight this feature.

The fascination with gold reached a pinnacle by the time of the Inca Empire (1438 to 1532). The Inca emperor was considered the son of the golden Sun god Inti, whose essence was materialized on earth as gold. A temple complex in Inca Cusco, the Coriconcha, or “Golden Enclosure”, had exterior walls covered by thin sheets of gold, with a brilliance that could be seen from miles away. This complex was filled with a large collection of gold objects, including a garden filled with life-sized gold-covered sculptures of corn stalks and corn cobs. 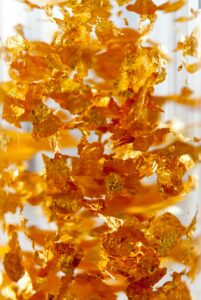 Tiny quantities of gold are widely distributed on Earth, including in ocean water, but large accumulations tend to occur only in specific places. Mountain ranges are prime locations for gold. The erosive forces of ice and running water eventually break down rocks, freeing the dense metal to wash downhill into rivers and streams. Gold nuggets, plucked from icy streams high in the Andes Mountains, were collected by the ancient Andeans from the earliest times. In the burial of a high-status individual near Lake Titicaca on the modern Peru/Bolivia border, archaeologists recovered a gold necklace crafted approximately 4,000 years ago from gold nuggets that were flattened with a stone hammer and then rolled into beads. 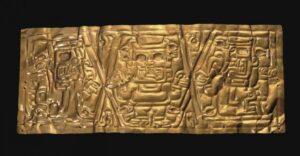 Some 2,500 years ago the artisans of the Chavín culture specialized in hammering gold into thin sheets and embossing the backs to create a raised relief design on the front. By soldering the sheets together three-dimensional objects were created. The Chavín also recognized that the properties for working gold could be enhanced by intentionally adding silver to form alloys. About 1,800 years ago the Moche culture developed methods for enriching the gold on the surface of an object, called depletion gilding. A copper item could be covered with an alloy of gold-copper-silver and either burned or treated with an acid. Rubbing to remove the oxidized copper from the surface would leave a glowing layer of gold as fine as silk. 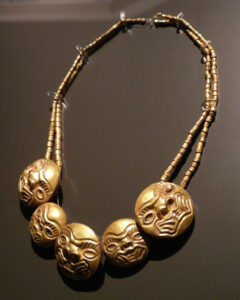 Gold changed the trajectory of Andean cultures in 1532 when the Spanish conquistadors marched into the Andes in search of this precious metal. The outcome was devastating. Between the effects of warfare, disease, and enslavement, the cultural legacy that had developed in the Andes over thousands of years was destroyed.

Growing up in northern California, gold lore surrounded my childhood – even a century after the California Gold Rush. Enormous change came to the region after gold was discovered on the American River in 1848. And, like the history that unfolded in the Andes Mountains, the lust for gold devastated the indigenous population and left a legacy of environmental damage that still haunts the landscape today. There are dark sides, as well as bright, to the glitter of gold.