High in the Andes Mountains of Peru, the archaeological site of Moray holds many mysteries. Starting with natural sinkholes, Inca builders lined a set of huge circular depressions with concentric terraces. Constructing Moray required tremendous engineering skill and thousands of hours of construction efforts, so why was it built? In our attempts to understand the motives of the Incas, it is helpful to consider what this culture valued. 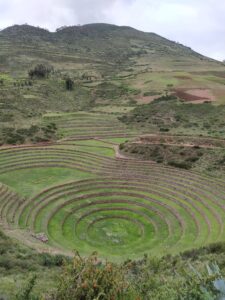 The Inca Empire was built on the success of agricultural production. This was directed by the state on a massive scale, since a stable food supply was essential for a population estimated at 14 million or more people. Huge irrigation systems and terrace construction projects were undertaken throughout the empire. The landscape was dotted with storage facilities for excess food of all types, cloth, ropes, tools, and other items that were distributed in times of need.

From the river valleys near sea level to the high mountain plateaus, crops were grown that were optimal for the local settings. Annual variations in environmental conditions, including precipitation amounts and frost frequency, increase with altitude and cause significant fluctuations in crop yields. Judgements on the timing of optimal planting conditions must be adjusted each year to compensate for these differences, including early rainfalls and late frosts. In the mountains, crops have a high risk of failure, and for the ancient Andeans, typically only one good harvest could be obtained every three to five years. Nonetheless, the Incas managed to generate the surpluses they needed to expand and maintain their empire.

Moray was clearly used for some type of agricultural production. Pollen studies indicate a wide variety of plants have been grown on the terraces. It is difficult to know which crops the Incas grew, however, because many of the plantings were made in post-Inca times by local farmers. Curiously, an extremely high number of wild plant species were apparently growing on some of the terraces in the 1970s, prior to the beginning of restoration efforts at the site. This appears to be an important clue, so more on it, below.

Irrigating crops would have been possible on only a relatively small percentage of the site, so the significant investment of human labor to construct Moray makes it unlikely that agricultural production to feed a large number of people was a primary purpose. Also, surveys have indicated that the circular terraces do not have the slopes nor a canal system suitable for irrigation, which would have been necessary for large-scale production. Additionally, the Incas were certainly aware that adding large amounts of water could have exacerbated the tendency for landslides, potentially destroying their careful work. 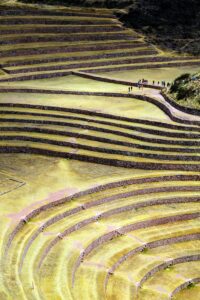 The use of the terraced circles and adjoining large plazas for religious ceremonies and community gatherings is consistent with what we know about Incan practices, but the tremendous construction effort involved (even for the tackle-almost-any-daunting-task Incas) suggests there were additional objectives.  There are several pieces to this puzzle.

First, for a culture that relies heavily on agriculture, leaders typically will provide advice on the optimal time to plant crops, and endeavor to coordinate the efforts of a disbursed group of famers. Expert knowledge and a calendar are essential for these efforts. (Note: an important way for a prevailing political organization to achieve legitimacy is to resolve problems that a population faces. That’s the ideal, of course; things don’t always happen that way ……)

There is abundant evidence indicating that the Incas and their ancestors consistently marked major events of the calendar year, including the solstices and equinoxes, by careful orientation of their important ceremonial structures. On specific dates, the sunrises and/or sunsets would be aligned with prominent constructed features and natural landmarks, including mountains peaks or rock outcrops on the horizon. This practice was followed at Moray. Researchers have found that on certain dates and times throughout the year, there are distinctive patterns of sun and shade on the terraces, which influence soil temperature and plant growth rates.

Archaeologists believe that the Incans utilized as many “control systems” as possible to govern their large and far-flung society. These included efforts intended to maximize agricultural production, and in turn, to minimize the environmental uncertainty that can give rise to social disorder (and then, to political upheaval – best to avoid ….). The terraces at Moray may have provided such a control system. Side-by-side crop testing of different plant varieties could be conducted to determine those that would be most successful. And importantly, on a small scale, Moray environments simulated the microclimates of the much larger terrace systems under intensive cultivation in the surrounding region. Predictions of the climatic conditions for important actions, such as when to begin planting or to add more water when needed for optimal plant growth, could then be dispersed to the widely distributed farmers.

There are two additional pieces of information that support the idea of a control system. The first, mentioned above, is that numerous wild plant species were growing on some of the terraces before restoration efforts began – and most of those were apparently quite rare outside the site. The patterns of spatial clustering, and the variable time ranges for when these plants flowered, suggest they could have been used as sensitive ecological indicators that reflected the diversity of regional growing conditions.

The second piece of information is that other archaeological sites with concentric terraces have been found in Peru. More sites that are similar but have not been reported yet could possibly exist. Constructed in different eco-climatic conditions, at least some of these circles may have been built with the same objectives as for Moray.

Mysteries remain! What is crystal clear: the Incas were an extremely knowledgeable and sophisticated culture. The more I learn, the more I am impressed by the tremendous accomplishments of these ancient people. 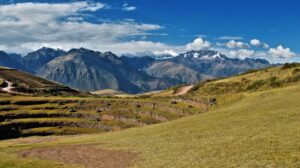 Close-up of terraces at Moray: Photo by Pedro Lastra on Unsplash

Moray terraces with mountains in the background: Photo by Carlos Olaizola on Unsplash