Obsidian, smooth and shiny black volcanic glass, has fascinated humans for tens of thousands of years. An appreciation for shiny objects is not a learned behavior, as even babies are drawn to these. Instead, researchers believe that humans have a natural reaction to shininess that is tied to an innate need–specifically, water. So naturally, as a geologist attracted to rocks, the appeal of obsidian is exaggerated for me!

Obsidian is widely distributed on our Earth – and fortunately, some of the best is practically in my backyard. 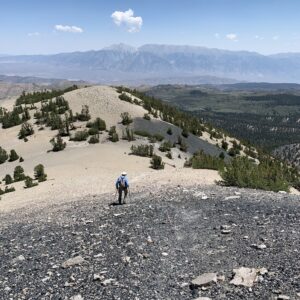 Hiking through an obsidian field near the top of Glass Mountain 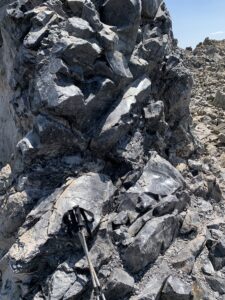 Wall of obsidian at Panum Crater

Evidence of the Explosive History of the Eastern Sierra

Within the past million years, many explosive volcanic eruptions have occurred in the Mono Lake to Mammoth Mountain region of the Eastern Sierra Nevada, just east of Yosemite National Park. There have been several eruptions within the past one thousand years, creating spectacular obsidian deposits, which I admired during recent hikes. Much of the dark obsidian is swirled and folded together with frothy pale gray pumice. How and why these two forms of rock intermingle is quite interesting. But first, some background about these rocks in the Eastern Sierra.

Panum Crater, or more accurately, Panum Dome is on the northern end of the Mono Craters just south of Mono Lake. It last erupted about 650 years ago, with an initial phase of a huge, steam-driven explosion that created a large crater and a later phase that pushed stiff, gas-poor lava slowly upward to form a thick plug inside the crater. The effect is like that of an obsidian castle, surrounded by a moat. About ten miles to the south is a similar landform, known as Obsidian Dome. Slightly older in age, it also has a large plug of lava with abundant obsidian. 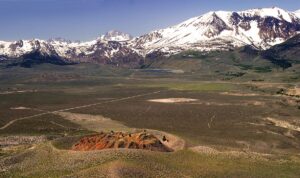 Panum Crater at the base of the Eastern Sierra, California (Wikipedia) 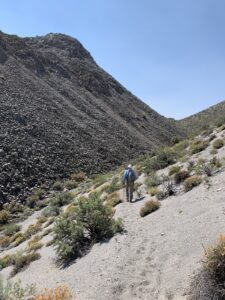 Hiking along the inner caldera rim of Panum Crater; dark obsidian on the left side of the photo is a prominent part of the thick central plug

Glass Mountain lies about 20 miles (32 km) southeast of Mono Lake and is the highest point on a ridge that extends for about 4 miles (6.4 km). The eruptions that shaped Glass Mountain began around 2 million years ago and ceased approximately 780,000 years ago, just before eruption of an enormous quantity of Bishop Tuff began and the Long Valley caldera collapsed. (More information on this region is in my blog post: Earthquakes and Eruptions in Eastern California.)

Wandering through sparkling fields of obsidian is enchanting! Photographs don’t adequately capture the reflection of bright sunlight off this volcanic glass. Reaching the peak of Glass Mountain (elevation 11,128 (3,392 m) requires a steep and tough climb, but the abundant obsidian found on the mountainside easily kept me entertained. Shiny objects are appealing! 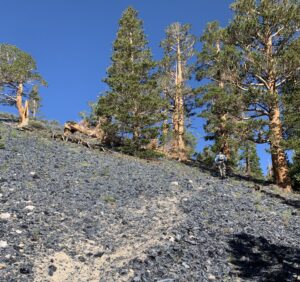 Trail through a field of obsidian on Glass Mountain

Granitic rocks, which contain large crystals that slowly cool from hot magma deep underground, and the volcanic rock rhyolite, which typically erupts explosively from a volcano, have the same composition. Both rhyolites and granitic rocks contain a high silica content, with a mineral assemblage dominated by quartz and feldspars. The high silica makes the hot magma extremely viscous–think pouring honey out of a jar. This type of magma also has a high gas content and is highly explosive, creating rock fragments that are welded together when they hit the ground (think a jar of honey that has blown up all over your kitchen!). Rhyolitic eruptions are on the opposite end of the spectrum from effusive eruptions with slow-moving basaltic lava flows, for example those produced by Hawaiian volcanoes.

Obsidian develops when rhyolitic magma erupting in a volcano cools so quickly that individual atoms “freeze” instead of combining to form crystals. Lacking mineral crystals, glass-like obsidian is hard, brittle and can produce shell-shaped, or conchoidal, fractures. These are ideal properties for precision chipping, so obsidian can produce an extremely thin and sharp edge, a property that humans have used to advantage for tens of thousands of years.

Pumice, which forms from the same type of magma, is rough textured volcanic glass that may or may not include crystals. Decompression of volcanic gases, along with rapid cooling, creates the bubbly texture of this rock. The abundant air pockets in pumice allow this type of rock to float in water. 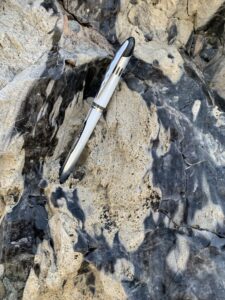 Obsidian and pumice frequently occur together as separate bands within the same rock. Folds and swirls that developed as the hot glass was flowing are typical. As the molten lava flowed, variations in gas bubble size and strength, and the degree to which the molten material could be compressed, produces the different rock types. As the lava flowed outward from the volcano, shear stress caused bubbles to squeeze together and compact–in zones where the shearing is strongest, obsidian develops, and where it is weaker and bubbles solidified, the rock is pumice. 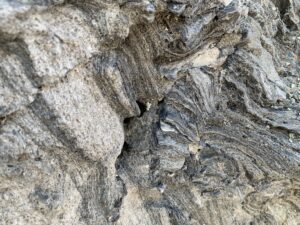 The typical black color of obsidian is a result of submicroscopic, iron-rich dark crystals dispersed in the rock. The same minerals are present in pumice, but because the dark minerals are widely separated in this low-density rock, pumice is typically light gray to yellowish. Other colors of obsidian are derived from varying degrees of oxidation of these minerals. Glass is unstable, especially when exposed to water, so obsidian degrades over time. Long after the rock has cooled, small white spots begin to form from crystals that are starting to weather and breakdown, a process called devitrification. 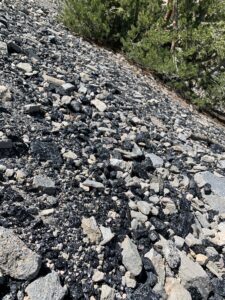 Field of mixed obsidian and pumice on Glass Mountain

There is much more about obsidian that can fascinate. More in another blog post soon!

Photo of Panum Crater at the base of the Eastern Sierra, California, 2011, by Jitze Couperus https://en.wikipedia.org/wiki/Panum_Crater#/media/File:Panum_Crater_(5493402271).jpg