Did you know that complex behavior and intelligence developed on two very different evolutionary branches? In a fascinating book, Peter Godfrey-Smith* writes that the closest we will come to meeting an intelligent alien is an octopus. In a completely independent experiment from the intelligence that evolved in humans, octopuses have the brain power to use tools, solve puzzles, and explore objects simply out of curiosity (no food rewards attached, as in the typical “is this edible?” explorations). The octopus is an invertebrate of all things – a subgroup of mollusks known as cephalopods. Their close relatives are clams and snails – far from being the sharpest tools in the tool chest, or the cousins you’d want to brag about. 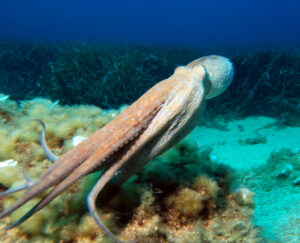 They also can use objects in novel ways.  Researchers in Indonesia in 2009 found octopuses in the wild carrying around coconut shells that had been cut in half neatly and then discarded by humans. After nesting two halves together, an octopus will carry the coconut shells across the seafloor, then assemble the halves into a sphere around itself – effectively creating a portable home. Assembling, dissembling, and transporting a “compound object” in anticipation of future use is an extremely rare animal behavior. Check out a few YouTube videos with the search terms: octopus with coconut shells.

To find the most recent ancestor we had in common with the octopus, we need to go back to a worm-like creature 600 million years ago. The evolutionary line leading to the octopus contains spiders, beetles, moths, and oysters – all with small nervous systems except for the cephalopods. The development of the large brain and complex nervous system of the octopuses developed along a completely different trajectory than those in humans. Fascinating! 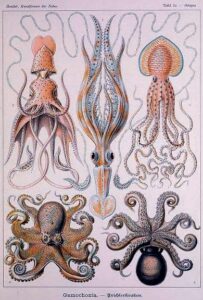 * Godfrey-Smith, Peter, 2016, Other Minds – the Octopus, the Sea, and the Deep Origins of Consciousness; Farrar, Straus, and Giroux, New York