When mammoths, mastodons, ground sloths, horses and other Pleistocene megafauna became extinct in the Americas some 12,000 or so years ago, what happened to the plants those animals were eating?  It’s an interesting story, especially relevant during the Fall pumpkin pie season.  The extinction of almost all the giant mammals in the Americas occurred shortly after the arrival of Homo sapiens. While the causes of this upheaval continue to be debated, overhunting likely played a major role in those extinctions. However, there is some good news (for a change….) – shortly after these large animals became extinct, humans actually saved some important plants through domestication efforts. (Stay with me – we’ll get back to pumpkin pie.) 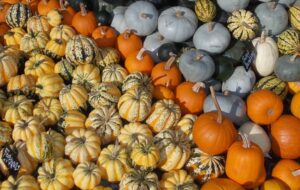 Big herbivores like mammoths and mastodons have a significant impact on the plants in their environment.  Besides trampling on the vegetation and disturbing the surrounding soil, big animals need to eat quite a lot of food (duh), so some plants that evolved along with them developed the hardy characteristics of rapidly re-growing secondary vines and leaves, plus large and robust fruits. After mammoths ate those fruits and roamed around the landscape, looking for more tasty treats or maybe a mate, they periodically deposited the plant seeds in a wonderfully nutrient-rich pile of dung.  A great start for germination and growth of new plants! 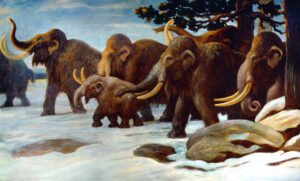 Then change happened – after all those big animals disappeared, how were the plant seeds going to be distributed? Some seeds were moved about by gravity and floodwaters, and some by small mammals and birds, but those methods weren’t nearly as effective as dispersal by large herbivores. Many plants were headed the way of the mammoths: out.

Enter Homo sapiens again. Cucurbita, the genus that includes pumpkins, squashes and gourds, were domesticated throughout the Americas very early in human history, including in the Andes Mountains of South America (yup – my current favorite research interest!) Today, hundreds of cultivars of Cucurbita sp. are grown worldwide. The wild varieties of Cucurbita contain harshly bitter compounds that the mammoths ignored — lots of these seeds have been found in mammoth dung — but that smaller animals avoided. For people to enjoy these plants, therefore, it meant that the road to domestication – and pumpkin pie – was long and winding, but ultimately fruitful.

So, the next time you enjoy pumpkin pie, or pumpkin pancakes, or a pumpkin muffin, you can also reflect on the history that gave us this delicious and nutritious food.  A quote by John Muir captures this concept well:

‘When we try to pick out anything by itself, we find it hitched to everything else in the universe.’  John Muir 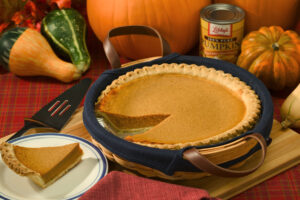