Small salt ponds numbering in the thousands are arranged on steep mountain slopes near the city of Cusco, former capital of the Inca Empire, high in the Andes Mountains of Peru. Known as Maras, and originating from a saline spring, these salt ponds have been tended carefully since Inca times, and possibly for hundreds of years before the Incas. The salt in animal tissues, such as meat, milk, and blood, provides this essential mineral to people who live exclusively on meat. Those who live primarily on grains and vegetables, however, need to add salt to their diets. The value of salt for seasoning and to preserve food has made it a valuable resource and trading commodity throughout human history; manufacturing salt is among the oldest chemical industries.

The spring that feeds the Maras salt ponds is 8 to 9 times saltier than seawater and originates from hypersaline rocks that were once beneath an ocean. Tens of millions of years ago a section of this ocean was isolated inland, where the water slowly evaporated, leaving rich salt deposits in the muddy sediments below. Today, this salt leaches into the groundwater that is being discharged in the spring at Maras. The rate of water flow in the spring is constant throughout the year, so nearby Lake Huaypo is probably adding more saltwater into the groundwater system through seepage. Similar salty springs can be found in other parts of the Andes Mountains, and salt deposits are common in the dried-up remains of the giant Pleistocene lakes that once covered the high Altiplano plateau. Salt production in the Salar de  Uyuni in Bolivia is shown below. 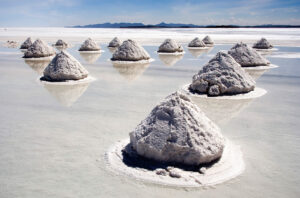 I had the opportunity to visit the Maras salt ponds on one of my trips to Peru. Located at an elevation of around 11,000 feet and about 25 miles to the northwest of Cusco, the ponds are in a scenic area on the slopes of Qaqawinay Mountain. After admiring the huge area covered by ponds, I was surprised to see only a small spring bubbling inconspicuously out of a shallow ditch. That water, however, has been adequate to continuously support salt production in the region for centuries. The terraced system of salt ponds on the slopes is fed completely by gravity, as water moves downhill from the highest ponds into the lowest. Cooperation between members of the community who harvest the salt is essential to maintain the pond and levee system and monitor the flow of water. 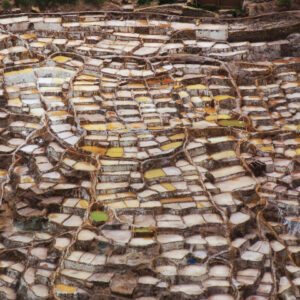 The small ponds are filled with spring water to a depth of a few inches, and over several days the sunlight and dry air evaporates the water, leaving a thin layer of fine salt crystals. More water is added, and the cycle is repeated until a few inches of salt have accumulated. This salt layer is then broken up, washed with more spring water, dried, scraped up, packed into sacks, and carried away. Most salt is produced during the May to November dry season, as rainwater during the rainy season dilutes the salt water.

Only a single pond is used to crystallize the salt produced from the spring at Maras. Solution modeling has shown that the crystallization sequence for this hypersaline water is as follows: first dolomite (calcium magnesium carbonate), then gypsum (calcium sulfate dihydrate), then anhydrite (calcium sulfate), and finally halite – the mineral form of sodium chloride, also known as rock salt. Not surprisingly, the major impurities that are found in the Maras salt are from the minerals that crystallize before halite – specifically lots of calcium, magnesium, and sulfur. Other random contaminants are added from wind-borne dust and from the soil on the walls and bottoms of the unlined ponds. 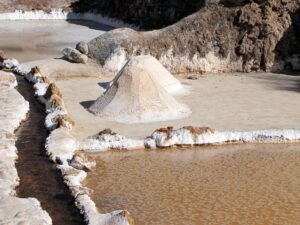 Modern table salt production aims to achieve a high purity of 97 to 99 percent sodium chloride. Multiple stages of evaporation and recrystallization are part of the process used before the brine is supersaturated with sodium chloride, with some steps that include the addition of chemicals to precipitate impurities. The take-home lesson here: when you have a choice, stick with salt produced by modern methods.

When I visited the Maras salt ponds, I felt like I was going back in time. Around 500 years ago Maras was part of one of the vast estates of Wayna Qhapaq (aka Huayna Capac), an important Incan emperor who ruled late in the short history of this empire. Major feats of Inca engineering were accomplished for this estate, including channelizing a river in the valley below, draining swampy land, creating an artificial pond for fish, and growing maize, sweet potatoes, coca, chili peppers, cotton, peanuts, and other crops. The salt ponds high above the valley were a valuable part of the estate. After the Spanish conquest, the area was coveted by several of the conquistadores who were seeking to score land grants/grabs (the list allegedly included the chief grabber, Francisco Pizarro). As a result, 16th century Colonial records provide many details about the assets of this former Inca estate.

Today, a community-run company named MaraSal S.A. owns and operates the salt ponds, which have also become a popular tourist attraction. Operations in the patchwork quilt of ancient ponds continue as they have been for hundreds – and perhaps thousands — of years.

Salt mounds in Salar de Uyuni, Bolivia. Photo taken by (Luca Galuzzi) * http://www.galuzzi.it The Salar de Uyuni is the world’s largest (12 000 km²) and highest (3 700 m) salt flat, ca. 25 times as large as the Bonneville Salt Flats. It’s the remnant of a prehistoric lake surrounded by mountains without drainage outlets. Salt is harvested in the traditional method: the salt is scraped into small mounds for water evaporation and easier transportation, dried over fire, and finally enriched with iodine. https://en.wikipedia.org/wiki/Salt#/media/File:Piles_of_Salt_Salar_de_Uyuni_Bolivia_Luca_Galuzzi_2006_a.jpg

If you like my posts, please scroll down to the bottom of this page and leave your email address on my website. You’ll receive messages only when I publish a new post (about once a week) and my occasional newsletter. Join now to stay up-to-date and learn more about geology, geography, culture, and history.