Sharks, Mantas and Wobbegongs – oh my!

Sharks, Mantas and Wobbegongs – oh my!

I’ve seen lots of sharks when I’ve been on snorkeling excursions in tropical waters. It always feels a bit creepy to see them – afterall, these animals are top predators! (Maybe I remember too many of Gary Larson’s “natural selection” cartoons….?) The first time I was snorkeling in the Galapagos Islands, suddenly, directly below me in deep water, was a group of a half dozen very large hammerhead sharks. Yikes – quite startling! (Our guides assured us that those sharks weren’t interested in eating people, but I wasn’t completely convinced.) Recently, I’ve seen a fascinating shark that is common in the waters of Indonesia and Australia – the wobbegong shark. (It took me awhile to keep the spelling of this name straight – it’s wobbegong and not woebegone – the unhappy facial expression that I sometimes made as a child, and maybe even beyond ….) 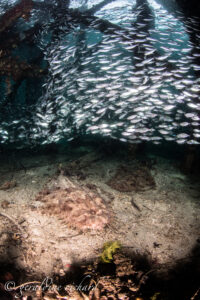 Wobbegongs are a type of carpet shark that are named for their mottled coloring that resembles a well-worn Persian rug. It is also an appropriate name because they are bottom-dwelling creatures that hang out on the seafloor. These sharks  have an exotic fringed jaw line – the “shaggy beard”, from which their name allegedly originated in the Australian Aboriginal language. Their flattened bodies, patterned skin and fringes provide wobbegongs with great camouflage against coral reefs. As ambush predators, a wobbegong can lie in wait until an appealing fish swims by, and then snap it up for a tasty snack. They are also known to bite swimmers and surfers that come too close or that inadvertently step on them — and once they bite they hold on tightly with their numerous sharp teeth and can be difficult to remove. Ugh. 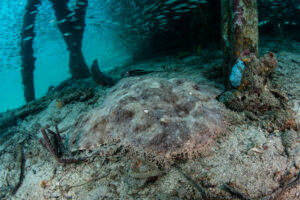 Sharks are successful vertebrates that have been swimming in salty seas for more than 400 million years. They don’t have bones like fish and other large marine mammals – instead they have skeletons composed entirely of cartilage (the same material that shapes our noses and ears). Cartilage isn’t preserved well in the fossil record, so ancient sharks are primarily known from their teeth. Shark teeth are embedded in the gums and they grow and are replaced throughout the lifetime of the shark. Lots of shark teeth are found as fossils because a single individual shark can shed thousands of teeth.

The wobbegong we saw in Raja Ampat, Indonesia, in the photo above, was about 4 feet long, but they can reach 6 feet in length. The other large creatures that we saw while snorkeling were Manta rays. Closely related to sharks, rays also have cartilaginous bodies. They are primarily filter feeders that eat huge amounts of plankton, plus small fish and crustaceans such as shrimp, that are scooped up into their wide mouths as they swim. When I saw a gigantic Manta ray – probably 15 feet across, according to our guide –I knew it wasn’t a predator like a shark. Still, it looked quite menancing. Fascinating to watch, but I wanted to keep a lot of distance between us! 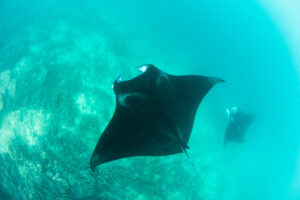 Wobbegong in Raja Ampat by Geraldine Richards, crew member on the Gaia Love

If you like my posts, please leave your email address on my website. You’ll receive messages only when I publish a new post (about once a week) and my biannual newsletter. Join now to stay up-to-date about culture, geography, and history — and to receive a special preview of my forthcoming book!