Saber-tooth cats with huge, gaping jaws and slashing canine teeth, were top predators that roamed around California and other parts of the Americas during the Pleistocene Epoch (from about 2.6 million to 11.7 thousand years ago). Sometimes referred to as the Tyrannosaurus rex of mammals, most of us probably don’t expect that these animals were loving and compassionate. But new data indicate this just might be the case.

They weren’t ordinary cats. In fact, saber-tooth species, with the scientific name Smilodon, aren’t even closely related to the cats or tigers we know today. (Their ancestors diverged from other felines about 20 million years ago.) Larger and heavier than even the biggest and baddest modern lions, the powerful Smilodon’s large head, long canine teeth, and jaws that opened to about 90 degrees, made them excellent “precision killers” who hunted by ambushing much larger prey – a very dangerous game. Around 11,000 years ago, all of these prehistoric cats became extinct, along with mammoths, giant ground sloths, and many other large Pleistocene mammals. 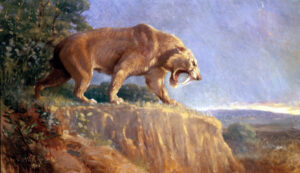 We know a lot about Smilodon fatalis, one of three species that roamed the Americas, because the skeletons of as many as 3,000 individuals have been found in the La Brea tar pits in Los Angeles. For some 35,000 years, large animals blundered into the tar pits (more accurately: natural asphalt seeps) and became irrevocably mired in the sticky muck. A Smilodon would occasionally sidle up to this Big Game Buffet for what appeared to be fast food — but would instead also become trapped in the goo, dying alongside the intended prey. 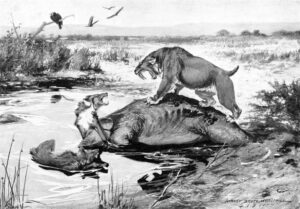 Whether Smilodon was a solitary predator or a pack hunter has been debated for decades. Large cats don’t live in packs today, except for lions. The fossils from the La Brea tar pits are adding a new twist to the controversy. Scientists have examined some 5,000 fossil Smilodon bones that have distinctive marks of injury or illness, but also that healed before the animals died in the tar pits. These range from tooth decay to arthritis, broken legs, and dislocated elbows to horrible traumatic spinal injuries, crushed chests, and massive jaw infections that left animals with misshapen skulls. Ugh. Try hunting for your dinner with one of those nasty afflictions!

Scientists wanted to know more. Recently, the microscopic pits and scratches on the surface of the teeth of injured Smilodon have been compared with others of the species that appeared healthy. And the surfaces indicate that the injured animals had been eating softer food – specifically fat and organs along with flesh, instead of bone. So, other animals were seemingly protecting a wounded individual, taking over the hunting tasks, and then sharing choice tidbits of their kills. Apparently, an injured Smilodon could have a safety net of friends and family — and while recuperating, depend on the kindness of others. Fascinating!

Painting of Smilodon populator by Charles R. Knight, 1903, from the American Museum of Natural History, on wikipedia.org