Whenever I visit the Monterey Bay Aquarium in California, I have to pry myself away from the cuttlefish, nautilus and octopus exhibits. The intelligence, curiosity, and unique body plans of these cephalopods mesmerize me. So it is a big thrill to see these creatures in their natural habitats! On a recent snorkeling trip to Raja Ampat (northwest of the “Bird’s Head Peninsula” of Western New Guinea) I was transfixed by sightings of cuttlefish and squid. Members of the phylum Mollusca, both have soft bodies and eight arms plus two longer feeding tentacles (octopuses have eight arms). 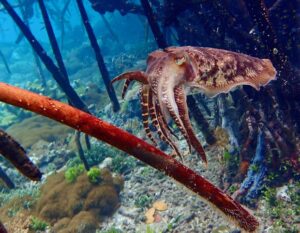 On one calm afternoon snorkel, I watched a large school of 50 or more Bigfin reef squid (Sepioteuthis lessoniana) hover above the reef. Looking like alien spacecraft (except in water, of course), and about 8 to 10 inches long, they appeared to be dancing in formation as they darted around next to me. Their torpedo-shaped bodies continuously changed color, from black to brown to copper, with spots ranging from gold to fluorescent green and then blue. They moved backwards and forwards with ease – their eyes are close to their siphons where they eject water to propel themselves. 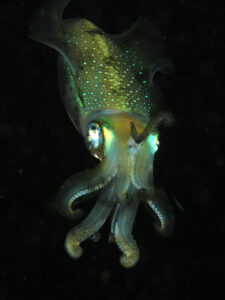 On other days we had the good fortune to watch two different types of cuttlefish. The first sighting was of an extremely rare Flamboyant cuttlefish (Metasepia pfefferi), only about 3 inches long, which propelled itself slowly along a sandy section of the sea floor on its appendages. We also saw large Reef cuttlefish (Sepia latimanus) drifting in the shallow water.  Cuttlefish have membranous lateral fins along the edge of the mantle that move in undulating waves, providing stability to improve steering and slow swimming.  Waves of shimmering light passed along their bodies, allowing them to blend into the sunlight glittering on the white sand, or against dark volcanic rock and coral of the reef. 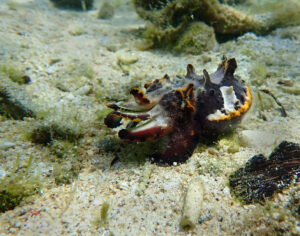 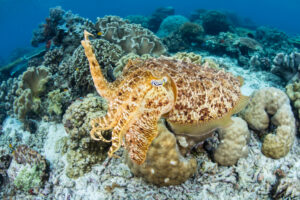 The constant color changes practiced by cuttlefish, squid and octopuses are useful for communication, including warning signals and attracting a mate, and may confuse their prey, as they are active predators. Color changes also provide camouflage so that they can avoid being gobbled up by seabirds, fish, sharks, and other large carnivorous marine creatures. This magic – er, complexity — is related to cells called chromatophores that contain pigment and light-sensing organelles; the size and shape of the cells is controlled by tiny muscle fiber contractions.

Cephalopods have a keen sense of vision and are exceptionally intelligent invertebrates. From an aquarium tank, as well as out on an open reef, they are fascinating beings for us to watch – and in turn, they are checking out those curious-looking humans.  Perhaps that is what is the most compelling about these creatures! 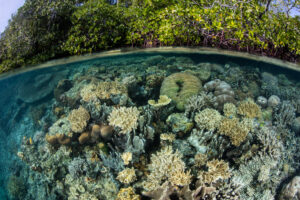 All other photos by the talented Ethan Daniels, expert biologist and guide on the Coral Triangle Adventures trip to Raja Ampat, February 2020