The Andes Mountains influence the modern world in many ways, and recognizing these is a fascinating aspect of my journey in writing about this region. One connection that might be a surprise: St Patrick’s Day celebrations–and potatoes. Wearing green, and perhaps contemplating leprechauns and the luck of the Irish while drinking a hearty beer, fit into St Patrick’s Day festivities for many. I also think about potatoes–and specifically, about the role of this Andean plant in history. My Irish relatives sailed to the Americas in the 1800s; potatoes may have had an important role in their lives, and therefore in mine as well. 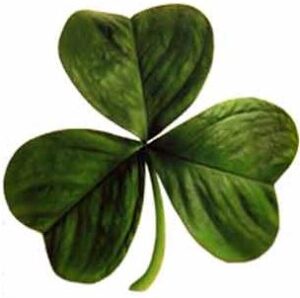 According to legend, Saint Patrick used the three-leaved shamrock to explain the Holy Trinity to Irish pagans.

Potatoes have had profound effects on human societies that are matched by few other plants. In just a few recent centuries, they have had important roles in wars and famines. Thousands of years earlier, this powerful plant was first domesticated in the Andes Mountains.

Wild species of potatoes flourish throughout the Americas, where the starchy tubers require cool and moist growing conditions. We know the ancient Andeans used potatoes as a food source early in history. Archaeologists have found scraps of wild potato dating back to 13,000 years ago, and some possibly much older, at the Monte Verde archaeological site in southern Chile. This site contains a virtual treasure trove of remarkably well-preserved wood and stone tools, scraps of animal hides, wooden corner posts that supported huts, and hearths with scattered food remains. Multiple lines of evidence indicate Monte Verde occupation at least as early as 18,500 to 14,500 years ago.

The ancient Andeans domesticated potatoes as far back as roughly 10,000 to 8,000 years ago. The high mountains, and specifically the high plateau region around Lake Titicaca (~12,000 foot elevation and higher) may have been where they were first selectively cultivated. The potato traces found at the Monte Verde site suggest that domestication may have occurred in the humid lowlands of southern Chile, as well as in the cold high Andes.

Potatoes are a vitamin, carbohydrate, and fiber-packed food that became an important part of traditional diets for the ancient Andeans. Potatoes readily hybridize and can adapt to many microclimates, most remarkably at high elevations where they are resistant to frost and can grow up to elevations around 13,000 feet. The Andeans developed an enormous number of potato types over thousands of years. Indigenous farmers in the Central Andes today grow an impressive 4,000 varieties, give or take a few dozen.

Potatoes are in the nightshade family (genus Solanum) and like tomatoes, eggplants, and other species in this family, they contain a toxic glycoalkaloid poison called solanine. This toxin protects the potato from predators, and is found in the highest amounts in leaves, stems and shoots, with much less in the tubers, where it can impart a bitter taste.

One disadvantage of potatoes is that they are naturally quite vulnerable to molds. The ancient Andeans found a solution. They developed a freeze-drying method to use in the highlands that continues to be practiced in the Andes today. The chuño (a Quechua word meaning frozen potato) that is produced from this process can be stored for months and even for several years.

To make chuño, they spread small potatoes out on flat ground, where the tubers freeze during the frigid nights. During the day, dehydration occurs in the intense sunlight. After a few days, the farmers walk back and forth on the potatoes; the skins break open and the water held in the plant cells is manually forced out. The potatoes then continue to dry and shrink in size, and the skins are removed. This technique also has the advantage of breaking down the bitter tasting solanine in the tubers.

Chuño can be combined with other vegetables and meat in stews, and ground for use as flour. It became an important item that highland people traded for products from lower elevation regions. Chuño was a light and easily transported staple food for the thousands of soldiers in Incan armies.

Setting Sail Around the World

The Spanish encountered potatoes after they marched into the Andes in 1532 to topple the Inca Empire. Carried back to Europe on Spanish ships, they were introduced into many European countries in the 16th century. Over the next few centuries, as the British Empire expanded around the globe, potatoes were spread to other continents. Today, people consume potatoes all around the world, and this plant is ranked along with rice, wheat and maize as a staple food forming a major part of the diet of millions of people.

Initially in Europe, potatoes as a food item had a poor image. People were suspicious of the potentially poisonous properties, and the fact that they grew underground–definitely sketchy. A history of the potato published by What’s Cooking America states: Wherever the potato was introduced, it was considered weird, poisonous, and downright evil. In France and elsewhere, the potato was accused of causing not only leprosy, but also syphilis, narcosis, scronfula [sic], early death, sterillity [sic], and rampant sexuality, and of destroying the soil where it grew. Definitely a daunting reputation to overcome!

Eventually, the hardiness of potato plants contributed to their acceptance. The origin of this plant in the cold highlands of the Andes became a major asset during extremely cold European weather in the 1700s, when most crops failed but potatoes hiding underground continued to grow. By the 1800s, many Europeans were consuming potatoes as a major staple in their diets. 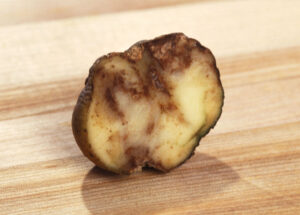 Tragically, during the 1840s, a potato blight reached Europe, probably carried in infected potatoes used to feed people on ships sailing from the Americas. The culprit, Phytophthora infestan, is a parasitic organism known as a water mold, and closely related to brown algae. The blight adversely affected Ireland especially, as potatoes were the primary food for many in the population and only a single variety dominated the cultivated plants. Somewhere between one third to as high as one half of cultivated potato acreage in Ireland was destroyed by blight in 1845, and they lost three quarters of the harvest in 1846. Mass starvation and famine-induced disease resulted in the deaths of some 1 million people. Over one million more sailed away from Ireland, seeking a better life in other countries. The population of Ireland may have ultimately fallen by 20 to 25%, with some estimates even higher.

My O’Davoren relatives came to the United States from Ireland in the mid-1800s. Although I don’t know any details, I suspect that potatoes, or more specifically the lack thereof, might have played a role in their decision to emigrate. 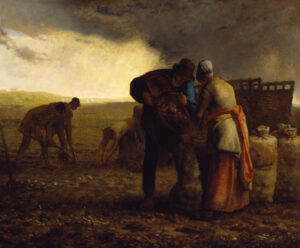 The Potato Harvest by Jean-François Millet (1855)

The importance of potatoes has been captured in many artistic renderings, including Van Gogh’s haunting 1885 painting of The Potato Eaters, and Millet’s 1855 dark and stormy Potato Harvest. Potatoes are esteemed for the production of vodka, as nutritious fodder for livestock, for starch to thicken many foods, and even in the manufacture of paper.

Then there are toys. As a child of the 1950s, I played with an “original” Mr. Potato Head–complete with eyes, ears, mouth, and other miscellaneous parts with sharp points you jammed into a real potato. It was a great toy! The Hasbro manufacturers made modifications over the years, eventually including a large potato “body” made of plastic, plus redesigned blunt attachments for the parts (eliminating the risks of piercing bare feet from stepping on pieces left on the floor). The latest news: beginning in February 2021, the brand name for this still popular toy has become gender neutral. Simply: Potato Head. Doesn’t have the same gravitas. Still, a mark of modern times–and of our appreciation for potatoes. 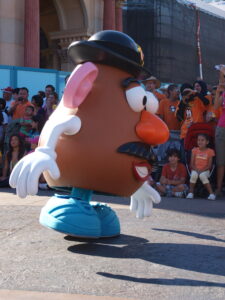 Mr. Potato Head at a parade

Photo of Mr Potato Head at a parade, 2010. https://commons.wikimedia.org/wiki/File:Mr_Potato_Head_at_a_parade.jpg