Who left the earliest footprints in rocks that we can admire today? From the giant tracks of enormous dinosaurs to the delicate prints of small lizards and birds, I think footprints are fascinating. Tracks preserved for tens of millions of years, as well as those left within hours, can tell interesting stories about people, animals, and their interactions. Who left those tracks and what were they doing?

We know fossil footprints as ichnites, from the Greek word for track, trace, or footstep. They are trace fossils, a category that includes burrows, borings, and fossilized feces (coprolites), along with footprints–and they provide a record of biological activity. A group of unrelated animals may produce similar tracks, so trace fossils are indicators of organism behavior, and not of the biological affinity or specific type of creature. Trace fossils are therefore classified by appearance.

Gigandipus and Eubrontes, for example, are three-toed dinosaur tracks recognized for species that lived during a time span of several tens of millions of years. We associate these tracks with therapod dinosaurs that were characterized by three-toed limbs and hollow bones. Information about how these creatures moved about (speed, weight, behavior), as well as the company they kept–solitary, versus traveling in packs–can be gleaned from trackways. Some Eubrontes fossil footprints may have been made by the genus Coelophysis–the same dinosaurs that were excavated from an exceedingly rich fossil quarry at Ghost Ranch in New Mexico. The large group of dinosaurs that died there together may have been gathered around a pond when they were overtaken and drowned in a flash flood (check out my blog post about this, here: https://roseannechambers.com/dinosaurs-of-ghost-ranch/ .) 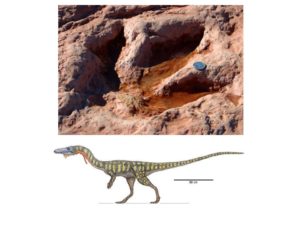 Fossil footprint of Eubrontes and restoration of Coelophysis, the dinosaur who may have made the print

Fossil footprints are preserved best in sandstones, mudstones, and occasionally volcanic ash deposits. At the time an individual made the footprints, it would have been walking across soft and probably wet ground, which later hardened sufficiently to preserve the indentations. Soon afterwards, a protective layer of sediment would be needed to cover the impressions. A dust storm or sandstorm, or a rise in water level that deposited a layer of mud, are potential sources for the sediment cover.

Not all fossil footprints are the actual depressions–some are the reverse, as bulges which are essentially castings of the footprint. This can happen because different grain sizes vary in speed of weathering, so if softer materials containing the prints are eroded away around the more resistant sediments in the print, a cast of the original footprint will be present. In the photo below, the dinosaur that made the print was likely walking in soft mud, which was more readily eroded away, leaving the more resistant sandstone that filled the prints. 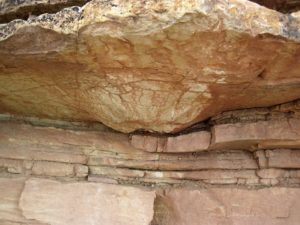 Dinosaur footprint bulge in sandstones in the Morrison Formation, Colorado

Tracks are ephemeral–once the protective layers of sand, silt and clay that envelop them are removed and the prints are exposed to wind and water, they can degrade rapidly.

Scrolling back in time, who left the first footprints? More specifically, who had the first feet? Since feet appeared several hundred million years ago, the picture is murky. (And it could change; in paleontology, as well as in many other areas of scientific research, new findings force us to revise what we think we know about history.) The earliest undisputed evidence of life forms on Earth date back to at least 3.5 billion years ago, but these earliest ocean-dwelling organisms were simple single-cell or small multi-cell types. Feet appeared in an event approximately 540 million years ago, known as the Cambrian explosion, when virtually all major animal groups suddenly appear in the fossil record. 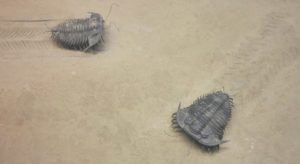 Trilobites and “tire track” traces from their multiple feet in a museum exhibit at World Museum Liverpool, England

Trilobites, those exotic arthropods that are related to modern scorpions and crabs, appear in the fossil record around 530 million years ago. They had from two to four pairs of segmented legs and left behind trackways known as Diplichnites. Trilobites were primarily marine organisms, although trackways suggest that some might have ventured out of the water and onto land.

Among the earliest to have clear adaptations for walking on land was another arthropod, a millipede-type critter with long slender legs known as a myriapod (Pneumodesmus newmani). The oldest dates from around 428 to 414 million years ago (Silurian/Devonian) and was found in Scotland. This fossil specimen contains openings in the cuticle, or outer shell, that are interpreted as tracheal tubes and that show this animal could breathe oxygen.

Around 50 million years later, paleontologists recognize the first known vertebrate to walk on land. Known as Tiktaalik, it is a lobe-finned fish with typical scales and gills, but also with unusual fins. Along with the normal thin bones in the fins are wrist-like features and attachments connecting to sturdy weight-bearing shoulder bones. These would have allowed this creature to prop up in shallow water or on land and use its limbs for support. The broad and flat head contained structures that suggest primitive lungs were present (probably evolved from swim bladders); there is a more robust ribcage that could have helped support the animal’s body when it left its aquatic habitat; and an early neck, allowing more freedom to hunt prey on land or in the water. Paleontologists found Tiktaalik in 2004 on Ellesmere Island in Arctic Canada and the fossils were about 375 million years old (Devonian). 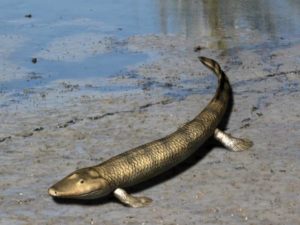 Life reconstruction of Tiktaalik roseae— most likely, the 375 million year old common ancestor we share with other animals

The anatomical features of Tiktaalik clearly mark the transition from swimming fish to four-legged or two-legged, land-dwelling vertebrates. So yes–our feet began their evolutionary journey in the probable common ancestor of amphibians, reptiles, birds, and mammals–a lobe-finned fish! One of the paleontologists who discovered Tikaalik, Neil Shubin, wrote an excellent book called Your Inner Fish. He describes the fieldwork that led to the discovery of these important fossils, and how human hands and feet, plus other appendages and organs, link back to our distant ancestors.

The giant tracks left by dinosaurs have fascinated and perplexed people for thousands of years! While writing about the geology of the Andes Mountains, I learned about a fossil bed referred to as a “dinosaur dance floor” in Bolivia. I believe this is the site called Cal Orck’o, where mapping has indicated over 12,000 individual dinosaur tracks in 465 trackways. Impressive! Tracks have been found in at least nine stratigraphic levels across a near-vertical slab of limestone assigned to the Cretaceous El Molino Formation (roughly 70 million years old; Maastrichtian). 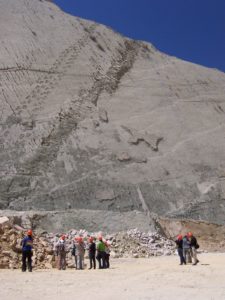 We find dinosaur tracks worldwide, since many of these reptiles lived during a time when continents were connected into the single giant landmass known as Pangaea. Many trackways are found in western North America, especially notable in the Morrison Formation of Colorado, Wyoming, and Utah (circa 156 to 146 million years old; Late Jurassic). We also find impressive trackways in parts of the eastern US, plus in Brazil, Namibia, Zimbabwe, China, and Australia.

The best way to find fossils of a particular type is to look in geologic units of the appropriate age. While in Arches National Park in Utah a few years back, I learned about a dinosaur footprint locality in a remote section of the park. I decided to look for those, plus search for dinosaur prints on my own. A friend and I hiked across the geologic units surrounding the Morrison Formation until, convinced that we were in those dinosaur fossil-rich rocks, we examined outcrops carefully in our pursuit of footprints. Somewhat surprisingly, we actually found what appeared to be a cast of a large, three-toed footprint–very exciting! Although I can’t be certain it truly was a dinosaur footprint, it was in the right place and time/geologic unit.

And A Few More Tracks

As an avid hiker, I’ve seen many types of recent tracks–from those left by raccoons and deer alongside muddy puddles, to mice and lizards that scampered over sand dunes, to even large grizzly bear and moose prints. Walking along the wet sand of a beach often displays the footprints of those who have walked there just before me–specifically, other people, occasionally accompanied by their canine companions. Sometimes I’m curious about their stories–as well as those stories behind human footprints that are many thousands of years old. More about those in another post!

Photo of Eubrontes, a footprint of a theropod dinosaur, preserved in the Moenave Formation (Lower Jurassic), near Tuba City, north of Flagstaff, Arizona. Scale: The coin is a US quarter dollar (25¢, diameter: 24.26 mm, 0.955 in) comparable in size to a 50 euro cent coin; the maximum width of the footprint is about 30 cm (1 ft); 2003, by John Sullivan. https://commons.wikimedia.org/wiki/File:Dinosaur_track.jpg

Illustration of a life reconstruction of Tiktaalik roseae, 2016 by Nobu Tamura.  https://commons.wikimedia.org/wiki/File:Tiktaalik_NT_small.jpg

Photo of dinosaur tracks in Bolivia, 2003, by Jerry Daykin. https://commons.wikimedia.org/wiki/File:Dinosaur_tracks_in_Bolivia_2.jpg